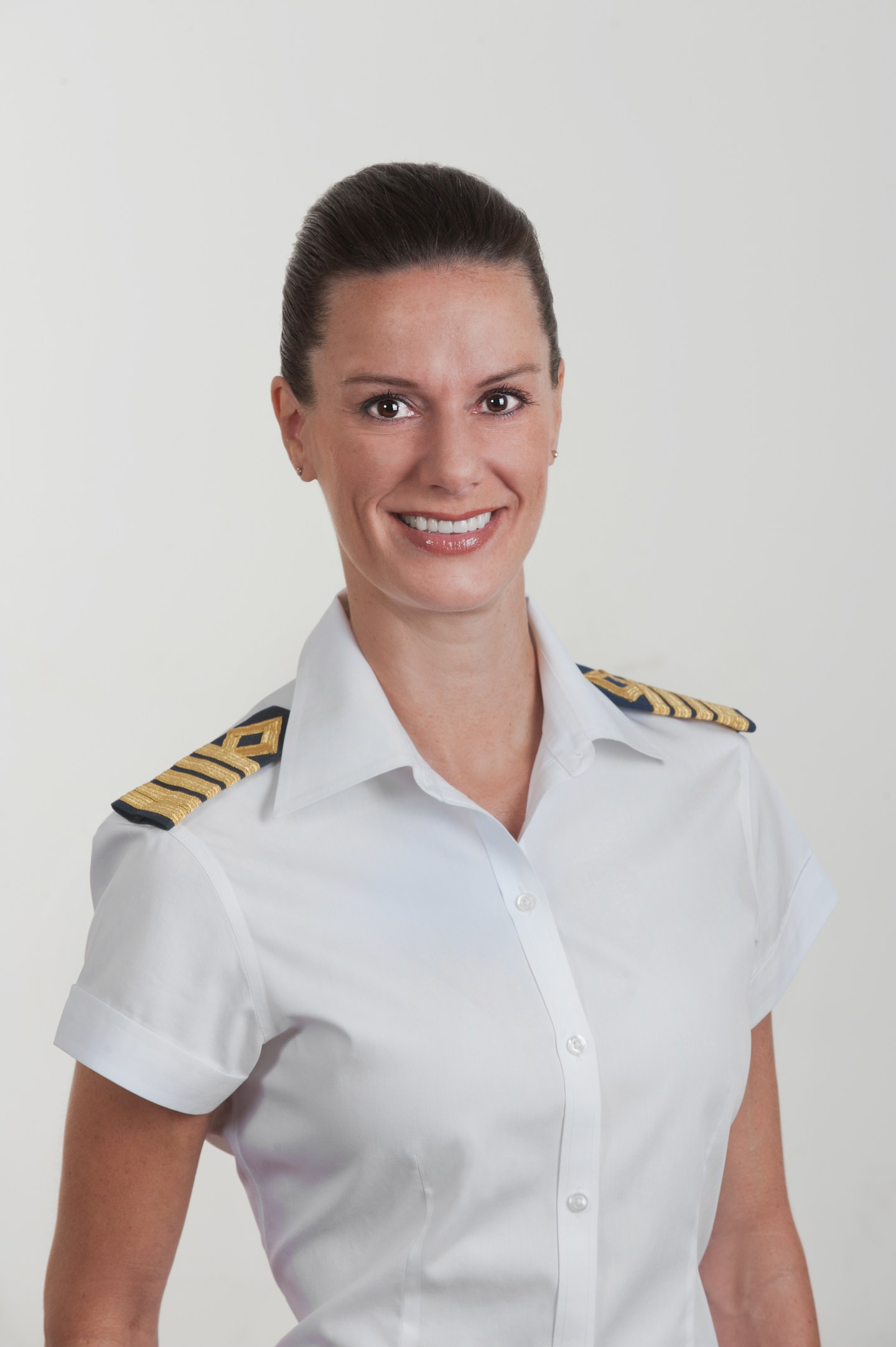 Earlier this week, Celebrity Cruises made a major announcement: For the first time in the cruise industry, an American female would be captaining a mega-ship. Before she takes on the mantle this summer, we chatted with Kate McCue about her first cruise, making history, and the surprising thing she misses when she’s out at sea.

Do you remember the first cruise you went on?

My parents took me on a cruise when 12-years-old—we went on a four-day cruise to the Bahamas, on the Premier Cruise Line’s Atlantic. It was the big red boat, and affiliated with Disney. I remember when my mom brought home the brochure, with the schematic of the ship inside. She hid it under the bed because she wanted to show us at dinner, and we found it. I remember thinking, “How cool is this?” and that was even before we got on the ship. As a 12-year-old, there were so many things to do. We’d never done anything like it before, and it was probably the most special vacation that I had growing up. I told my dad that I wanted to be the cruise director—the person that plans the fun events on board—and my dad said, “You can do anything you want in the world, including drive the thing.” The seed was planted then.

How did your cruising career begin?

I graduated from California Maritime Academy with a business administration degree as well as a third-mate unlimited U.S. coast guard license—which means I could sail anything from a tug boat to a super tanker. I started with Royal Caribbean [which owns Celebrity] in 2003 at the bottom as a second officer, and I worked my way up to first officer, chief officer safety, and staff captain, which is the deputy to the captain and second in command.

When did you realize that becoming the first American female captain was an attainable goal?

Since I started working at Royal Caribbean, 12 years ago. 2007 was a pivotal year because Captain Karen, who is Swedish, was the first female to be promoted to captain in the cruise industry. Luckily, I was working for the same company. My captains became my mentors from the day I stepped on the ship, and they always assumed I would be captain one day.

How will your duties change from staff captain to captain?

As staff captain, I was in charge of safety, security, and the ship’s overall appearance when it comes to the deck. As captain, a few more departments will report to me. The chief engineer will be my direct report, and all the technical areas on board, including refrigeration, electrical, propulsion, and the hotel department—the largest on board, covering food and beverage, all the revenue areas, casino, shops, spa, housekeeping, guest services, and information technology.

What are your goals as you take over the Celebrity Summit?

I’m going to be a visible captain. With all the publicity surrounding it, I want to make sure I’m out there and meeting expectations, not only for guests but also for our crew.

Do you foresee any challenges as captain?

It’s an incredible opportunity, and I’m proud to be in this position. It might be a challenge to learn 2,000 guest names on a weekly basis and 1,000 crew at a time, but I’m up for it.

Where will the Celebrity Summit sail?

She’ll do three different itineraries, from Bayonne, New Jersey, to Bermuda, then up to Canada and New England for three 14-night cruises, and then down to San Juan, Puerto Rico, to do the southern Caribbean cruises in the winter months. The Canada and New England run is completely new to me, and I’m really looking forward to it. It goes to Boston, Portland, Quebec, the Prince Edward Islands, and Nova Scotia.

Is there anything you miss when you’re out on the waters?

I DVR a lot of programs to catch up on. I’m a reality TV junkie, and when I get home I have to watch the Bachelorette and my housewives. But when you’ve got all the different restaurants on board, there’s nothing I can honestly say I miss as far as food wise. There are more things I miss from the ship when I go home—I have to make my own bed and do my own laundry!