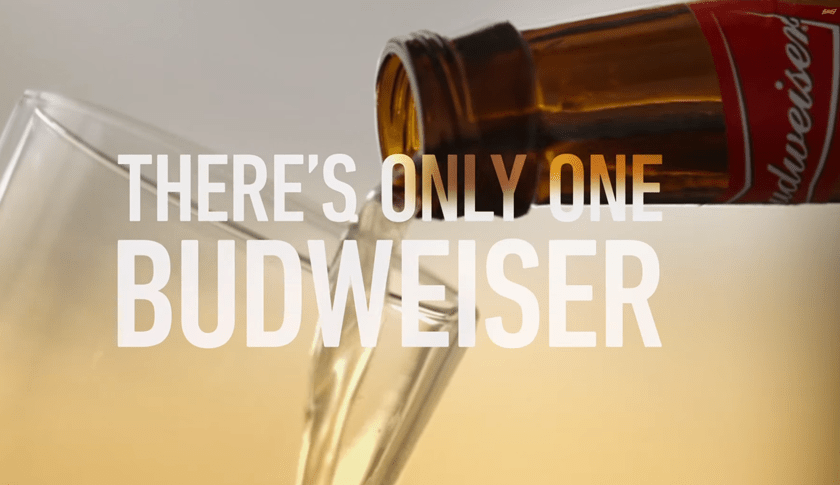 It started in February. During the third quarter of the Super Bowl, Budweiser rolled out a new spot dubbed “Brewed the Hard Way.” Only instead of featuring Clydesdales, puppies or any of the brewer’s marketing typical touch points, this one aimed a cannon at craft brewers.

The ad was roundly criticized online. Craft drinkers took particular glee at the tagline — “Let them sip their pumpkin peach ale. We’ll be brewing us some golden suds” — since Budweiser’s parent company had recently acquired a brewer that made just that sort of beer.)

But everyone expected it was little more than a tempest in a teapot. In the months since, however, Budweiser has seemingly doubled down on its marketing campaign against craft beers.

In April, the company began running its Bud & Burgers campaign – with a TV commercial that pairs the two in fairly typical fashion – until the last 10 seconds of the 30 second ad.

A burger is shown with a tulip glass of dark (presumably craft) beer with the overlay “This could be a debate.” A hand quickly replaces that tulip glass with a Budweiser as the words change to “But it’s not.”

Nobody cheers for the guy who brings a watermelon wheat beer. #ThisBudsForYou pic.twitter.com/4OZ7vEgcwj

And people tweeted their disapproval.

@Budweiser False. No one cheers for breweries who take shots each other. There's enough room for everyone.

Budweiser did not respond to requests for comment. But it’d be a mistake to think the company is making these ads recklessly. Every time the craft beer world gets worked into a lather over one of these spots, it helps spread the Budweiser name. The fact that you can get a reaction today at the mere mention of that Super Bowl ad, which (with its lack of humor or cute animals) would likely have been long forgotten by this point, is actually pretty astonishing.

Will the ads convert craft drinkers over to Bud? Of course not. But they could nudge Bud drinkers who were starting to edge toward craft back to macro beers – especially if the reaction of craft drinkers creates an aura of beer snobbery. More importantly, it could keep them away from switching their allegiance to MillerCoors, which, as Fortune recently reported, sold 43 million more cans of Miller Lite in the second half of 2014 than it did in the same period of 2013.)

It’s a textbook case of preaching to the choir.

And that choir could use a pep talk. Craft brewers now produce roughly one out of every 10 beers sold in the United States – and the number of craft breweries is growing at a tremendous pace. Last year, there were 3,418 craft breweries operating in the U.S. Compare that to just 44 breweries (large and small) in 1980 and 537 in 1991. By the end of the year, experts say, there will be a new craft brewery opening in the U.S. every 12 hours.

Still, the gap is huge. Craft overall remains far, far behind the beer sales volume of companies like Anheuser-Busch or Miller-Coors. In the larger beer category, Yuengling (technically the largest craft brewer) is just the fourth largest brewery in the county – with Pabst taking third. And A-B and Miller-Coors, says Bart Watson, staff economist for the Brewer’s Association, are “in another dimension than Pabst.”

Still, while the ad campaign might be turning heads (and may or may not be Budweiser’s way of tending its flock), it’s also strengthening the bond of craft drinkers and craft brewers. And, in the long run, that could be more of a problem for macro brewers than they imagine.

If you’re one of those Bud drinkers who’s curious to see what all the fuss is about regarding craft beer, here are a few good ones to start with.

Hell or High Watermelon – Sorry Bud, I’d cheer the guy who brings this, too. 21st Amendment’s offering is crisp, dry and not overly sweet. The watermelon notes blend wonderfully with the lighter wheat tastes and come on strong at the finish. (ABV: 4.9%)

NoDa CAVU – Funny name. Good beer. It’s a blonde ale that offers a nice blend of tropical fruits with a slight spiciness. It’s light- to medium-bodied, with more of an emphasis on malt than hops – which macro beer drinkers might find easier to handle. (ABV: 4.6%)

Lagunitas Pils – The Lagunitas name usually means to get ready for some serious hops. This Czech-style pilsner, though, downplays those, focusing more on the yeast and malt. Best served cold, it’s not overly complex, but still has a crisp taste. It’s a good way for macro beer drinkers to transition into the world of craft (though they should be prepared for the higher alcohol volume as they make that step). (ABV: 6.2%)