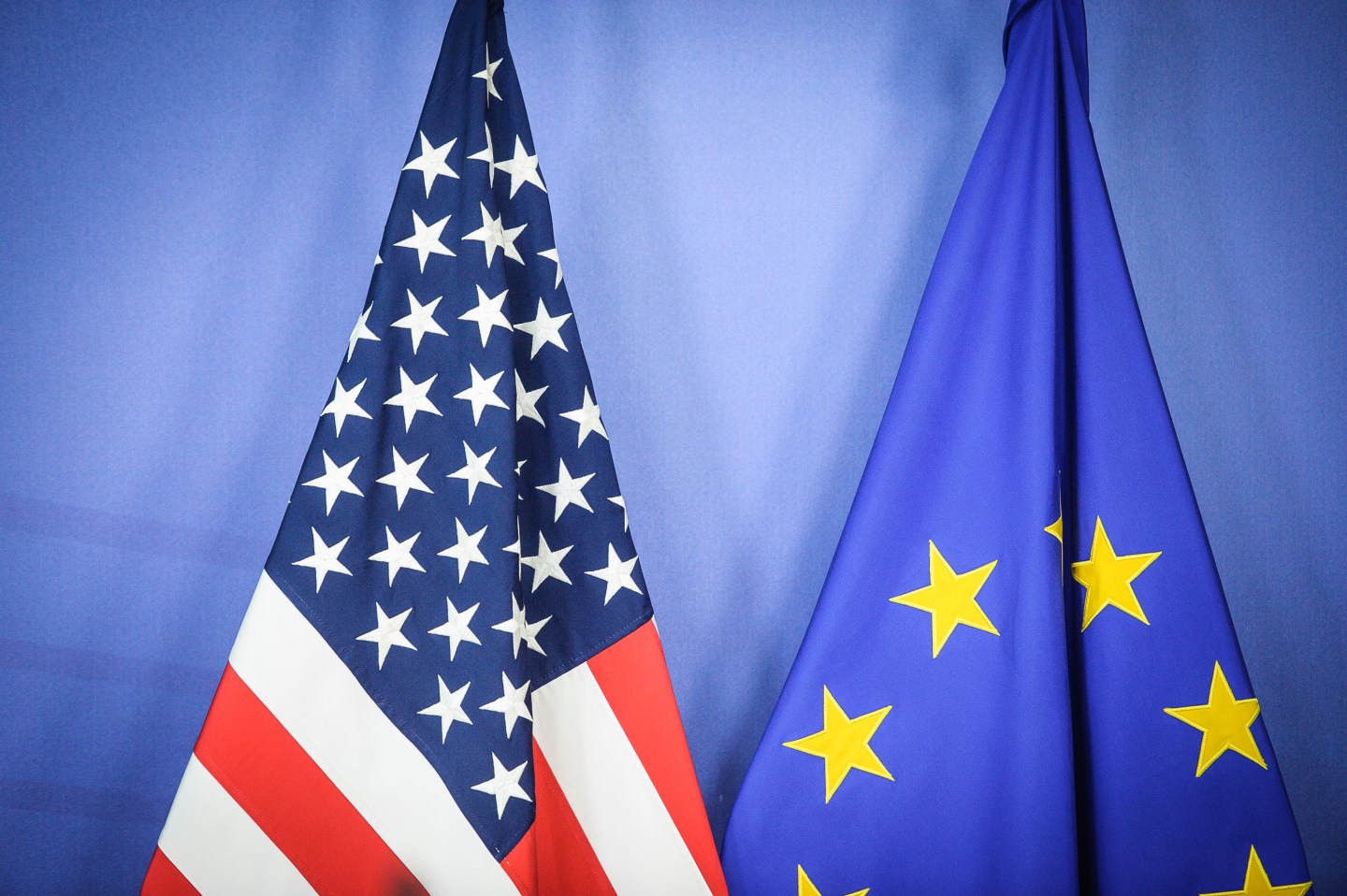 US and EU flags seen during Treasury Secretary Jack Lew a press conference after a meeting at EU Commission headquarters in Brussels, Belgium on 26.01.2015 Lew said the US economy still needs pushing to continue growth, and that US alone could not lead global economic recovery. Reports also state Lew said Greece is moving on to solve their problems after having to make tough decisions. In the meantime, European financial markets on Monday shrugged off the news that the anti-austerity SYRIZA party had emerged as the victor in Greece's national election, with both shares and the euro gaining ground. by Wiktor Dabkowski Photo by: Wiktor Dabkowski/picture-alliance/dpa/AP Images
Photograph by Wiktor Dabkowski — picture-alliance/dpa/AP

The European Commission is looking into the business practices of Qualcomm (QCOM), the world’s largest provider of the chips that power popular mobile devices.

The first line of inquiry is into whether the San Diego, California-based company breached European antitrust rules by parlaying its dominant position by pushing customers to source all or nearly all of their “baseband” chipsets from it. Baseband chips are the wireless radio chips.

The second will look into whether Qualcomm used predatory pricing to rid the market of competitors. That practice means the vendor offers prices below its own costs in order to drive rivals out of the market.

“We are launching these investigations because we want to be sure that high tech suppliers can compete on the merits of their products. Many customers use electronic devices such as a mobile phone or a tablet and we want to ensure that they ultimately get value for money. Effective competition is the best way to stimulate innovation.

In response Qualcomm said via email:

We were informed that the European Commission has taken the procedural step of “initiating proceedings” against Qualcomm with regard to the two ongoing investigations into Qualcomm’s sale of chipsets for mobile devices. This step allows investigators to gather additional facts, but it represents neither an expression by the Commission on the merits of the case nor an accusation against the Company. While we were disappointed to hear this, we have been cooperating and will continue to cooperate with the Commission, and we continue to believe that any concerns are without merit.

The company could face fines of up to $2.5 billion or 10% of its global revenue, according to The Wall Street Journal. Qualcomm is the market leader in chipsets that handle the voice and data communication functions in smartphones and devices.

In February Qualcomm has to pay a $975 million fine to settle an antitrust probe in China and lowered the amount that companies had to pay to license its radio technologies. That settlement was seen as a way to lower the cost of deploying mobile networks in China, but it would also have the advantage of protecting Taiwanese chip company MediaTek, which competed with Qualcomm in selling mobile chips.

South Korea has also taken Qualcomm to court over its market dominance and its regulators had met with Chinese regulators after they had settled with Qualcomm over the fine. Qualcomm’s chip dominance and high royalty rates have long been a sticking point in the industry and the mobile industry has moved from CDMA to LTE where Qualcomm’s patent stranglehold isn’t as intense, so there is more room to negotiate.

EC regulators have been busy of late, launching probes into the business practices of Google, Amazon, Apple and Starbucks.

This story was updated at 1:56 p.m. with Qualcomm’s statement