Black Friday-style price war between Target, Amazon and Walmart breaks out in July 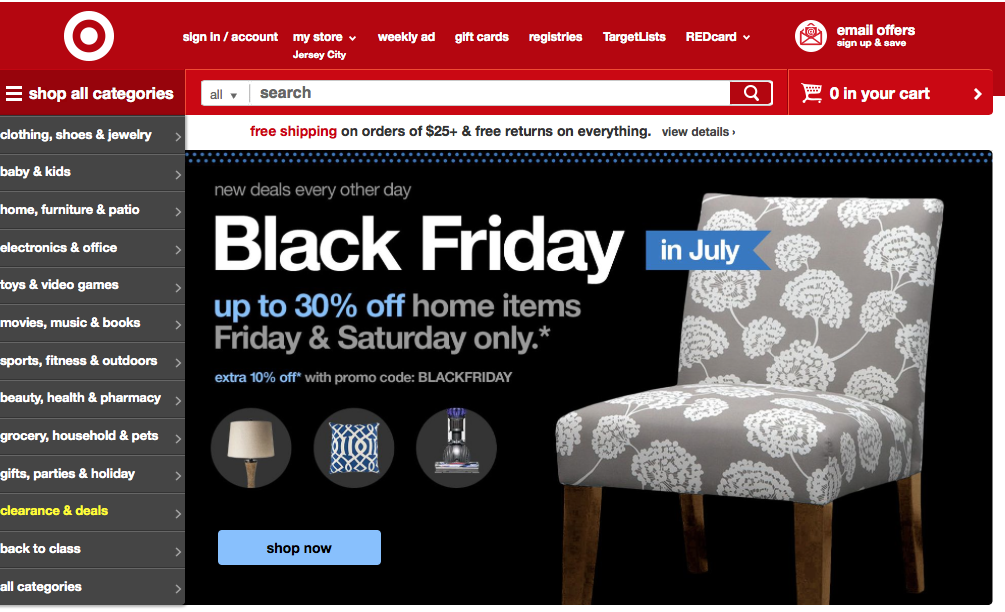 For the sixth year in a row, Target (TGT) is holding its “Black Friday in July” sale this week. Amazon.com (AMZN), meanwhile, will hold its Prime Day sales event on Wednesday, a promotion aimed at bolstering its subscription service that the online retailer promises has “more deals than Black Friday.”

It may seem premature for two of the largest U.S. retailers to evoke the “Black Friday” madness normally associated with Thanksgiving. We are not yet even at the peak of summer, and the Back-to-School season is barely underway. But with retailers under pressure from tight consumer spending, it is not surprising to see them resort to such tactics.

Others are doing similar things, not just in July but throughout the year. J.C. Penney’s (JCP) weekly circulars regularly tout “door busters,” a term that connotes the madness of the major discounts aimed at getting shoppers in stores for Black Friday sales. Penney starting using that term more aggressively outside of the holiday season in 2013 when it was desperately trying to stop a sales bleed.

At Macy’s, (M) terms like “doorbuster, web buster, One Day Sale and Super Saturday” are part of the year-round nomenclature at the department store, according to a spokesman. “Super Saturday” is the industry’s term for the last Saturday before Christmas, typically the busiest shopping day of the year, so it’s odd to see a run-of-the-mill Saturday in April win that designation.

The question is whether this “language creep” will end up blunting the effectiveness of such terminology during the actual holiday season, when retailers get up to 30% of their annual sales and 40% of the profit.

The risk is even greater given that the holiday season itself is starting earlier and earlier — last year, Target and Walmart (WMT) kicked it off with early Black Friday sales on November 1. If retailers start the season around the same time this year, then that means we are only 11 weeks away from the kickoff to the holiday season madness — ergo the risk of fatigue.

“It is a strategic mistake. They are getting shoppers accustomed to seeing that level of promotional offers the whole year,” said Jenny Parris, vice-president of global marketing and product at Stored Value Solutions (SVS), a consultancy that helps top retailers optimize their promotions and gift card programs. She was referring to retailers in general. What’s more, using terms like “door busters” and “Black Friday” all year de-sensitizes shoppers to them, a risk during the actual Christmas period.

Still, the fact that the merchandise sold this weekend at Amazon and Target will obviously be different from what will be offered for the holidays mitigates the risk that this summer gimmick steals sales from that period. (Last year, the Black Friday specials in early November hurt sales over Thanksgiving, by simply bringing them forward.) Target, for one, doesn’t expect Black Friday in July to be a detriment.

“The days leading up to and just after Thanksgiving continue to be one of the busiest shopping periods of the year, and we expect that to continue this year as well,” a Target spokeswoman told Fortune.

At the same time, no retailer wants to risk being left behind. Walmart is holding its own Black Friday-like sale with 2,000 online “rollbacks” — Walmart jargon for discounts — on Wednesday to compete with Amazon’s Prime Day, and is reducing the minimum order for free shipping from $50 to $35 for at least 30 days. It even takes a jab at Amazon in its web site.

It’s beginning to feel a lot like Christmas indeed.