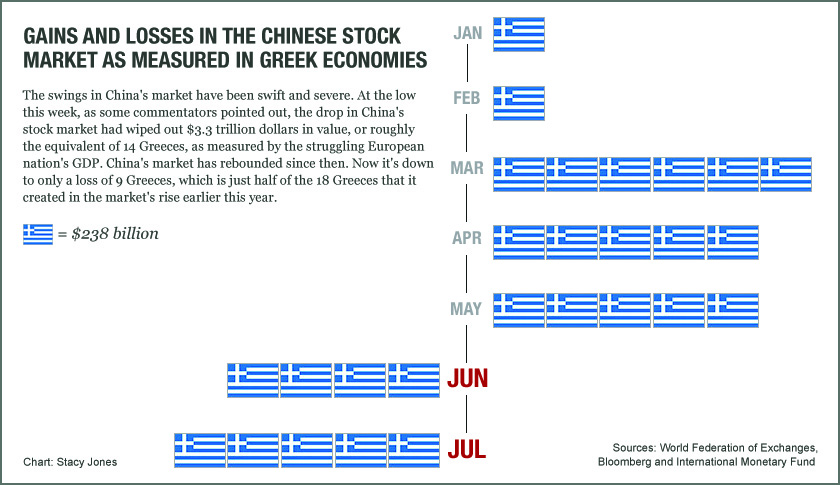 In the span of a week, investors have been flung from worrying about Greece to China and now back to Greece, with a brief stop at the New York Stock Exchange in between.

Earlier this week, in a mashup of economic woes, a number of commentators pointed out that the $3.3 trillion that had been lost in China’s market swoon made up the equivalent of 14 Greeces, as measured by that country’s GDP. Nice stat! China’s market has since recovered a bit. So we are now down to $2.1 trillion in lost wealth, or roughly nine Greeces, since mid-June. So that’s good news. But also still a lot of Greeces.

The comparison highlights two points. First of all, China is much, much bigger than Greece. China’s GDP of about $10.5 trillion is 43 times bigger than Greece’s, which is $238 billion. So we should care much more about the economic woes of China than those of Greece. The second point of the comparison was to say, hey, look at just how much wealth has been lost in China. That’s got to have an impact on the economy, not just the market.

But that’s not really the case. Yes, China’s stock market drop has destroyed a lot of Greeces, if you want to measure it that way. That seems bad. But take a step back. China’s market run up before the crash also created a lot of Greeces; 18 of them, to be precise. That should have been great for China’s economy, but it wasn’t. Even as the Chinese market soared earlier this year, retail sales continued to fall.

“There was no sign of a wealth effect when the market was up 100%,” says Andrew Rothman, investment chief strategist for the Matthews Asia fund, one of the largest U.S. mutual funds focused on China. “We won’t see much of one on the way down either.”

Second, stock market wealth is not like GDP, or economic, wealth. Economic wealth is created, passed along, and spent elsewhere. Stock market wealth can boost spending, but it tends to mostly stay in the market for long periods of time, or until it is wiped out.

Yes, Greece is small, but its economy is contracting and is likely to continue to shrink whether it makes a deal to stay in the euro or not. And that will have knock-on effects for the rest of Eurozone economy, which is big, about 80% bigger than China.

China’s economy is still growing, though more slowly than it used to, at nearly 7% a year. So China is expected to create nearly three Greeces in actual GDP this year. That will matter more than the nine Greeces or so it lost in the market.