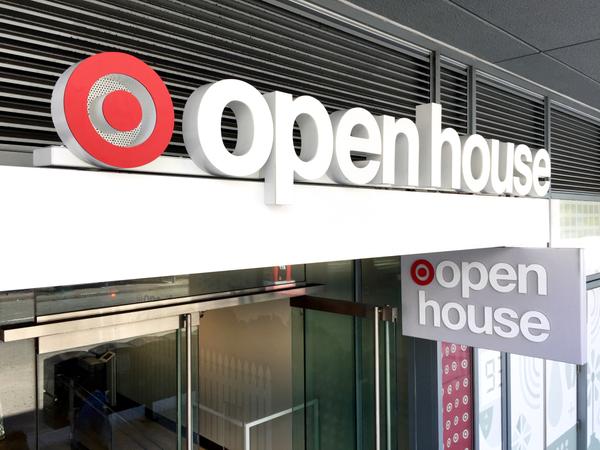 Target has opened a new retail space at the base of its Metreon City Target near San Francisco’s Moscone Center, and if you’re a fan of the smart home, clear acrylic furniture, or grand retail experiments then this is the place to be. The Minneapolis retailer is calling this Target’s Open House and it is the big box chain’s lab to figure out the challenge that is selling the smart home to the mainstream consumer.

The concept of a smart home has gathered a lot of hype and generated some amazing (and insane) new products—many of them designed by venture-based startups. Big box retailers such as Lowes’ and Staples have launched their own line of home automation and connected home products, while Home Depot signed a partnership with Wink, while also promoting products such as the Nest thermostat, Rachio sprinklers, and products from other startups.

Best Buy has an agreement with SmartHome Ventures that makes a home automation hub and software called Peq, but Target had mostly stayed out of the frenzy. It sold the Wink home hub and few connected products such as Sonos speakers, but it wasn’t adding consumer education workshops or building dedicated displays to show consumers how the smart home works as some of the other retailers did.

But with the Open House concept store, which opens tomorrow, Target may have done one better than the physical retailers and even Amazon’s own home automation channel. It has built an entire home that rivals the demos that many of these smart home companies roll out for large trade shows such as CES and conveys a similar depth of information that Amazon can provide about products. Inside Open House you’ll find connected light bulbs, baby monitors, sprinklers, doorbells, and more. They are displayed in rooms featuring the clear plastic furniture, which is actually an amazing showcase for the color-changing Hue light bulbs from Philips and on interactive tables that are new to the retailer.

David Newman, director of enterprise growth initiatives and head of Target’s San Francisco office, says that the Open House concept has products from about 50 vendors. But the Open House isn’t a traditional retail environment in many ways. The products it stocks can be complicated. The promise of the connected home is that the devices connect. But today, figuring out how to do that and which devices work together requires more research than many consumers would even put into buying a car. The other challenge is that consumers have no idea what they want in a smart house, because everyone’s use cases are different.

A parent of an infant might be excited to have the Mimo baby monitor linked to a Sonos speaker so when a baby cries the Sonos automatically starts generating soothing white noise. Meanwhile, the parent of a toddler might want a Hue bulb so they can use the light’s color as a way to show the child when it’s okay to wake up mommy or daddy in the morning. A fitness fanatic might be pumped to link her Jawbone to a Nest thermostat so when she gets home from a run, the house is a more comfortable temperature.

The options are endless, but most people won’t spend hundreds of dollars on connected devices until they have a good reason. So far retailers and marketers at product companies have struggled to convey those reasons. With Open House Target has shown off both the creative use cases and found a way to show consumers how to bring their new devices together to make them work. Newman also told Fortune that the company plans to offer a generous return policy at the Open House because it’s a chance to get consumer feedback on the product and the experience.

“If something came back and wasn’t working for someone that’s an amazing opportunity to conduct consumer research,” Newman said. “Because we’re working closely with our manufacturers we have the opportunity to take very obvious issues like we sold 12 of these and nine of them have come back, and we can take it off the shelves and work with them to figure out what’s wrong.”

Startups will benefit from this feedback as will Target. And it takes a lot of the risk away from consumers who won’t be worried about a device that fails after two months in the field or faces a restocking fee for a product that just didn’t work as advertised when it came home. However, Newman is very clear that startups working with Open House aren’t necessarily on a path to shelf space at all Target stores nationwide.

“We are not Target in terms of the core daily operations at Target stores. We are not the merchants. Our team is here to try to look at the thing that are most emergent and have a single location where we can do fast and quick partnerships,” said Newman. “Yes, they have the benefit of working with Target. However this is not step one in getting to the five, ten, 50-store pilot.”

The upside of this is that consumers might pop into the Open House at Target and meet the CEO of the next hot consumer products company showing off a prototype gadget in search of consumer research and see gadgets in real life that they just crowdfunded on Kickstarter a few months before. That also gives Target some cachet among consumers who are interested in the hot new thing, especially as technology becomes an integral part of more products. Additionally, for Target the Open House isn’t just a way to explore the connected home, it’s also a place to test out new ways of retailing in general.

“First and foremost it’s about IoT [the Internet of things] but any team can come in and test things for the broader Target stores,” Newman said.

Newman didn’t go into too many details, but he said that the interactive tables are new to the store and tests here might mean they pop up elsewhere in the chain. The store will also be a proving ground for new types of retail analytics. Right now the company is measuring where people tap on the interactive surfaces and in apps, but it could eventually place sensors on devices or the device mounts to see what products are most interesting to users. In that way, this store isn’t just about the smart home—it’s also a pioneering smart store.