Only divine intervention can end this Greek tragedy 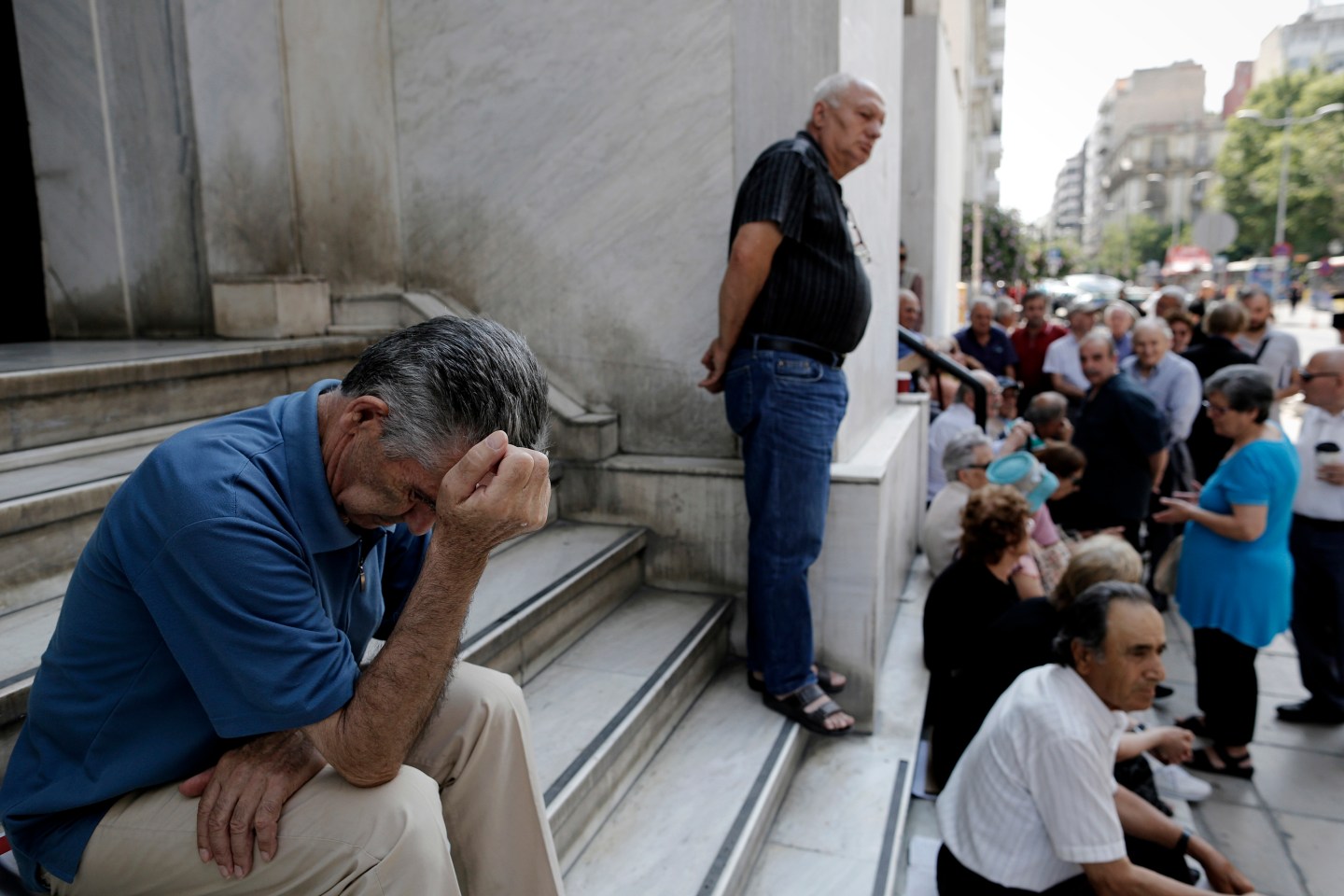 Pensioners sit and wait on the steps outside a closed main branch of the National Bank of Greece SA in the hope that it might open in Thessaloniki, Greece, on Monday, June 29, 2015. Greece shut its banks and imposed capital controls in an announcement designed to avert the collapse of its financial system, heightening the risk it will be forced out of the euro. Photographer: Kontantinos Tsakalidis/Bloomberg via Getty Images
Photograph by Kontantinos Tsakalidis — Getty Images

We’ve watched the situation in Greece spiral, and following last Sunday’s resounding “no” vote, the Greek economy is now at the brink of complete desperation. Banks have been closed for 11 days. Depositors can withdraw only 50 to 60 euros per day. Pensioners form long lines to get 120 euros, a fraction of their pension. Business is at a standstill with companies giving forced furloughs to employees.

And there are growing worries of shortages of medicines, fuel and food. But what’s worse is the widespread fear that Greece will leave the euro, resulting in a total collapse of the Greek banking system, widespread poverty and an inflationary spiral of the new drachma.

In many ancient Greek tragedies, the hero is saved by the unexpected intervention of a God in an otherwise unsolvable problem. Greece desperately needs the intervention of deus ex machina.

The story didn’t start out as a tragedy. In fact, in spring 2014, after three years of recession, Greece showed signs of recovery with the highest growth rate in the eurozone that year. Only two years after it imposed a 74% haircut on privately-held bonds, Greece was able to successfully issue bonds at 3.5%. Then disaster struck. Because of arcane clauses in the Greek Constitution requiring a 2/3 majority for the election of the president, the life of the successful reformist coalition government was cut short.

Upset and angry with a multi-year recession and high unemployment, Greeks subsequently elected Syriza, an obscure party of the extreme left, in January 2015. Negotiations between the Syriza government and the eurozone lasted over five months. The uncertainty took a very heavy toll on the economy and the prediction of positive growth in 2015 was reversed. In late June, the two sides seemed to converge. But, at the last moment, the Greek Prime Minister Alexis Tsipras did not sign the agreement but brought it to a referendum, urging people to vote “no” to austere bailout terms offered by the country’s international creditors.

Last Sunday, the “no” vote was 60%, despite the fact that an overwhelming 90% of Greeks prefer to stay in the Euro. During the week of the referendum campaign, the multi-year support program of the European Union ended. Fearing the worst, depositors withdrew large sums, prompting the closing of the banks, capital controls and very low withdraw limits.

With chaos descending on Greece, at long last, Tsipras now seems eager to negotiate. He fired the controversial economics minister, Yanis Varoufakis. He also called a meeting of the leaders of all political parties garnering support for the upcoming negotiation. But, at this point, Greece desperately needs two types of assistance. First, it needs a loan of 15 billion euros to be able to pay its obligations to the IMF and ECB, as well as various immediate internal obligations. In exchange for providing a very cheap loan, Europeans will demand that the agreement contains economic reforms, a balanced budget as well as pensions that are proportional to contributions.

Given the insistence of the Greek government in not cutting the very large and inefficient public sector, the only way to meet the fiscal targets will be through heavy taxation. Second, Greece needs a provision of more liquidity by the ECB to shore up its banks. The ECB has made this contingent on an agreement between the Greeks and the Europeans. Thus, the only path that avoids Grexit and chaos for Greece is such an agreement.

There are very significant hurdles to an agreement: it has to be done very quickly between parties that do not trust each other; it has to be ratified by all 19 countries; and its ratification by the 19 parliaments of the eurozone countries can take weeks. Because of these hurdles, Janus Fund’s Bill Gross predicted at Bloomberg a 70% to 80% probability of a Grexit, and the interest rate on 2-year Greek bonds has skyrocketed to 52.3%.

If there is no agreement, Greece will be the first country to leave the “club with no doors,” the eurozone. Greece may also leave the European Union, and its geopolitical position may become uncertain. Besides the catastrophe in Greece, there will be limited adverse economic effects in the eurozone, and Greece will most likely not fully pay its loans to eurozone countries. Additionally, a precedent would be established that may be followed by other countries over time, adding a new factor of uncertainty to the euro.

Finally, the long-term plan of political and fiscal integration of Europe would be in jeopardy. Will this Greek tragedy resolve before the curtain falls? Divine intervention is the only hope.

Nicholas Economides is a professor of economics at the NYU Stern School of Business and has advised the Greek government and Bank of Greece.