Why China’s stock market rout is a bigger problem than you think, in one chart 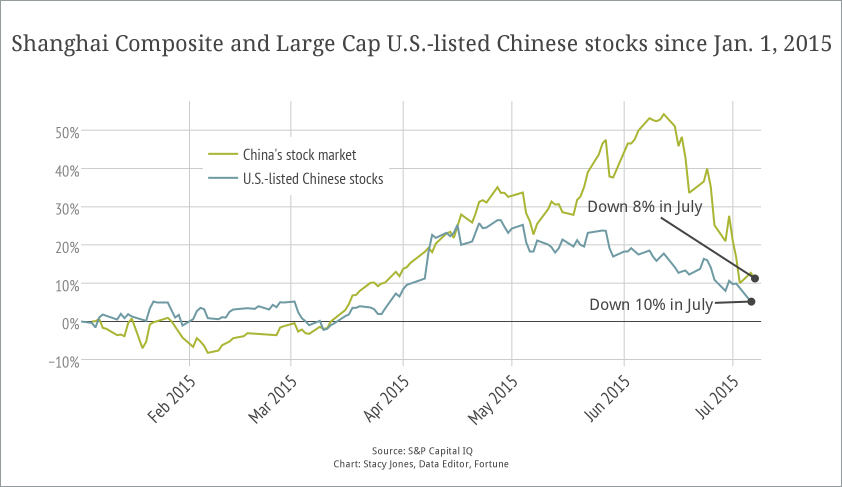 U.S. investors are finally getting a front row seat to China’s market meltdown.

Much of the near month-long collapse of the Chinese stock market, which has sent prices plunging 26%, has seemed like a sideshow to U.S. investors. Stocks in the U.S. in general have mostly continued to go up. And the U.S., Greece, and even Puerto Rico have played a larger role in market news.

The question is, how big of an economic story is China’s stock market stumble? China’s market is volatile. It went up too much and now it is falling fast. The nation’s economy is slowing, but slowly, and likely into a soft-landing, unless the Chinese stock market crash changes that dynamic.

But in the past week, there have been signs that what’s going on in the Chinese markets is not just about the markets, but potentially about China’s economy overall. U.S.-listed Chinese stocks are all of sudden doing worse than Chinese stocks listed on the local Shanghai exchange. Since the beginning of July, the iShares Large-Cap ETF, which is made up of large U.S.-listed Chinese companies including Alibaba (BABA) and others, is down about 10%. Alibaba recently fell to its lowest price since its IPO. The worst performer in the index is 500.com (WBAI), which offers online lottery services to Chinese provinces. That company’s stock is down 40% since mid-June.

The drop in U.S.-listed Chinese stocks signals that what is going on in mainland China’s markets is more than just about stock prices. It could signal that the Chinese economy is in worse shape than we think. At the very least, it suggests that the troubles in China’s local stock market are spreading. Either one is not good. And something that U.S. investors should keep an eye on.