Greece: What happens next? 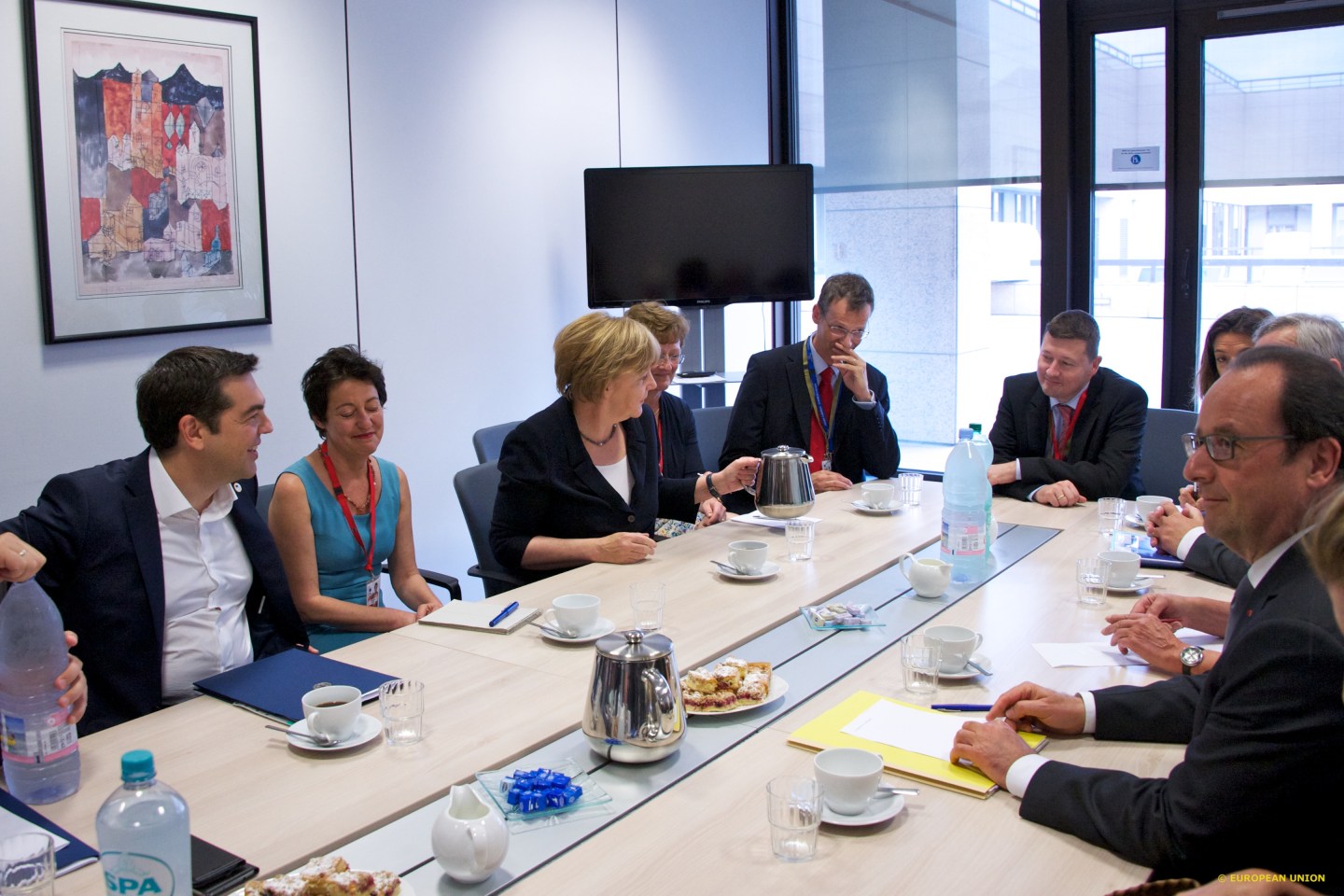 Confused? You should be.

All sides say they still want Greece to stay in the euro, and as long as that’s the case, then there’s always a chance that they will make the necessary compromises.

However, all sides are acting like they would rather Greece were out of it: Greece’s government has made impossible promises about keeping the euro without austerity. The Eurozone’s last offer was a deal that pretended Greece has a realistic future in the currency union without growth. The European Central Bank is pretending that Greece’s banks are solvent, but still refusing to lend them any more money to cover a massive run by depositors.

So where do things go from here?

1. How long can the current deadlock last?

The best guess is still July 20th. This is the day when Greece is due to repay the ECB €3.5 billion. It will miss that payment barring some kind of miracle. On that day, it becomes politically impossible for the ECB to continue making emergency short-term loans to Greek banks. If the ECB won’t take the Greek government bonds as collateral, their value will collapse, and the banks will become insolvent (for supervisory purposes, their current troubles are deemed to be ‘temporary’ liquidity difficulties).

No sensible investor would put new money into a bank in that situation, so you would have to use administrative measures to reduce the banks’ liabilities to a level where they are properly covered by assets. The only realistic ways to do that are to convert deposits into equity, or to “haircut” them. That can either be done by simply writing them down or by redenominating them in a new currency.

2. Is there no hope that the creditors will back off on the demand for austerity?

Actually, yes, there is. The creditors’ red line is to write off part of the money Greece owes them. But they can achieve the same effect by rescheduling the debt so that it’s paid off over a much longer time (say 50 years) and with a long grace period. That way, Athens wouldn’t have to run as tight a budget as is currently being demanded, giving the economy more room to grow. If the economy is growing and the debt level isn’t, then pretty much everybody would be satisfied with that.

But there are a lot of problems even with that. For one thing, Greece is already paying less, proportionately, on debt servicing than countries such as Italy and Belgium (whose coat-tails they would be riding on). For another, it would encourage radicals in other countries, bolstering the kind of tax-and-spend leftism that is anathema to Berlin and the European Commission. And most importantly, growth depends on more than writing debt off. The IMF, which suggested the above idea on debt re-profiling last week, despairs of the Greek government ever reforming enough to generate growth.

German press coverage has started to swing against Chancellor Angela Merkel as the risk of breaking up the Eurozone rises (see above), but it’s happening too late to change a groundswell of public opinion bitterly opposed to lending Greece any more money. Merkel herself said that there are “only a few days left” to avoid the worst as she arrived for today’s summit. In that timeframe, she has more to lose politically by caving in to Greece than by refusing them. The most likely outcome is that she will try to spin a “Grexit” as a measure to strengthen the euro’s credibility. The Eurozone’s political elite would dearly like to believe that, but the evil Anglo-Saxon speculators who dominate global finance will take more convincing.

4. Can anyone else stop Greece being forced out?

It’s clear that governments from China to the U.S. are concerned by what could happen if Greece goes (President Barack Obama has called Merkel and France’s President Hollande in recent days to voice those concerns). There will be major market volatility (and China’s are quite volatile enough already), huge question marks over the future direction of the E.U., another slowdown in its economy (the world’s largest), and a failed state right on the front line of a migrant crisis that is a major humanitarian disaster.

Despite all this, no-one (not even Vladimir Putin or Nobel Prize-winning liberal economists) seems to care enough about the Greek state, in its current dysfunctional form, to save it with their own money.

5. Would Greece be better off without the euro?

Who better to ask than the Greeks themselves? A Bloomberg poll last week showed 81% of people wanting to keep the euro, and only 12% wanting a return to the drachma. That’s because a euro is a hard currency, with real spending power. Nobody knows what the value of a currency printed at will by Greek governments would be worth, but Greeks remember the last one well enough to have very serious doubts about it. For more on what a drachma would be worth – read this by Fortune’s Stephen Gandel.

6. So why did Greeks vote ‘no’ at the referendum?

Because the government’s message–that this was about austerity–drowned out the warnings from the rest of Europe that it was actually about keeping the euro. That suggests that Greeks are still suffering from acute cognitive dissonance, believing that they can keep the euro without the conditions that everyone else in the Eurozone says are necessary.

7. Will Greece cave at the last minute?

Maybe. The government has to pay pensions and public-sector wages again at the end of every month, and it will not be able to gather together the euros to do that after July 20th. So at some stage it has to admit who has ultimate control over the supply of euros. At that point, it could accept the creditors’ demands. But so many of Tsipras’ party would rebel that the country will need new elections and a new parliament to have any hope of implementing a new deal. On the bright side, once Tsipras and Syriza are out of power, the European might be more inclined to grant debt relief. Politics is a personal business, after all.