How many Watches did Apple sell last quarter?—first pass 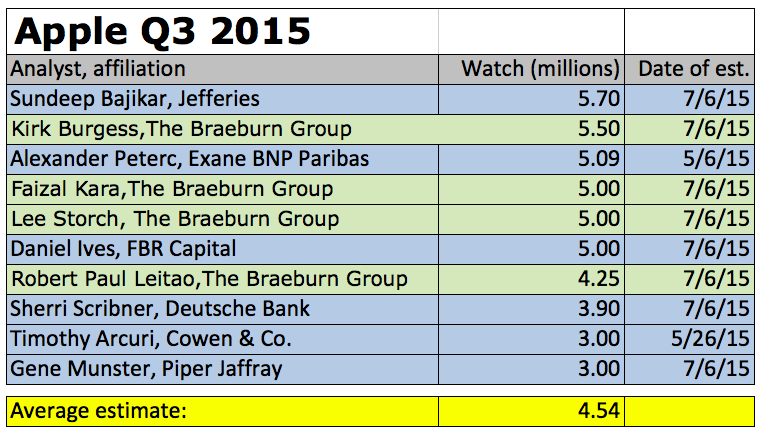 According to Slice Intelligence, which mines e-mail receipts for consumer data, demand overwhelmed supply in April, held steady in May, and trailed off sharply in the last three weeks of June. (see chart below).

Apple hasn’t released any Watch sales data, nor is it expected to when quarterly results are posted later this month.

Meanwhile, we’ve polled our panel of analysts and have some preliminary estimates.

Among the ten heard from so far—six professionals and four amateurs—the estimates range from 3 million units to 5.7 million. Average estimate among this group: 4.5 million.

Pacific Securities’ Andy Hargreaves, having seen the same anecdotal reports of slackening demand, has cut his estimates for both fiscal 2015 (to 10.5 million from 11 million) and fiscal 2016 (to 21 million from 24 million).

Slice’s U.S. data is charted below. It projects an average U.S. sale price of $400, split 64% Sport and 36% Apple Watch. No data were released on sales of the gold Edition.