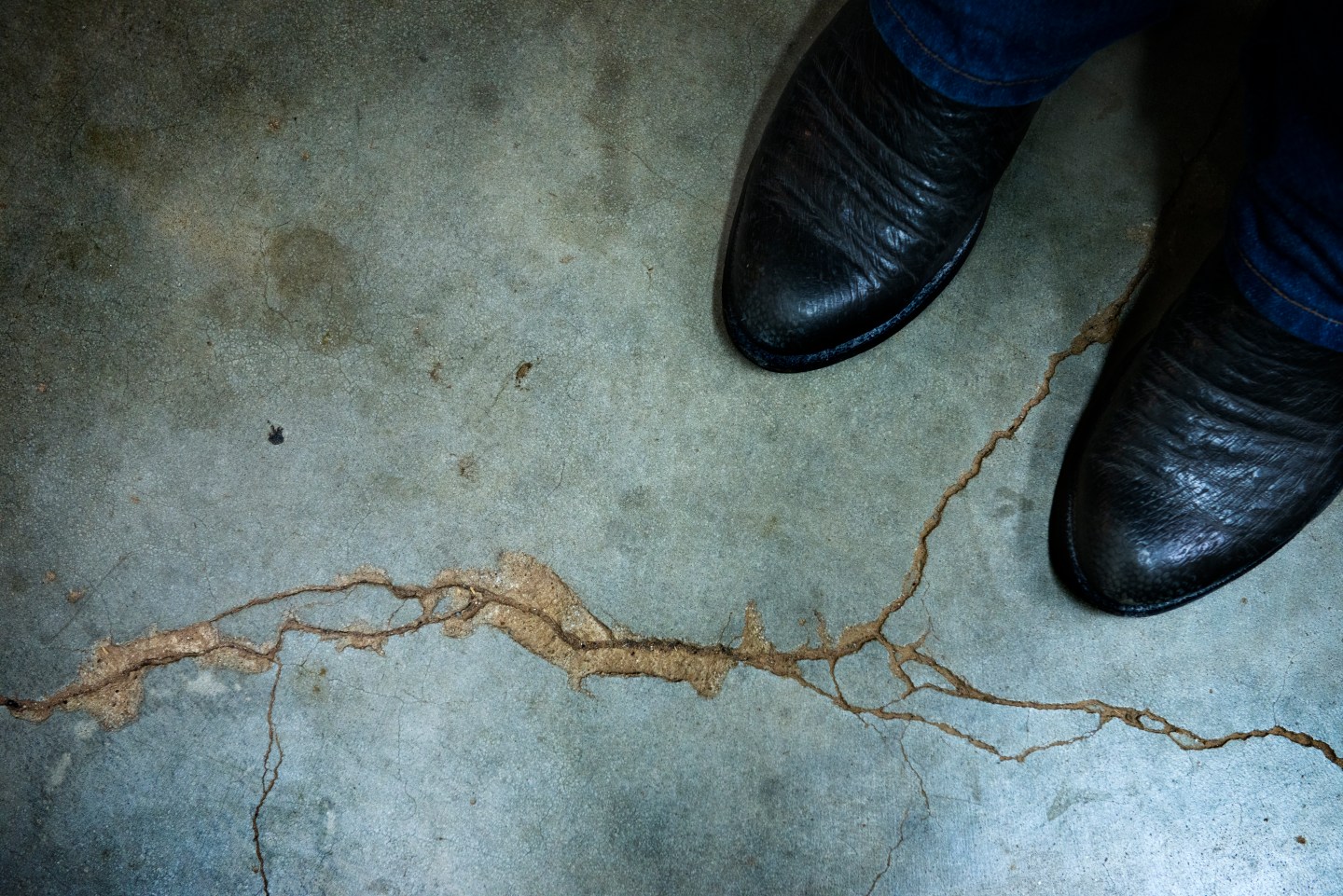 PRAGUE, OK - JANUARY 25: Gary Landra stands on a crack across his basement floor that he says was caused by an earthquake four years ago in Prague, OK on January 25, 2015. On November 5th, 2011 an intraplate earthquake measuring a record 5.7 occured near Prague. The quake caused a 28-foot tall stone fireplace inside the Landra's A-frame home to collapse and rain down on Sandra who was relaxing in the living room. She was taken to the emergency room and was badly bruised with 12 stitches. Oklahoma normally has seismic activity but the Landra's believe that wastewater injection wells used by oil companies are to blame for causing this quake and well as numerous others quakes throughout the state. Oil and gas companies use injection wells to dispose of waste water used in drilling and fracking. Recent scientific reports suggest that these injection wells may be linked to a dramatic uptick in Oklahoma earthquakes. Sandra Landra is seeking $75,000 in damages. (Photo by Linda Davidson / The Washington Post via Getty Images)
Photograph by Linda Davidson — The Washington Post/Getty Images

Oklahoma’s Supreme Court has ruled that a woman injured in a 2011 earthquake can sue the two energy companies that she accuses of causing the quake, The Wall Street Journal reports.

The ruling is further bad news for local energy companies, whose use of controversial hydro-fracturing or ‘fracking’ technologies has gone hand-in-hand with a surge in seismic activity over recent years. Scientific evidence increasingly suggests that the two are linked. To date, Oklahoma has lagged behind other states in allowing citizens to file such actions, a reflection of its importance to the state’s economy: the energy sector supports around one in five jobs, and has been responsible for two-thirds of the jobs created there since 2010, according to Oklahoma City University economist . Oklahoma produces 4% of the nation’s oil and 10% of its natural gas.

Sandra Ladra of Prague, Okla., is suing Tulsa-based New Dominion LLC and Cleveland-based Spess Oil, two privately-held energy companies, over injuries sustained when her stone chimney collapse after a quake that registered 5.6 on the Richter scale. The Oklahoma Supreme Court Tuesday overruled a decision by a lower court that had handed jurisdiction of the case to the state’s energy regulator, the Oklahoma Corporation Commission.

Ladra maintains the quake was caused by the injection of waste water into wells, an integral part of the fracking process.

The WSJ reported that Oklahoma experienced 585 quakes registering over 3.0 on the Richter scale in 2014, more than the total number of quakes in the previous 30 years.