The Tea Party is about to kill the Ex-Im Bank, but it won’t stay dead 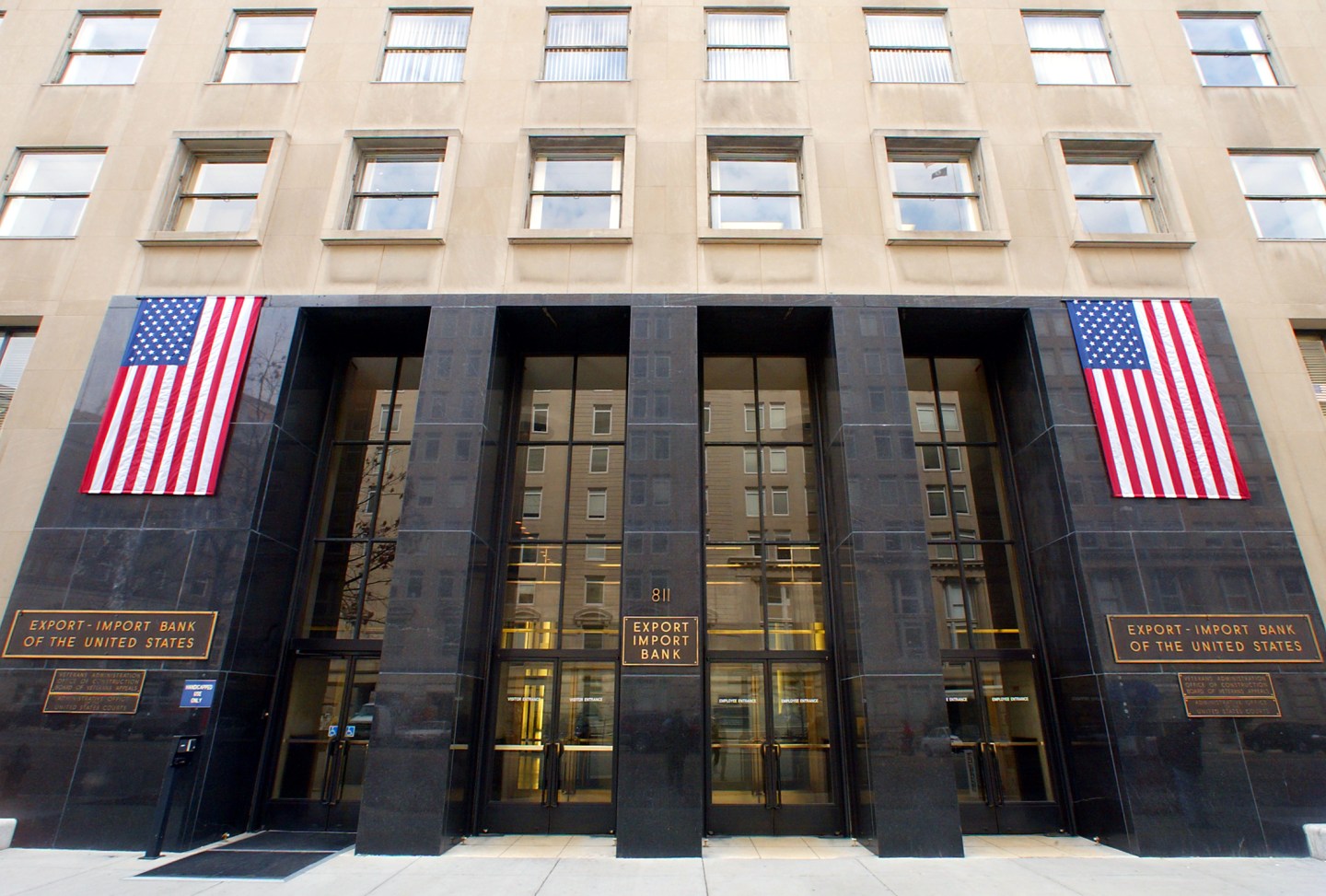 WASHINGTON, : A generic photo of the Washinton, DC, building that houses the Export-Import Bank, the Veterans Affairs Office of Construction, Board of Veterans Appeals, and the Administrative Office of the US Courts (Vermont and I Sts) 29 March 2002. AFP PHOTO/Paul J. RICHARDS (Photo credit should read PAUL J. RICHARDS/AFP/Getty Images)
Photograph by Paul J. Richards — AFP/Getty Images

After a half-decade of frustrations trying to shrink the federal government, Tea Party-affiliated Republicans are about to score their first victory. At midnight, the charter for the Export-Import Bank will expire, the result of a campaign by conservative lawmakers and affiliated outside groups to zero out the New Deal-era agency.

But there is growing indication on Capitol Hill that the Tea Party win will be short-lived. When Members of Congress return to Washington from their July 4th recess, leaders in both parties are looking to revive the bank’s charter, swiftly, by slipping a reauthorization into a bigger, must-pass bill funding highway projects.

The bank, commonly known as Ex-Im, exists to help promote American exports by guaranteeing loans to foreign buyers of U.S. goods. By the bank’s accounting, it supported $27.5 billion worth of exports in 2014, supporting 164,000 jobs — nothing to sneeze at, certainly, though the total represents only roughly 1 percent of all U.S. exports last year.

Free-market types in the GOP have seized on the agency as an example of the worst of what they call crony capitalism — a hotbed of corruption that uses tax dollars to subsidize multinationals (think: Boeing, Caterpillar, and General Electric) that should be able to finance their deals in the private market.

But those behind the campaign to kill the bank also acknowledge explicitly that it is merely a “test case” whose outcome alone isn’t going to remake government in some fundamental way. The agency employs fewer people than the Office of Surface Mining and guarantees a sum that amounts to a rounding error in the federal budget. “It just happens to be the tip of the sword, or the first skirmish or battle that will be coming our way,” House Financial Services Chairman Jeb Hensarling (R-Texas), the bank’s most powerful Congressional foe, told Fortune earlier this year. “To some extent, Ex-Im is going to be a Punxatawney Phil,” the Spring-predicting groundhog, he added, pointing to whether the more ideological wing of the party can carry some momentum into the debate over tax reform.

The likelihood that Tea Party Republicans will have to hand the Ex-Im scalp back nearly as soon as they took it means the victory, symbolic to begin with, will ring hollow. The expiration of the bank’s charter won’t cause it to shut its doors. Rather, Ex-Im will keep servicing loans it’s already made while ceasing to issue new ones (a stoppage, again, shaping up as temporary).

That Ex-Im could emerge as a flashpoint would have been tough to foresee until a few years ago. The agency for decades had operated in obscurity, with a bipartisan mandate to flog the bounty of the American industrial machine abroad. But in 2012, Delta began raising objections to the outfit, arguing it propped up the airline’s foreign competition with American taxpayer dollars by making it cheaper for them to buy new planes. Despite growing static among the ranks of the new rightwing on the Hill, then-House Majority Leader Eric Cantor (R-Va.) managed to secure an extension of the bank’s charter by striking an agreement with his Democratic counterpart, House Minority Whip Steny Hoyer (D-Md.). As it came back up for renewal last year, however, Republican free-market purists transformed Delta’s protest into their own cause célèbre. “The Bank of Boeing,” as they called it, needed to close up shop.

It might have remained an oddball gripe confined to the far right, until last June, when Cantor went down to a shock defeat in his own primary. His vanquisher: A small-town economics professor named Dave Brat who’d name-checked Cantor’s support for Ex-Im on the stump. The temperature within the House Republican conference appeared to change immediately. Hensarling described it as a “wake up call for a lot of interests in Washington that maybe a new day had dawned.” And indeed, the bank’s critics quickly attracted powerful new friends in the wake of Cantor’s loss. Appearing on Fox News Sunday two weeks later, Cantor’s successor, an affable Californian and theretofore Ex-Im supporter named Kevin McCarthy, declared that in fact the bank should be dismantled. Last fall, with Republicans anticipating major gains in the midterm elections, they punted on the bank’s fate as part of a broader budget deal, setting up the clash this summer.

In the meantime, reflecting the energy in the GOP’s base, all of the party’s presidential contenders — with the exception of Sen. Lindsey Graham (S.C.), who represents a major Boeing facility — have spoken out against the bank.

Yet for all that, the Tea Party faction doesn’t appear to have the momentum to sustain its impending midnight triumph. In a show vote earlier this month, 65 Senators lined up behind renewing Ex-Im’s charter, and Senate Majority Leader Mitch McConnell (R-Ky.) this week affirmed that the bank has the support it needs in his chamber. He has signaled it will hitch a ride on a transportation bill next month, and then it would need to survive an attempt by conservative House Republicans to strip it from that package. With near uniform Democratic support, only a fraction of the House GOP needs to get behind it to stave off the challenge. And backers can expect high-caliber cover from K Street. Coming off a major win in the trade fight, Ex-Im’s renewal now ranks as the top immediate-term priority for the corporate lobby. Unlike the trade fight, which pit big business against labor, unions are making common cause with the major exporters scrambling to save Ex-Im.