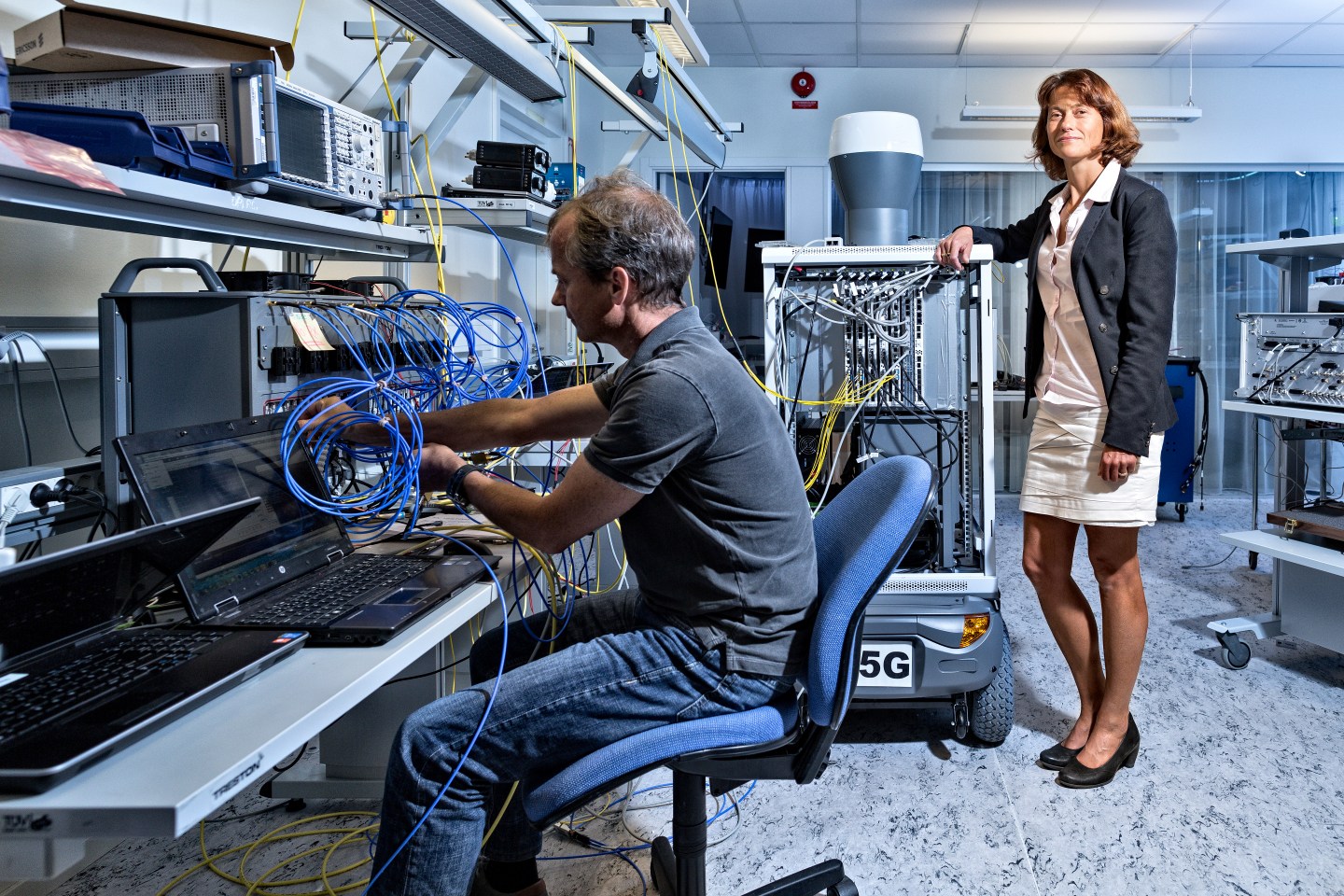 Telecom firm Ericsson is testing out a new 5G device on the streets of Stockholm, Sweden and Plano, Texas, that will revolutionize mobile technology.

The gadget is a far cry from the 4G smartphones we’re accustomed to carrying around in our pocket these days. In fact, the device is so big Ericsson is forced to transport it around in vans or specially made carts.

The reason Ericsson’s 5G prototype is so big in its current form is because it’s what’s known in the industry as a testbed, meaning it can be reconfigured to work as tablet, smartphone or PC, says Håkan Andersson, a tech researcher at Ericsson. Simply by loading a new program onto the device, the testbed can transmit data by emulating a weather sensor or act as a tablet capable of streaming and other video services.

And, in case you’re wondering what kind of speeds this 5G device supports, Ericsson routinely clocks 2 Gbps in its outdoor tests. That’s already ten times faster than the 200 Mbps theoretical speeds available on today’s most powerful 4G networks, and it’s really only the beginning.

Those peak speed numbers sound impressive, but in truth you’ll never see a 100 Gbps connection to your smartphone (and what exactly would do you with it if you could?). What those numbers represent, though, is a vast expansion of the overall capacity available for mobile use. The goal isn’t to give a single user on the network a ridiculously fast connection, but rather to deliver plentiful bandwidth to millions of devices simultaneously.

5G technology will also tap into new high-frequency spectrum known as the millimeter waves, which today are unusable for mobile communications. However, in the future the spectrum could open up thousands of megahertz of new frequencies for wireless broadband use, thereby adding tremendous amounts of bandwidth to mobile networks.

So much of the hype around 5G is about breaking the 1 Gbps barrier, says Andersson, but the more exciting problem is creating a consistently fast network with no dead zones, no congestion and no limitations on the number of devices it can support. “The question is how do we make a system that can connect a whole continent at 10 to 20 Mbps?” Andersson adds.

In fact, much of the work being done on 5G has little do with raw speed. For instance, researchers are trying to bring down the latency of the network—the delay users experience after clicking on a link and before a web page loads—cutting it down from 30 milliseconds today to less than a single a millisecond in the future. By reducing the network’s reaction time, researchers open the door for a whole new set of real-time applications. For instance, autonomous cars could communicate their intentions to other vehicles over the network instantaneously, allowing them to coordinate their speed and lane position or avoid potential accidents.

Another avenue of 5G research is actually focused on building much slower networks than what we use today. Instead of optimizing the network for speed, the mobile industry could optimize it for power efficiency and cost. The Internet of things could one day contain billions of devices—ranging from connected parking meters to seismic activity sensors—that would only relay the most minute amount of data intermittently. For those devices, the 5G network could create extremely low-bandwidth links that would cost very little to maintain, and consume so little power that devices could run on a single battery charge for years at a time.

“This is not only yet another system for mobile broadband,” says Sara Mazur, Ericsson’s head of research. “The 5G system is the system that will help create a networked society.”

5G could be all of these different technologies, or it could wind up being only one or two of them. The fact is 5G doesn’t yet have an official definition, and won’t for several years, while the mobile industry and global regulators settle on a standard. What Ericsson— along with other network builders, mobile researchers and academic institutions—has done is begun laying the technical groundwork for 5G technology though there’s no guarantee that Ericsson’s vision will be fully adopted.

It isn’t just a technology debate. It’s a political and economic one that could change the world. 5G is viewed by some as a way of bridging the digital divide between poor and rich countries or big cities and rural towns. Still others want 5G to become the glue connecting every conceivable device and application to the Internet.

You can’t blame the mobile industry for having lofty goals for its next generation of technology. It’s just a question of whether it can accomplish all of those goals with a single technology standard.