Why this winery is using a bunch of Tesla batteries 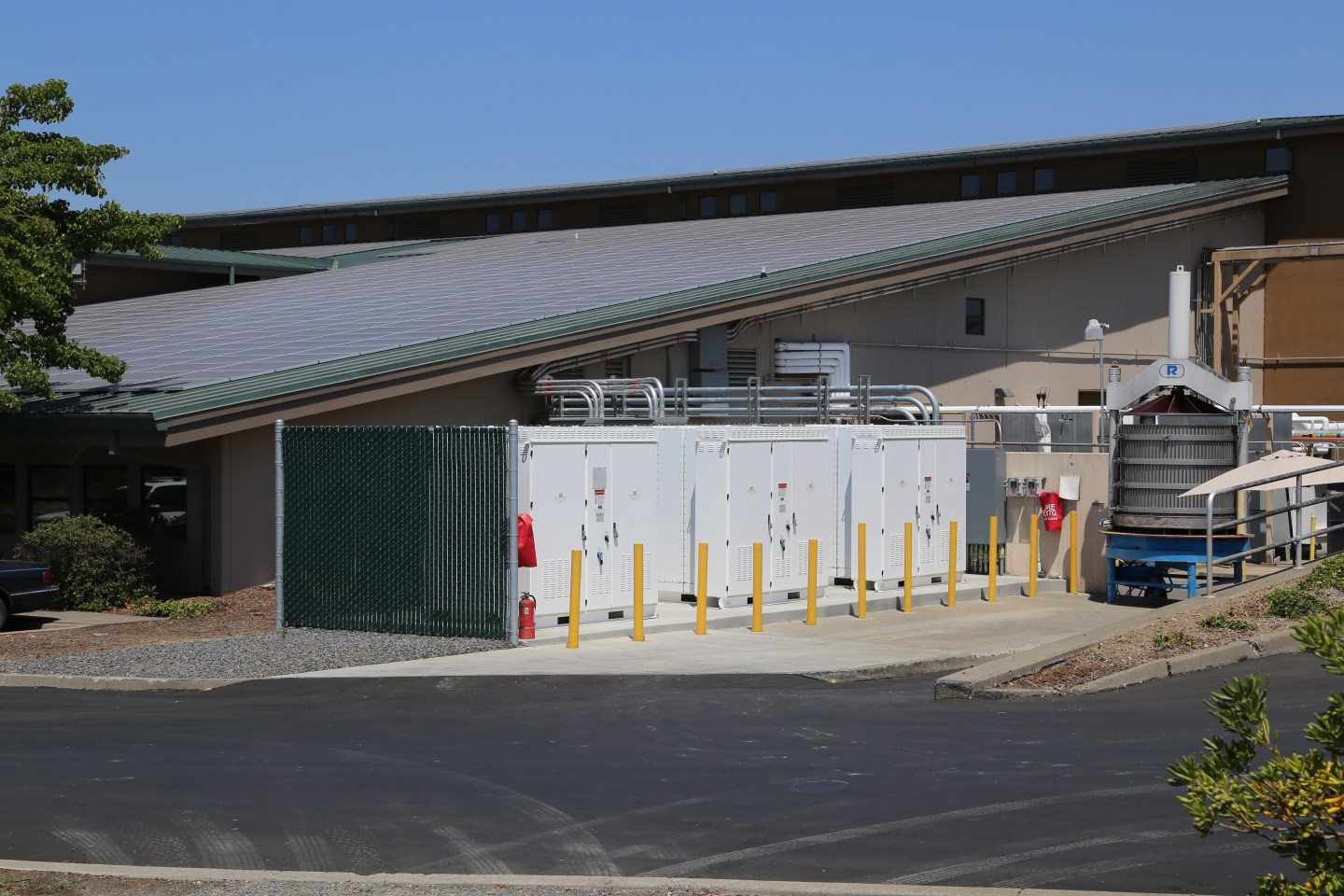 Behind the La Crema Winery, in the wine-growing region of Sonoma County north of San Francisco, sit three white refrigerator-sized boxes that are an example of how the wine making here has gone high-tech. At least the winery’s use of energy has. This winery is a pioneer for what a certain electric car company run by Elon Musk hopes will become the norm for many others around the world.

Inside the white metal boxes sit thousands of Tesla batteries. While Tesla is better known for making luxury electric cars, it recently started selling batteries to businesses, utilities and home owners to help them save electricity and store solar energy.

At the winery the batteries store energy from the sun generated by solar panels on the winery’s rooftop. Tesla’s algorithms are also shifting the winery onto battery energy when electricity rates from the power grid are high, helping the wine makers save money on their energy bill.

Tesla is banking on turning its nascent battery push into a huge new business — one day it could even eclipse the company’s car sales. To succeed, Tesla will need to attract businesses like the winery as customers and convince them that batteries can save them money, make solar panels more efficient, and make the owners look cool.

This Tesla battery installation is just one of six that the Jackson family, which owns Jackson Family Wines has installed at their wineries around Northern California including Kendall-Jackson, their most well-known brand. The group was an early pilot customer for Tesla and started working with the electric car maker two years ago.

The batteries started operating in January of this year, several months before Tesla made its big announcement about its new battery products. Tesla is only selling these types of batteries in limited supply right now and the company says its sold out until mid-2016.

Below the scorching summer sun and 90-degree weather, the Tesla batteries rapidly charge and discharge energy at La Crema Winery, in Windsor, Calif. several times a minute, based on Tesla’s software and the power needs of the winery. The boxes routinely emit a clicking noise, which is the sound of the inverters converting the electricity from the batteries into usable energy.

The batteries at the wineries are among Tesla’s largest battery installations to date, and its first for a winery. There are 21 Tesla battery boxes, with 4.2 megawatts or 8.4 megawatt hours, of storage capacity, scattered across the six wineries.

For a company that traditionally makes Pinot Noirs, not electrons, that’s a whole lot of batteries. The Tesla batteries at the La Crema Winery alone are enough to power 18 Model S cars.

There’s a handful of reasons why the Jackson family is using Tesla batteries at its wineries. On Thursday during a tour of the site, Julien Gervreau, Jackson Family Wine’s senior sustainability manager, explained to Fortune how the batteries work and how the winery has been trying to conserve energy and water.

At the wineries that have solar panels on the roofs, like the La Crema Winery does, the company can use the batteries to increase the solar generation at times when wine production is at its highest. Wineries use about half of their annual energy during the two and a half months of harvest from August to late October, when grapes are being processed and put into tanks. The rest of the year, most of the wineries’ energy goes to refrigeration.

Across the Jackson family wineries, solar panels and Tesla batteries are expected to lower the company’s electricity bill by nearly 40% in 2016, which is a savings of about $2 million. But Gervreau also says the family is willing to invest in some energy and water savings technologies that don’t have a quick payback.

One of the reasons Tesla’s grid batteries have gotten so much attention — aside from the company’s high-profile CEO —is that they’re some of the lowest cost lithium ion batteries available for these purposes. Tesla (TSLA) is selling a small version of the batteries, called the Powerwall, to installers for small businesses and home owners for $3,500 for a 10 kilowatt hour battery and $3,000 for 7 kilowatt hour battery. A larger version called the Powerpack, which is what the winery is using, will likely have comparable or lower per battery prices.

The Jackson family spent about $10 million installing a collective 6.5 megawatts of solar panels across their wineries, with a goal to get half of their electricity from clean energy. The company is at about 30 to 40% clean power currently. Gervreau says the pay back time on their panels is about six years, and called it “an easy decision” for the company.

When harvest season is over, or if a winery doesn’t have solar panels, the Tesla batteries switch into what’s called “peak shaving” mode. When the power grid is being heavily used in the county, like on a hot summer afternoon, and electricity rates are high, the winery switches to battery power to avoid the expensive grid electricity. In that way the winery can lower its energy bill by close to 10%.

Tesla’s sophisticated algorithms are constantly “shaving” away at the grid energy use during these peak times. That’s why during the tour, the batteries were rapidly charging and discharging several times a minute. Later that afternoon the winery would cut much of its grid-based energy through an agreement with the local utility to curb energy use during peak grid times.

Tesla’s algorithms use data like historical temperatures, energy use, time of day, electricity rates, and many other factors. Over time, Tesla’s algorithms learn what the winery’s power needs are and figures out the best way to use the storage to save energy and money.

The wine making industry is both energy and water intensive. Sustainability is a core need for many wine makers, partly because it makes good business sense.

Jackson Family Wines was founded in the early 1980’s by former San Francisco attorney Jess Jackson, and the Jackson family still runs much of the business. They have adopted a number of techniques to reduce both their energy and water use, beyond just the Tesla batteries.

Inside the cellar at La Crema, the winery refrigerates and houses 8,000-gallon tanks that are filled with wine during certain months. A lot of water and energy goes to cleaning those so that they are ready for the next season.

The company is using various energy and water efficient systems to clean them. One made by Aurratech mixes water with peracetic acid to create micro fog bubbles that can sanitize the tanks using less water and energy. It’s like a fog machine for the inside of the wine tanks.

Another sanitizer made by BlueMorph uses only ultraviolet light to clean the tanks. The winery plans to install a computerized system to monitor and manage the tanks as well as the heating and cooling systems in the cellar. Wherever the winery can eek out energy and water savings they try to and they’re willing to experiment on new technologies.

Outside of the cellar, and to the right of the Tesla batteries, there’s an ultra efficient natural gas water heater. Next to that the company plans to install a forward osmosis water treatment system which cleans water by pushing it through membranes under high pressure. A hundred feet away there’s a wine bladder press that discharges the leftover grape goop from wine making, which is fed to cows in the area.

But not everything is so high-tech. In the cellar, the Jackson execs point to a broom and a squeegee. Bang for buck that might be the cheapest and fastest way to save water.