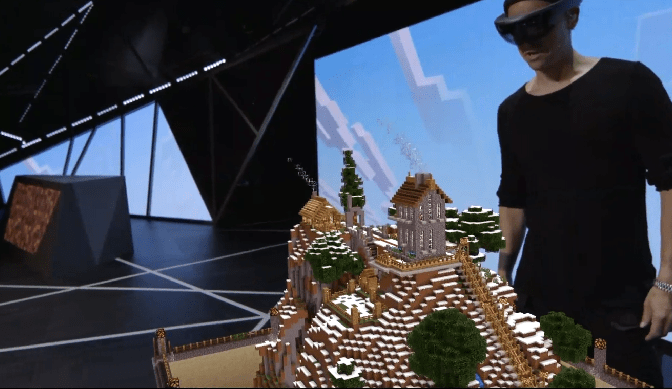 Microsoft is hedging its bets across both the augmented reality and virtual reality industries. At E3 2015, Microsoft (MSFT) announced partnerships with Oculus VR and Valve for Steam VR, as well as showcasing its own AR device, the HoloLens.

Microsoft hosted three HoloLens demos on the show floor: Halo 5: Guardians, Project X-Ray, and Minecraft. Mike Nichols, corporate vice president and chief marketing officer at Xbox, says the Halo 5 HoloLens demo was designed exclusively for E3 as a way to demonstrate what HoloLens can open up to game developers. But the Minecraft HoloLens demo is being developed for gamers.

After debuting at the Xbox E3 press conference and then being playable behind closed doors, the MineCraft HoloLens demo stood out at the crowded show. Players can choose to experience the game on any wall, or have a full 3D holograph emerge from any table. Voice and hand controls make navigation and play intuitive. There’s even multiplayer support for a player without a HoloLens.

“HoloLens is the first untethered holographic computer and it’s going to be useful for a number of different scenarios,” Nichols says. “When we introduced it in January, we talked about how it can be used to design different products, how you can an immersive experience of walking around on another planet, and the like. Now we’re showing you what Minecraft would look like if you have the perspective of depth and that game is part of your environment. It’s one of the ways that we can see gaming evolving over time.”

Tim Merel, analyst at Digi-Capital, forecasts that the AR business will explode to $120 billion by 2020, while VR will reach $30 billion in that time.

“[Microsoft CEO] Satya Nadella has said that HoloLens was a significant factor in Microsoft buying Minecraft, and the massive Minecraft community could embrace HoloLens with a passion,” Merel says. “However, we do not anticipate games as the primary driver for HoloLens, or AR more broadly. AR and HoloLens adoption could be driven by a broader set of use cases than VR headsets, including TV/film, enterprise, advertising, and consumer apps from Facebook to Uber to Clash of Clans.”

Michael Pachter, analyst at Wedbush Securities, thinks the HoloLens won’t launch until fall 2017, and estimates that the price will be $500 out of the gate.

“I think HoloLens will dominate the augmented reality space because buying an AR device is much easier for most consumer than buying a VR headset,” Pachter says. “It seems that holograms can be built into a lot of games, and the Minecraft demo made me realize how fun it would be to play Total War or Starcraft with AR.”

Nichols believes Windows 10 will be a great platform for both VR and AR. And while Microsoft hasn’t officially announced anything in the mobile market, there’s opportunity there for AR as well.

“When you think of all these different places where an asset like Minecraft can be really valuable to people, quite a few people play it on the phone,” Nichols says. “You could imagine that augmented reality could benefit from a well-designed game in that space, where you could look at it from different perspectives.”

With the HoloLens and its new VR partnerships, Microsoft now has gaming covered across all angles.