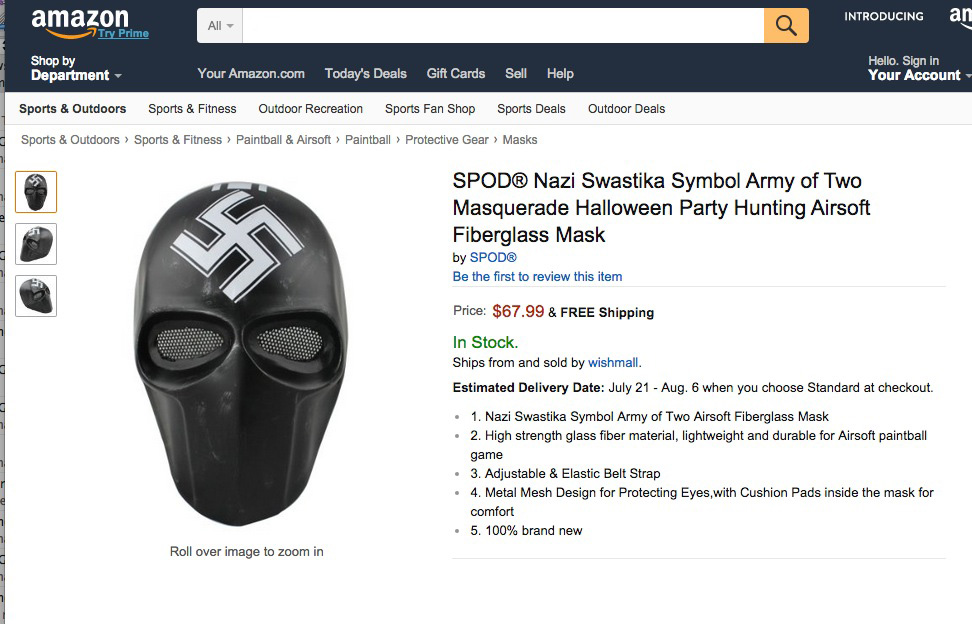 In the wake of the murder of nine churchgoers in Charleston, South Carolina, Confederate flags have become the fabric equivalent of persona non grata to many retailers. On Monday, such big names as Walmart, Amazon, K-Mart, and Sears said they would no longer sell merchandise with the emblem.

Last year Amazon and Sears got bad press when they were found to be selling swastika rings. But a search by Fortune on Wednesday found plenty of swastika- or Nazi-themed items for sale on the web sites of Amazon, Sears and eBay.

For example, as of Thursday 8 a.m., reproduction German officer hats were still available from third-party sellers on Amazon. So were tin memorabilia boxes with swastikas on them and swastika cases for an iPhone 5 or 5s.

Amazon did not respond to a request for an interview. Sears said in a statement, “We regularly review our processes to ensure compliance by our vendors, and we encourage our customers and community to help us flag any items they believe might violate our guidelines.” A spokesperson for eBay said that the company will allow materials with a Nazi reference or swastika if they are historical in nature but not “those that amount to Nazi propaganda or are disrespectful to victims.”

“You’re dealing with a whack-a-mole problem, particularly with third-party sellers,” Steven Freeman, director of legal affairs at the Anti-Defamation League, told Fortune. “You have a problem where [a third party] can put something up for sale. Unless someone on the site flags it for them, it doesn’t necessarily come down. It’s a challenge for us; it’s a challenge for the company; it’s a challenge for [consumers].”

Indeed, a number of Nazi-related items that Fortune found on Amazon and Sears Tuesday were unavailable Wednesday evening after Fortune reached out to the companies.

Third parties regularly post items that are calculated to appeal to racist ideals. There are books promoting a white-power agenda and even genres of music that promote racial hate, including song titles like “Fire Up the Ovens.” Sometimes the sellers provide a description that might unintentionally (or intentionally) provide cover. For example, a third party seller called Fashion Plaza had an item called a “men’s stainless steel vintage medieval engraved ring” that showed a swastika and came up on a search for that word, even though it was not used in the description. An Amazon customer who reviews products under the name Robert Lee Watkins wrote, “Calling all skins! For only a penny this is perfect for representing your racial love.”

“The sale of racist material across the Internet is ubiquitous,” Ryan Lenz, online editor for the Southern Poverty Law Center, told Fortune. He noted that the issue of the Confederate flag being sold only became incendiary after the Charleston event. “The idea of finding racist materials online through mainstream retailers is not new. It’s probably not going to go away for a little while.”

Freeman of the ADL said the organization doesn’t request that literature be removed. But selling Nazi- and other racist-themed items is an entirely different matter. “We’re talking about people making money off the symbols. They belong in a museum,” said Freeman, who was sympathetic to the difficulty online marketplaces face in policing these items. “They shouldn’t be sold on eBay or Amazon.”

Lenz, however, takes a stronger stance. “It behooves companies that exist online to really think about their terms of service — what they allow their service to be used for,” Lenz said. “The reality is that these places [are] marketplaces where the radical right goes to hawk their wares. To stress the point, if Amazon, eBay, and others want to be known as the marketplace for racists, that’s up to them.”