This startup is looking to revolutionize lithium ion batteries 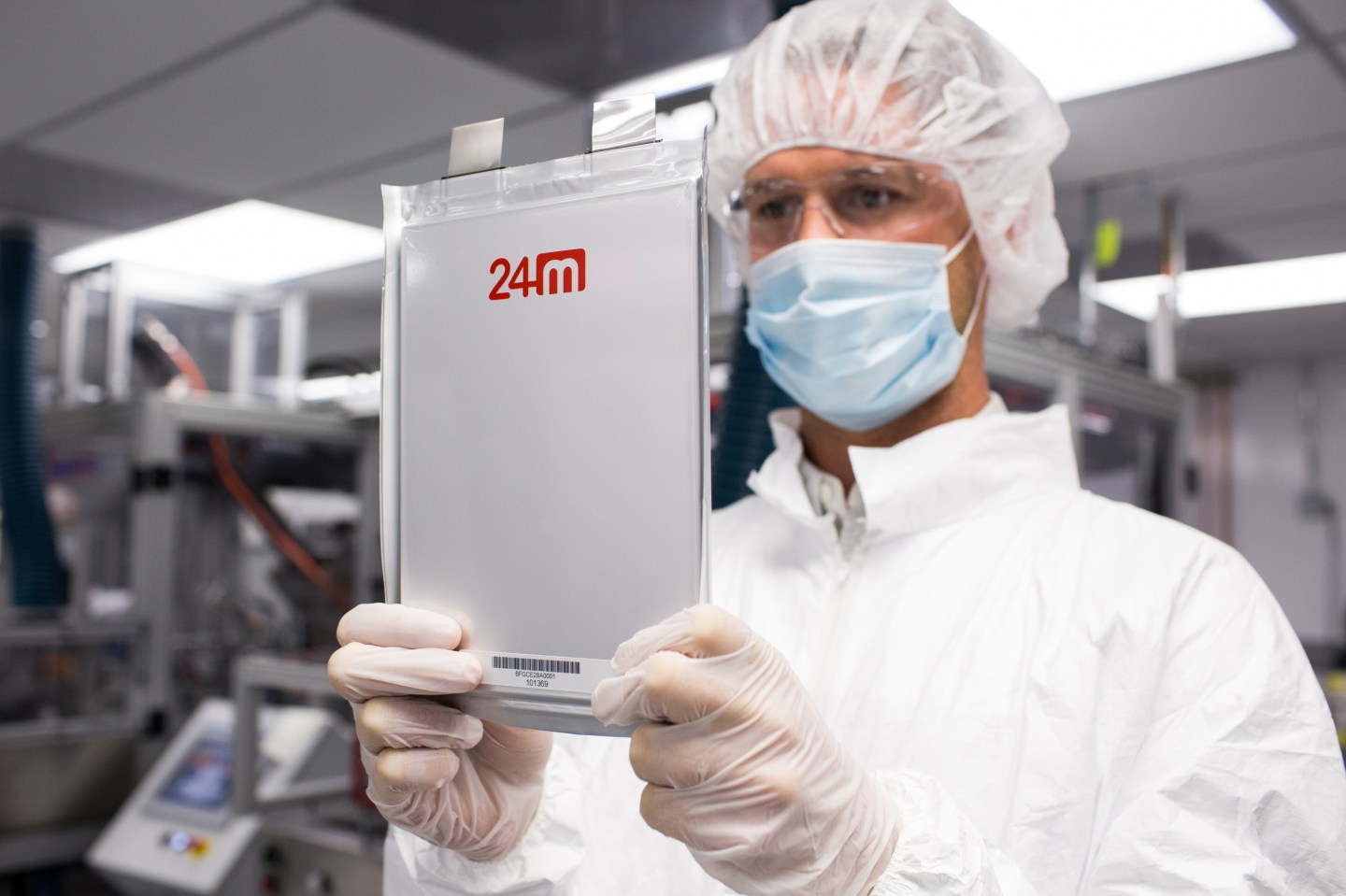 All eyes have been on Tesla’s planned massive battery factory, under construction just outside of Reno. But on the other side of the country, in Cambridge, Mass., you’ll find an undercover startup that’s been toiling away at a totally different way to design and make what company executives say is a better battery for the power grid and electric cars.

The company, 24M, which came out of stealth mode on Monday, is working on a new type of lithium ion battery that it says is vastly cheaper than what’s currently on the market. The company describes their innovation as “the most significant advancement in lithium-ion technology in more than two decades,” and if the battery can deliver on its promise it could help deliver low cost batteries for important new emerging markets.

Over the years there have been dozens of young startups that have tried to disrupt the battery industry with new ideas. But few actually pull it off. 24M will face intense competition in a crowded market that favors large companies like the battery giants Panasonic and LG in Asia.

MIT battery scientist Yet-Ming Chiang founded 24M in 2010 by spinning it out of his previous battery company A123 Systems. The idea was to create a battery that could store more energy while shrinking the other materials in the battery the he believed could be made smaller.

Chiang wondered if there was a way to significantly grow the electrode, which is the heart of the battery and used for charging and discharging. Meanwhile, he wanted to make parts smaller like the separators between the electrodes, which keep the anode and cathode segregated, or the currency collector, which receives electrons from the external battery circuit.

Now five years later, Chiang and his team of 50 people, say they’ve found a way to ditch more than 80% of the non-energy storing materials, and increase the size of the electrode by over five times compared to a traditional lithium ion battery. If a cross section of a standard lithium ion battery looks like a very complex seven layer cake, a cross section of a 24M battery looks like a two layer cake with a hefty anode and cathode.

Chiang tells Fortune that if the company can show that its process is superior to the standard, he would expect that everyone would want to use it to make lithium ion batteries. “For me, the ultimate win would be if this would become the defacto standard for battery production around the world,” said Chiang.

The way 24M makes the semi-solid electrode is part of the company’s secret sauce, so it’s a little unclear just exactly how it does it. But Chiang says the team uses “pretty interesting nanotechnology,” to engineer how the batteries conduct electricity.

Traditional lithium ion battery manufacturing largely uses roll-to-roll processing, which takes a thin wet coating of the electrode material, applies it to a thin metal foil and then dries the electrodes in big drying ovens. When the thin electrodes are finally dry and hardened, they are snapped together to make a cell and the liquid electrolyte is added.

Chiang says most battery factories churn out batteries this way because it was the dominant technology adopted from magnetic tape factories in Japan in the 1980’s and 1990’s. That industry has tanked as data storage technology has evolved, but the processes are still deeply embedded in lithium ion battery production.

The problem with this method, according to Chiang, is that it’s complex, it takes a long time, and there’s limited ways to scale up the process other than to just make the battery manufacturing line longer. This requires a lot of money upfront to build a huge factory.

24M’s factory designs remove the big dryers, vastly reduces the number of steps, and enables a factory to be made in a more modular way, requiring less upfront investment. The company says its battery cells can be made in one-fifth of the time of a conventional battery.

A few blocks south of Massachusetts Avenue in Cambridge, 24M has a 32,000 square foot pilot facility where it’s churned out about 9,000 early batteries in this new way. The company is already shipping these sample batteries to partners and potential customers. The batteries could be installed in test applications in the field as early as 2016. 24M wants to build a larger production plant in 2017.

With its simpler manufacturing, 24M’s batteries are supposed to be much less expensive than standard lithium ion batteries. By 2020, the company says its battery costs will be less than $100 per kilowatt-hour. Some of the most low cost lithium ion batteries coming out of rival factories today are closer to $200 and $250 per kilowatt-hour. Tesla is looking to lower the cost of its batteries, from these already low levels, by a third through both massive scale and improvements in chemistry.

Chiang, and 24M’s CEO, serial tech entrepreneur Throop Wilder, are eager to describe 24M’s technology as “a platform” that could disrupt the current lithium ion battery industry. The idea is that any company could use this design and manufacturing plan to make any type of battery using mostly off-the-shelf parts, equipment and materials, just combined in a new way.

But the 24M executives aren’t interested in licensing out their tech to start. They want to make batteries.

The sample batteries, and the first of their batteries to market, will likely be used on the grid by utilities and at commercial buildings. There’s a growing market for utilities and building owners to buy energy from battery farms during peak grid times or paired with new solar and wind farms. After grid batteries, 24M could sell batteries for electric vehicles, too.

That venture capitalists were willing to back an early stage battery technology is unusual in this day and age. Many venture capitalists got burned by investing in young, manufacturing-focused energy tech years ago, and the battery industry has been littered with new startups that have tried to build large battery factories and stumbled.

Chiang knows this side of the industry all too well. A123 System, his previous company, started raising money from VCs a decade ago. It went public with one of the largest IPOs of 2009, making its early investors a profit. But as A123 Systems built up its production, and the market for electric vehicles grew more slowly than anticipated, the company struggled and eventually filed for bankruptcy. In 2013 Chinese giant Wanxiang Group bought most of the assets, while other companies bought various divisions.

Chiang, who’s still an advisor to A123 Systems, says A123 was “ahead of its time,” and points out that the company is now in a good place, doubling its current manufacturing. But the ups and downs of the founder’s former company highlight just how difficult the battery market is for a startup that’s looking to do something brand new.