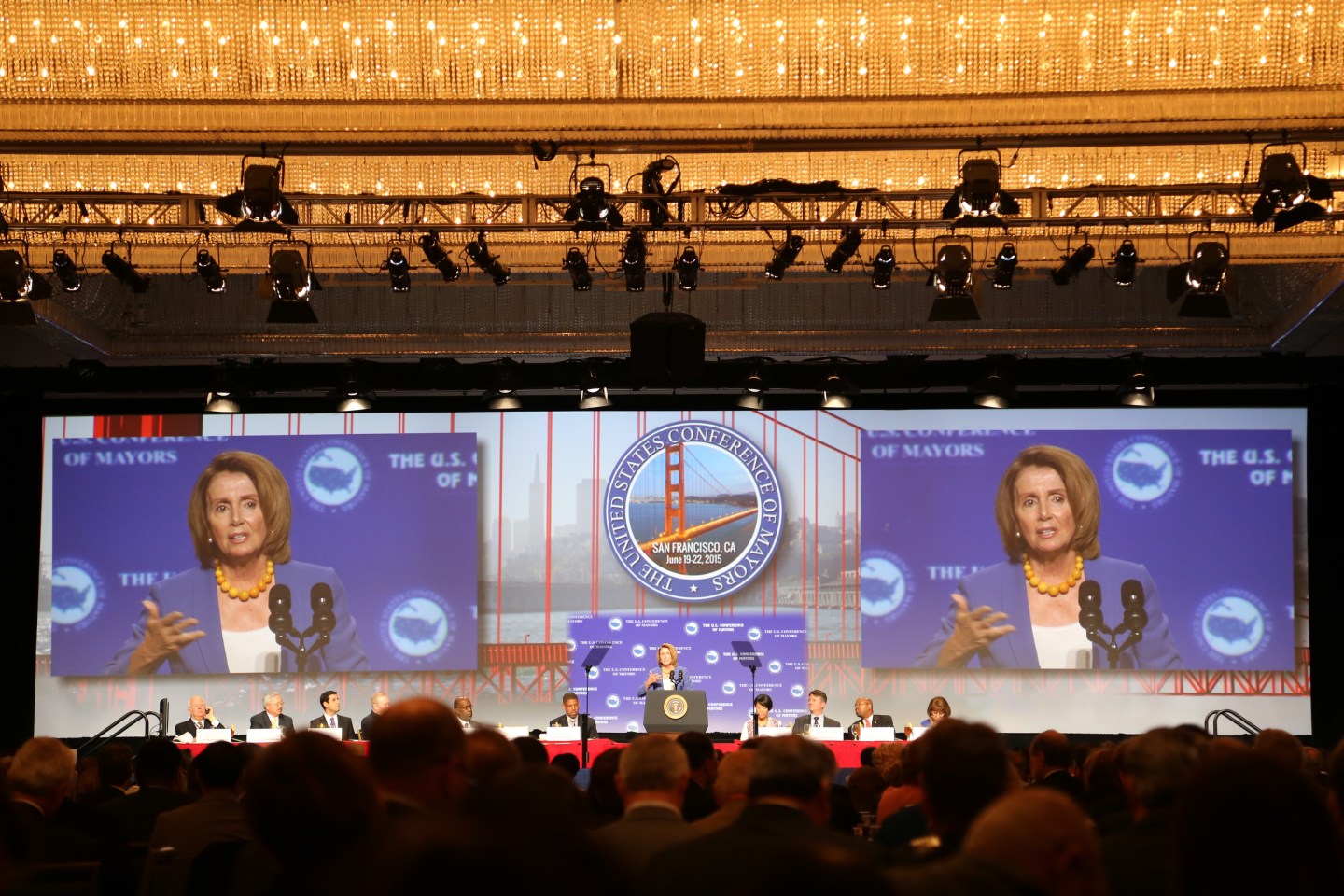 House Minority Leader Nancy Pelosi says the lack of broadband in many U.S. communities has created a gap in digital learning for American children that is “immoral” and “has an obscenity about it.” Her solution: Building more broadband infrastructure.

“There’s a homework gap — these kids go home and they don’t have that technology,” Pelosi said at the 83rd annual U.S. Mayors Conference in San Francisco. “But they should and they can and we’ll make it happen. Only 37% of our nation’s schools had enough broadband for digital learning, placing 40 million kids on the wrong side of the digital divide.”

Pelosi, a Democrat from San Francisco, got into the weeds a bit about just how this broadband should be delivered to residents in under served communities. Cities need to be “in the lead,” rather than the states when it comes to accessing wireless spectrum for mobile broadband. She was likely referring to how in some regions state laws have restricted city governments from expanding their broadband services and competing with commercial Internet service providers.

Pelosi complained about powerful interests — presumably big telecom companies — that are trying to dominate the discussion about how cities and towns access spectrum. To rebuff them, she asked the audience of mayors to “please join together to say that this [access to broadband spectrum] has to happen at the municipal level and not the state level.”

The solution, Pelosi said, is more investment in infrastructure so that Americans can compete in the 21st century. In addition to broadband infrastructure, she said the U.S. needs more physical infrastructure like bridges and water systems. “We have a tremendous deficit of infrastructure,” she said.

President Obama, who took the stage shortly after Pelosi, echoed her concerns over a lack of physical infrastructure in the U.S., and said we will keep “paying the costs of patching over infrastructure.” He called for more federal help with the funding, and noted that big infrastructure projects create tens of thousands of jobs.

Acknowledging that he was partly preaching to the choir, Obama said there wasn’t a mayor in the room who doesn’t have a long list of city infrastructure projects on a to-do list. But he asked for their support to boost infrastructure spending, saying “we need to convince Congress to get this done.”

In addition to basic infrastructure needs, Obama pointed out how his administration has helped encourage new solar energy infrastructure. “We’re producing 10 times as much solar now as when I came into office,” said Obama.

Of course, increased spending on infrastructure projects would likely be a tough-sell to the Republican-controlled Congress because of concerns about the cost. With only a year and a half left in his term, time is running out.