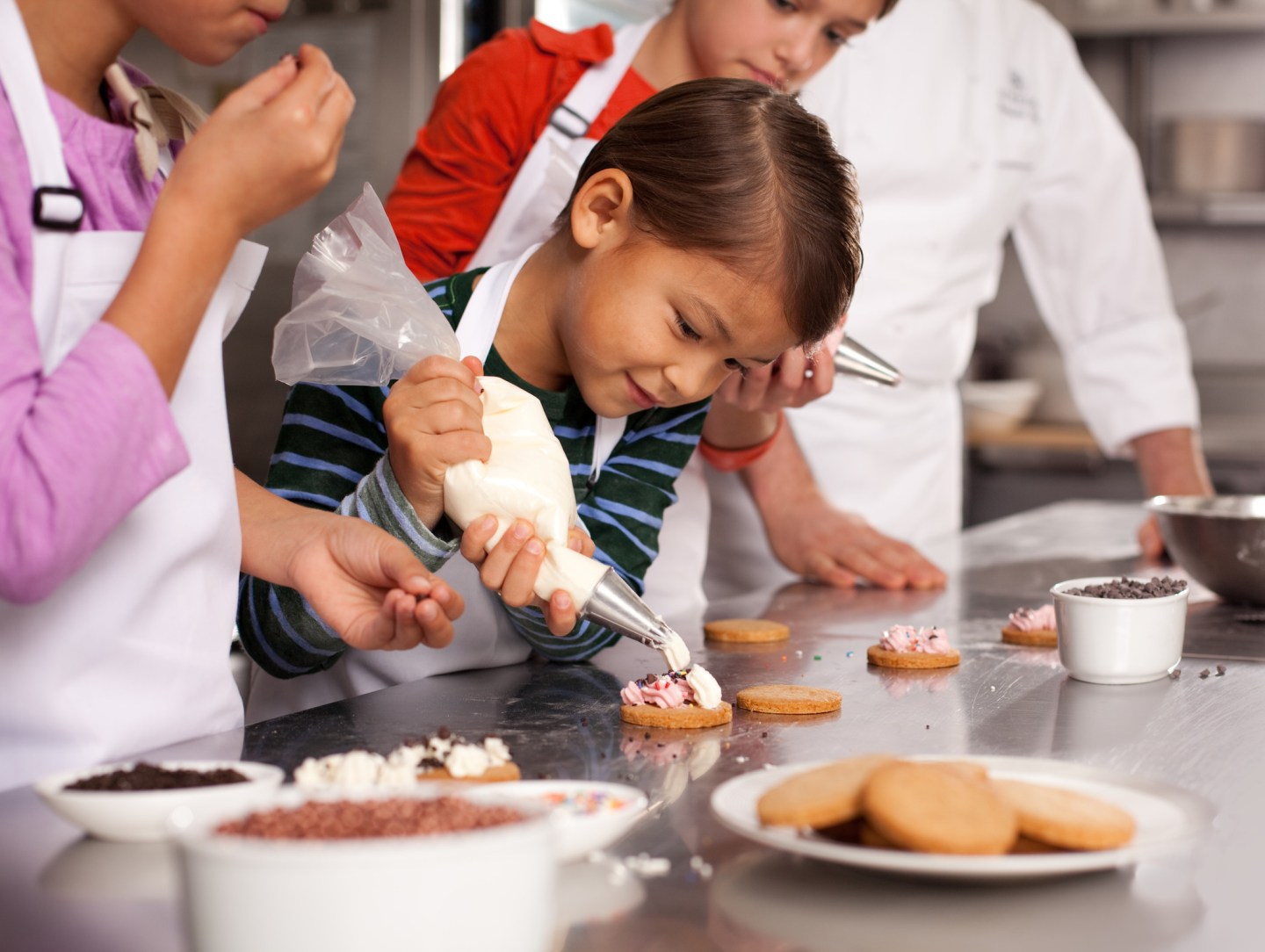 Amenities for kids at upscale hotels used to be relegated to cookies and milk at turndown, uninspired children’s menus and maybe a coloring book or two.

Thankfully, young globetrotters today have much more to look forward to: luxury chains are now plying on them with perks like cooking classes with famous chefs, bird-watching expeditions, and other not so run-of the-mill-activities and creative gifts beyond the standard stuffed teddy bears.

All this pampering even as fewer travelers are toting kids on their trips. According to data from the U.S. Travel Association, the national non-profit organization for the country’s travel industry, 23.4% of leisure trips in 2014 included children under the age of 18 compared to 30.7% in 2008. The decline is because younger adults are getting married later and aren’t having as many children.

But while the overall numbers may be down, Albert Herrera, the Senior Vice President of Global Product Partnerships for the luxury travel network Virtuoso, says that deep-pocketed parents are bringing their offspring on the road with them more than ever before, and posh properties are putting oomph in keeping this picky clientele entertained.

“High-end hotels are going out of their way to accommodate children and their parents by offering clever and meaningful amenities because they realize that these families are a lucrative segment of the travel market,” he said.

Here’s what five brands are doing to please the junior crowd, and though some charge for a few offerings, all have plenty of freebies.

Kids staying at any of the 34 worldwide properties of the brand owned by the Stamford, Conn.-based Starwood Hotels & Resorts are spoiled for free with child-sized robes and slippers, a different treat at turndown every night such as cake pops and gifts throughout their visit like coloring books, Frisbees and bubbles. Parents with babies, meanwhile, can borrow strollers and raid the stock of diapers and wipes.

The best perk, however, is the new Family Traditions program which is a collection of creative experiences inspired by the destination. The St. Regis New York, for example, has two options like a kid-friendly tour of the city’s museums complete with a scavenger hunt and a four-hour trip to Central Park with a picnic prepared by the hotel’s chef.

Some locations also have elaborate kid’s clubs like at The Iguana Children’s Club at The St. Regis Bahia Beach Resort in Puerto Rico where children between the ages of five and 12 can go bird-watching, kayaking and turtle feeding. Fees vary for Family Traditions by property.

Children under five staying at any of the 95 properties of the Toronto-based brand get to eat for free at the on-site restaurants while parents can borrow the latest top-of-the-line strollers to tote them around for no charge.

But that’s just the beginning: close to 30 locations offer Kids for All Seasons, a complimentary program for those between the ages of 5 and 12 and unique in each destination. In Orlando, for example, Saturday is dive-in movie night where family-friendly hits- usually by Disney- play on a 180-inch screen next to the massive family pool, and kids nosh on popcorn and candy while they watch from the water or on one of the chaise lounges around it. The Chicago location has pizza making classes, Scottsdale hosts ice-cream socials, and Boston leads bikes tours along the Charles River. Many hotels also have teen centers stocked with video games and movies.

It might an Asian sensibility, but all ten of the Hong Kong–based Peninsula Hotels enjoy doting on kids. They are greeted with their own toiletry kit, a gift or snack such as just-baked cookies or a puzzle and a robe and slippers. Also, each property has its own set of activities for no charge like scavenger hunts around the hotels in Beverly Hills and New York and a meet-and-greet with the Peter Bear mascot in Chicago who shows up to kids’ rooms in full costume and with a wagon full of treats.

For an additional cost, the junior set can enroll in the several Kids Academy options offered at every destination: in Chicago, for example, girls between the ages of two and 13 can be play princess for a day where a staff of “attendants” does their hair, nails and makeup, outfits them for a gown and teaches them to curtsey before a pumpkin-shaped horse drawn carriage whisks them away for a shopping spree to a nearby store. A more gender neutral pick is the kite workshop in Beijing where kids learn how to make one from a local kite artist using materials such as bamboo, silk and paper. Fees for Kids Academy vary by location.

Though the brand, which started in Singapore and is now part of the Toronto-based FRHI Hotels & Resorts, doesn’t have an official kid’s program, each of the 12 properties has their own set of complimentary amenities for young guests. The options at the Le Royal Monceau- Raffles Paris include family-friendly movies in its theater, a pizza making class with a Michelin-starred Italian chef, Bonpoint toiletries, sweets from the re-known pastry chef Pierre Herme such as toffee popcorn and mini macaroons and a rotating selection of art workshops- the current one is inspired by the new "Tattooist, tattooed" exhibit at the Quai Branly Museum. Some of the locations also have kid’s clubs like the Sugar Palm Club at The Raffles Praslin Seychelles which caters to toddlers and young children with activities such as kite making, shell collecting, Creole fishing and painting.

A sense of place is key to the complimentary children’s programs at this chain of 18 properties based in Los Angeles. All young guests get little backpacks, bath toiletries, slippers, robes, and puzzles, but anything beyond these basics is inspired by the destination. The stuffed animals, for example, are different at each location- kids at The Carlyle in New York City receive Carl and Carly teddy bears while those at Rosewood Mayakoba in Mexico get stuffed crocodiles.

Welcome amenities and activities also vary: the most popular one at Jumby Bay in Antigua is “Spike Your Bike” where kids are greeted with a basket of accessories and a blank license plate so they can personalize a bike for their visit. Also a hit is the tuck-in from guest relations manager and local author Melinda Fletcher who surprises children with bedtime stories by showing up to their rooms with cookies, milk and her book “The Dancing Pyjamas.”

And, at the Mayakoba property in Riviera Maya, one of the most fun options is the scavenger hunt which takes kids all over the resort including on a boat ride with the on-site biologist exploring the 61 acres of lagoon and 210 acres of mangroves. The excursion ends with Mexican hot cocoa and cookies and Mayan story tales.