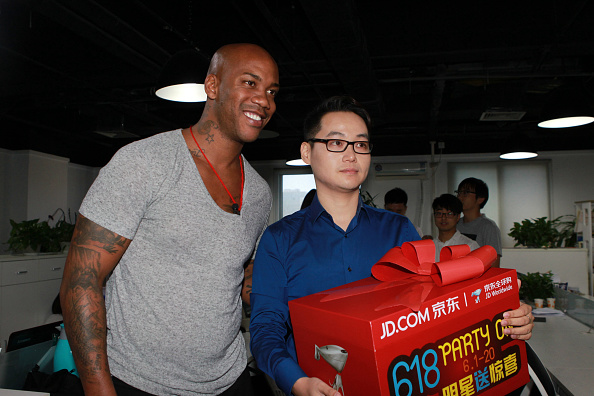 It’s becoming clearer by the day that China is beating the U.S. in the one aspect of e-commerce that basically sets the tone for the whole experience: fast delivery.

“The U.S. is a tremendous innovator, but in e-commerce it’s really racing to catch up,” Haoyu Shen, CEO of JD Mall, said in an email a day before JD.com (JD) released figures from its June 18 anniversary sale—JD’s answer to the attention Alibaba gets for its November Singles’ Day sale—during which it processed 15 million orders, a 100% increase from the previous year. “In the U.S. people can’t believe that we offer same-day delivery—free—for orders made before 11 a.m. in basically every major Chinese city,” Shen explained. (Free comes with a minimum order of $13.)

Same-day delivery isn’t novel in China anymore. Alibaba’s logistics arm that partners with couriers ships to 34 cities for next-day delivery and said this year it expects that number to hit 50. But JD.com, Alibaba’s (BABA) rival and the closest equivalent China has to Amazon.com (AMZN), with dozens of warehouses scattered around the country and a direct sales model that wards off fake goods, started same-day delivery five years ago and last year counted 43 cities. It says it has expanded since.

A direct comparison of China’s same-day credentials to U.S. companies’ is a little unfair. Alibaba, Jd.com, and others enjoy the advantage of cheap labor that is the backbone of China’s advantage. By one estimate there are 35,000 delivery companies fighting for packages, cutting profit margins to almost zero but making deliveries to far flung-places in China’s interior, otherwise uneconomical, suddenly appealing if only for a few pennies in profit.

But that’s not the whole story.

JD, for one, doesn’t benefit from those 35,000 delivery competitors because it has spent hundreds of millions to build up its own delivery network which last counted 48,000 workers, 140 warehouses, and 3,500 delivery and pickup stations.

That doesn’t come cheap, even in a country with cheap labor. Expenses related to delivery increased 97% in the first quarter to $400 million, driven by JD’s expansion into smaller cities and building out its so-called “last mile” delivery business for third parties.

Alibaba’s logistics affiliate, by contrast, works with couriers, which saves the company money but gives it much less control over the delivery process, making Alibaba more vulnerable to fraud.

In the past four quarters, JD has posted losses of $115 million, $73 million, $27 million, and $94 million. The delivery build-out isn’t directly responsible, but it could become a big drag on the bottom line in the future, even if JD has the money from its May 2014 IPO which raised $1.8 billion.

The company declined to say in its latest outlook when it would make a profit, but a forecast of another quarter of revenue growth over 50% has persuaded the market to look past the short-term losses: JD’s stock has risen 53% this year and 77% since its IPO last summer—to a future in which even residents in China small cities can depend on same-day delivery for an item that already includes the delivery cost in its price.

Every story about Apple selling same-day delivery for $19, Amazon offering nominally free same-day delivery (if your order is $35 or more, and if you pay $99 a year for prime), and Uber piloting a same-day program only now with retailers like Neiman Marcus, reinforces the appearance that the U.S. isn’t leading the charge on delivery—it’s catching up.

Correction: Post updated to reflect that Alibaba’s delivery option is next-day, not same-day.