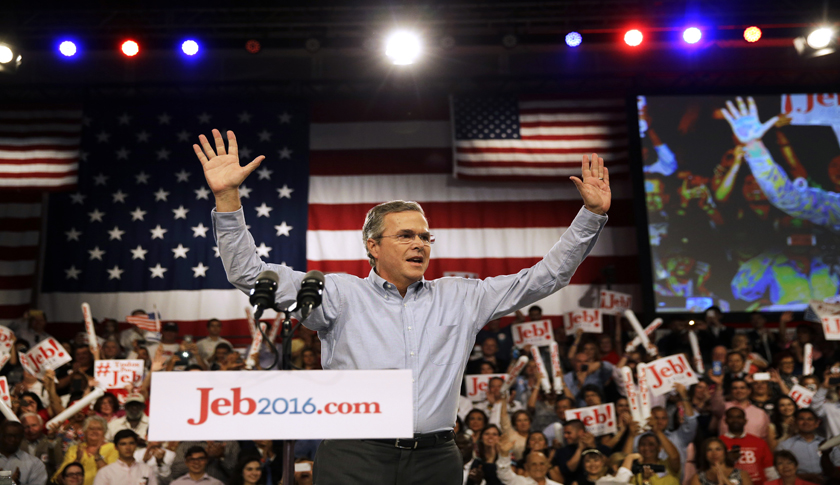 Jeb Bush recently announced his candidacy for president by declaring that “our country is on a very bad course” and promised to fix this with the striking promise of “4% growth, and the 19 million new jobs that come with it.”

The former governor stated in his speech that he grew the Florida economy by that much every year during his two terms in office. Can he deliver the same growth in gross domestic product (GDP) for the entire US if elected?

Why the growth rate matters

The importance of small changes in growth is seen by understanding the “rule of 70.” Dividing 70 by the growth rate stripped of its percentage sign determines the number of years it takes for an economy to double in size (for details, see chapter 12).

For example, in 2014, inflation-adjusted, or real, US GDP grew 2.4%. If the economy continues to grow at this rate, it will be twice as large in about 29 years (70 divided by 2.4). In other words, about three decades from now the US will produce twice as many cars, homes, planes, doctor visits and everything else made in the economy each year as it produces today.

This seems pretty good, but increasing the rate to 4% means the US will double in size in 17.5 years, which is about a dozen years faster! Small differences in growth rates make large differences in the speed of progress. How all these extra cars, homes and other items will get distributed was not defined in the speech, but there is clearly a bigger economic pie to be shared by boosting GDP growth.

To support the notion that he could juice up growth that much, Bush claimed he grew the Florida economy by 4.4% annually, which compares quite favorably to last year’s anemic 2.4% national rate.

Did he actually achieve this? The Bureau of Economic Analysis (BEA) is the official federal agency that tracks GDP at both the state and national level. Bush served as governor of Florida for eight years, from January 5, 1999 through January 2, 2007.

During his time as governor, a BEA state-level analysis shows that Florida’s inflation-adjusted economy did grow by an average of 4.4% per year. At the same time, the national growth rate was only 2.7% per year.

However, BEA figures show Florida’s GDP shrank dramatically after Bush left office, with the economy contracting an average of 3.4% yearly from 2007 to 2010, while the US declined only 0.3% a year over the same time frame.

It takes time for individuals and businesses to react to the economic policies of presidents and governors. This means a better measure of a politician’s economic record should include not only their time in office, but also time after they have left. While the precise dates that should be used are subject to debate, including some or all of Florida’s crash during the Great Recession reduces or eliminates the gap in GDP growth between Florida and the rest of the US.

Official US GDP figures were started by economist Simon Kuznets in the early 1930s to shift analysis of the Great Depression from anecdotal to a fact-based approach.

Professor Kuznets, who won the Nobel Prize for economics in 1971 (only the third one awarded), was unable to make precise GDP estimates for years prior to 1929. In the 85 years since Kuznets started tracking US GDP, the country has had 37 years during which real growth was 4% or higher.

The historical record shows that since the start of the Great Depression, the US grew at Bush’s target rate about four out of every 10 years, suggesting multiple years of 4% growth is quite realistic and possible.

In his announcement, candidate Bush states that he will boost economic growth by changing the tax code into a “vastly simpler system,” eliminating “over-regulation,” reducing the government’s dependence on “borrowed money” and ensuring “energy security.” Could these policy changes boost economic growth enough to reach his goal?

While Bush’s proposals sound promising, it is extremely difficult to prove that any of these four policies will bolster economic growth.

Let’s take just one issue, the tax code. Both sides of the political aisle agree that the tax code has become unwieldy and distorts the economy. There have been numerous high-level discussions on the topic, such as President Obama’s 2012 plan to simplify business taxes. However, many analysts are pessimistic about the chances of any meaningful tax reform.

Ignoring the political problems of pushing through a major tax reform bill, it is impossible to accurately predict if reforming taxes will result in boosting GDP growth from 2% to 4%. An example of this economic uncertainty is found in the work of Congress’s Joint Committee on Taxation. The committee is staffed by expert economists who analyze in a nonpartisan way how changing taxes affects the economy.

Their analysis of the Tax Reform Act of 2012 (check out table 3) estimated that real growth rates would change anywhere from 0.1% to 0.8%, depending on how the Federal Reserve and individual workers reacted. The true impact of major federal government overhauls is only known years after the policies are implemented.

Promising 4% growth is a great campaign speech soundbite. Delivering consistent 4% economic growth after adjusting for inflation is tough for a president to deliver, since so much depends on factors outside the Oval Office’s control.

Jay L. Zagorsky is an economist and research scientist at The Ohio State University. This article was originally published on The Conversation. Read the original article here.