Can Argentina’s ‘ragmen’ make it in the mainstream? 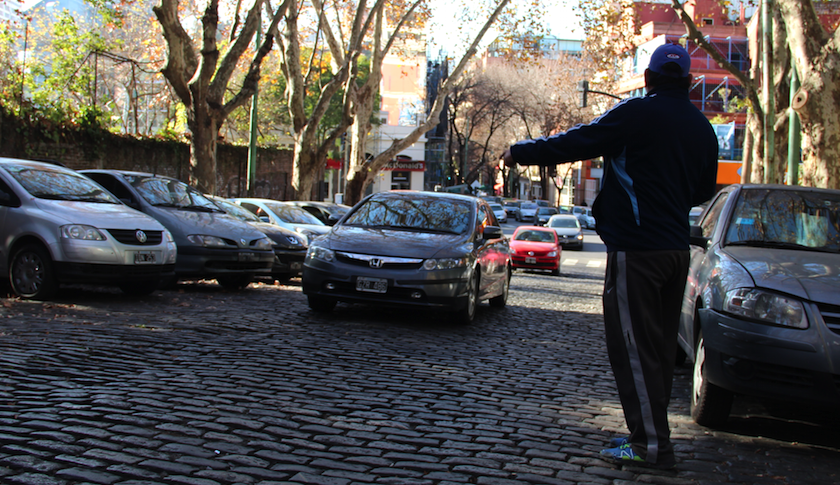 A ragman at work in Buenos Aires
Jonathan Gilbert

To most drivers hunting for a parking space in Buenos Aires, they are a scourge. At the city’s legislature, where debates about their business divide lawmakers, they are no more welcome.

Across the Argentine capital, trapitos, or ragmen, motion drivers to parallel park on public streets and, in return for a small tip, keep an eye on the cars. They earned their unofficial title because they wave rags to signal free spaces and guide drivers toward the curb.

Over the last decade, drivers have learned to live with the ragmen, but most abhor them. While the tip is often voluntary, many feel obliged to hand over cash because they fear the attendant will otherwise seek retribution by damaging their car.

Lawmakers have tried to tackle this subsector of Argentina’s gray economy, but it is such a contentious issue that debates serve only to highlight partisan fissures. In recent years, several bills from different political parties have failed—some sought to regulate the ragmen’s business; others wanted a police crackdown.

Argentina’s gray economy boomed after its high-profile economic collapse of 2001. As the country recovered and grew, immigration waves also spurred informal work. Authorities subsequently began discussing what they should do.

One of the first efforts to deal with the ragmen, who are mainly Argentine, was a bill proposed by city lawmakers from the Front for Victory, a center-left party that also controls the federal government. The bill proposed means-testing the ragmen and giving the poorest individuals licenses to work a specific block during a specific time of day. If they were reported to be extorting clients instead of taking voluntary tips, they would be punished with fines or community service. (A provision for this is already on the books, but as things stand, it’s almost impossible to enforce.)

The bill passed, but it was vetoed by Buenos Aires mayor, Mauricio Macri, of the center-right Republican Proposal party (Pro), which has repeatedly lobbied for prohibition over legalization. “We don’t believe a private individual should be able to claim ownership of a public space,” says Francisco Quintana, a Pro lawmaker.

That approach definitely has support, especially in the upper-middle class neighborhoods to which the ragmen flock. An editorial pitying drivers in La Nación, a newspaper favored by Argentina’s establishment, argued that a solution “must never involve legalizing the illegal.”

But many say the Pro’s insistence on outright prohibition is misguided and archaic. They point to nearby examples where different methods of formalizing unofficial parking attendants have had positive results.

“It’s not black or white,” says Claudia Neira, a Front for Victory lawmaker who has sponsored legislation to regulate the attendants. “We can’t be unyielding; there are several options.”

Across the River Plate in the Uruguayan capital of Montevideo, the municipal government there has registered unofficial attendants for years, giving them license cards and high-visibility vests, and allocating them a block during regular working hours.

One of the major benefits, says José María Cabrera, an economist at the University of Montevideo who co-wrote a paper about the program, is that it secures a patch for the attendants and prevents scuffles over territory. The 1,700 enrolled attendants, most of whom have spent more than a decade working in the gray economy, may also begin paying social security tax. “It’s not ideal, but without a doubt, formality is better than informality,” Cabrera says.

Similarly in Córdoba, Argentina’s second-largest city, local authorities have acquiesced to cooperatives of unofficial parking attendants and even allow them to charge a small fixed fee, instead of tips.

The problem with leaving the attendants unregulated in Buenos Aires, says Juan Grabois, a lawyer at a confederation that pushes for the inclusion of informal jobs in the mainstream economy, is that they often end up under the thumb of police, who request bribes, or mafia-like groups of supporters linked to professional soccer clubs, who charge a huge commission on match days. “All deregulation achieves is extortion by middlemen,” Grabois says.

One attendant, Jorge Elizalde, 40, says he gives the police around $60 dollars a week to work his patch next to a busy conference center in Buenos Aires’s Palermo neighborhood.

As informal economies proliferate worldwide, suppressing the gray economy is counterproductive, says Robert Neuwirth, author of Stealth of Nations. “I don’t think the punitive approach works,” he says, explaining that the result is usually a transfer of activity from one place to another. Rather, Neuwirth says, the best strategy is to make the situation beneficial for drivers and attendants alike.

Buenos Aires Mayor Macri, who is running for president of Argentina in October’s elections, has already seen the benefits of pliable policymaking. He once promised to purge Buenos Aires of recyclers who sieve through street trash, but now his government supports the cooperatives into which they organized. This helped their wide acceptance by society, when before they had been disregarded.

“It doesn’t need a heavy-duty bureaucracy. If you bring the stakeholders together and broker a deal to ensure it’s a public service, it doesn’t matter if it’s informal—it just has to work,” Neuwirth says. As an example, he points to Alaba, a sprawling electronics market in Lagos, Nigeria, where unofficial parking attendants mitigate the chaos.

Some attendants who work outside of the reach of middlemen in less commercial areas of Buenos Aires have achieved this balance. For 14 years, Julio Gorosito, 39, and his brother have been working a block close to the Belgrano neighborhood where there are a church and a school. Teachers and churchgoers trust him, he says. He makes about $35 dollars a day in voluntary tips and can double his income by washing cars.

Gorosito, who used to rob houses and once served a prison sentence, says he became a ragman because there’s not enough casual construction and plumbing work in the suburb where he lives. “I started doing this instead of kicking doors in; now, it’s my living,” he says as he uses a grimy orange rag to motion a car toward a space. Gorosito wants recognition by the authorities via a scheme like the one in Montevideo.

But there could be downsides to formalizing the work of the 2,800 attendants that Grabois’s confederation estimates work the streets in Buenos Aires.

Cabrera, the Uruguayan economist, says the success of the program in Montevideo has risked establishing the attendants’ business as a desirable and comfortable line of work, when it should only be transitory step to a job in the formal economy.

Meanwhile, the politicking in Buenos Aires appears to have no end. Another Front for Victory bill was approved in the chamber, but Macri’s Pro government recently let it expire without signing off on it. At least eight bills that offer a range of solutions are languishing in the city’s legislature, says Neira, the Front for Victory lawmaker.

Still, some agreement could be forthcoming. Both parties have proposed new bills to ban attendants from working close to soccer stadiums on match days or during music concerts—where racketeers dominate and exorbitant tariffs are fixed. But the measures are more of an attempt to stifle an income source of the mafia-like groups of soccer supporters whose violence and influence Argentines have grown weary of. The wider fate of the ragmen, meanwhile, remains undecided.