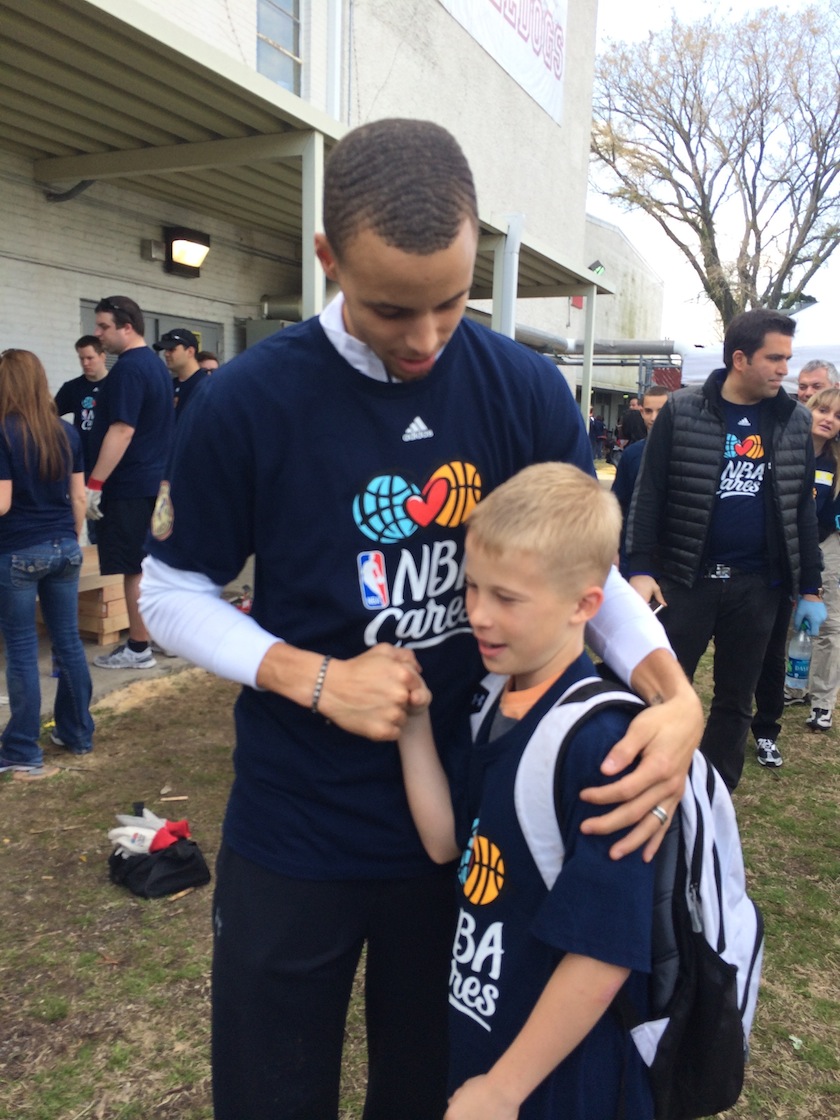 When Stanford University Professor Jennifer Aaker and her venture capitalist husband, Andy Smith, wrote The Dragonfly Effect, which is about ways to use social media to drive social change, they hoped it would inspire their three young children to lead purposeful lives. Little did they imagine that their son Cooper would find his purpose with the help of a world-famous NBA champion.

But that is exactly what happened, ever since 13-year-old Cooper Smith met Stephen Curry, the Golden State Warriors guard who scored 25 points on Tuesday night and carried his team to an NBA championship.

The boy and the superstar athlete met three years ago, when Cooper was in fifth grade and only a few crazy fans thought Steph Curry would grow to be pro basketball’s reigning hero. Before a Warriors game at Oracle Arena in Oakland, Calif., Cooper and his family went to a reception in support of Nothing But Nets, a non-profit program that provides bed-nets to people in Africa to protect them from malaria-infected mosquitoes. They met Steph Curry that day, and the Warriors player talked about his own work for Nothing But Nets: For every three pointer he would sink that season, he pledged to donate three $10 bed-nets to a family in Africa.

“Cooper was mesmerized,” his mother recalls. Instead of asking for presents for his 10th birthday, Cooper decided to ask for donations to the UN Foundation’s Nothing But Nets initiative. Cooper got heaps of encouragement from Nothing But Nets Director Chris Helfrich, the Smith’s neighbor, who is also pals with Curry.

A year later, Cooper donated his 11th birthday gifts to Nothing But Nets and staged a basketball fundraiser for the campaign. “Cooper started to believe deeply that his actions really matter—that making an impact on people he doesn’t even know is part of who he is,” says his mom.

Yep, Cooper’s only a kid. “But he isn’t just a student or an athlete,” his mother explains. “He feels like he’s a philanthropist.” Cooper’s passion has not abated. Through family, friends, and social networks including Facebook (FB) and Twitter (TWTR), he has helped raise more than $10,000 for Nothing But Nets.

And here’s a really cool gift that has come back to Cooper: Through Nothing But Nets’ Helfrich and his wife, Cooper and his family have become close friends with Steph and his wife, Ayesha. And when they visit the Currys, Steph teaches Cooper about much more than how to sink a shot. Here, Cooper Smith explains what his good friend Steph has taught him about how to be successful in life.

It doesn’t matter where you start; it’s about where you finish.

When I was at Steph’s home last, he was giving me tips on how to improve my shooting. He says the key is to remember that it doesn’t matter where you start. All that matters is where you finish. For example, I was finishing the shot on my right shoulder, even though I am a leftie. Steph told me that I should finish off my left side. He said it doesn’t matter if you carry to the right and move to the left; you just have to think about where you finish. I don’t know about this fact, but I understood the idea. And now I keep thinking about where I want to finish.

Steph has told me to keep doing what I am doing for Nothing But Nets—to keep raising money and to keep bringing awareness to the organization. He is always giving back to the community, whether it’s with Nothing But Nets or in his hometown of Akron, Ohio, or his friends and family. He won the Kia Community Assist award, I think, because of his work with Nothing But Nets. He just keeps giving and giving.

Steph really believes in people. Like Ayesha. He believes in her and in what she wants to do with her business. So he does funny things with her, like Cooking with Curries on YouTube (GOOG). I think that shows how committed he is to what she is doing. Or Bryant Barr, Steph’s best friend and one of the main reasons he got involved in Nothing But Nets. Steph really believes in Bryant and also in the ability of Nothing But Nets to help children. Steph believes in his own path, too. At Davidson, where he went to college, he believed in his ability to excel in basketball. And now look, he’s an NBA champion. He just believes, maybe more than most of us, that if you pursue a goal, you can achieve it.