How James Murdoch can escape his father’s shadow 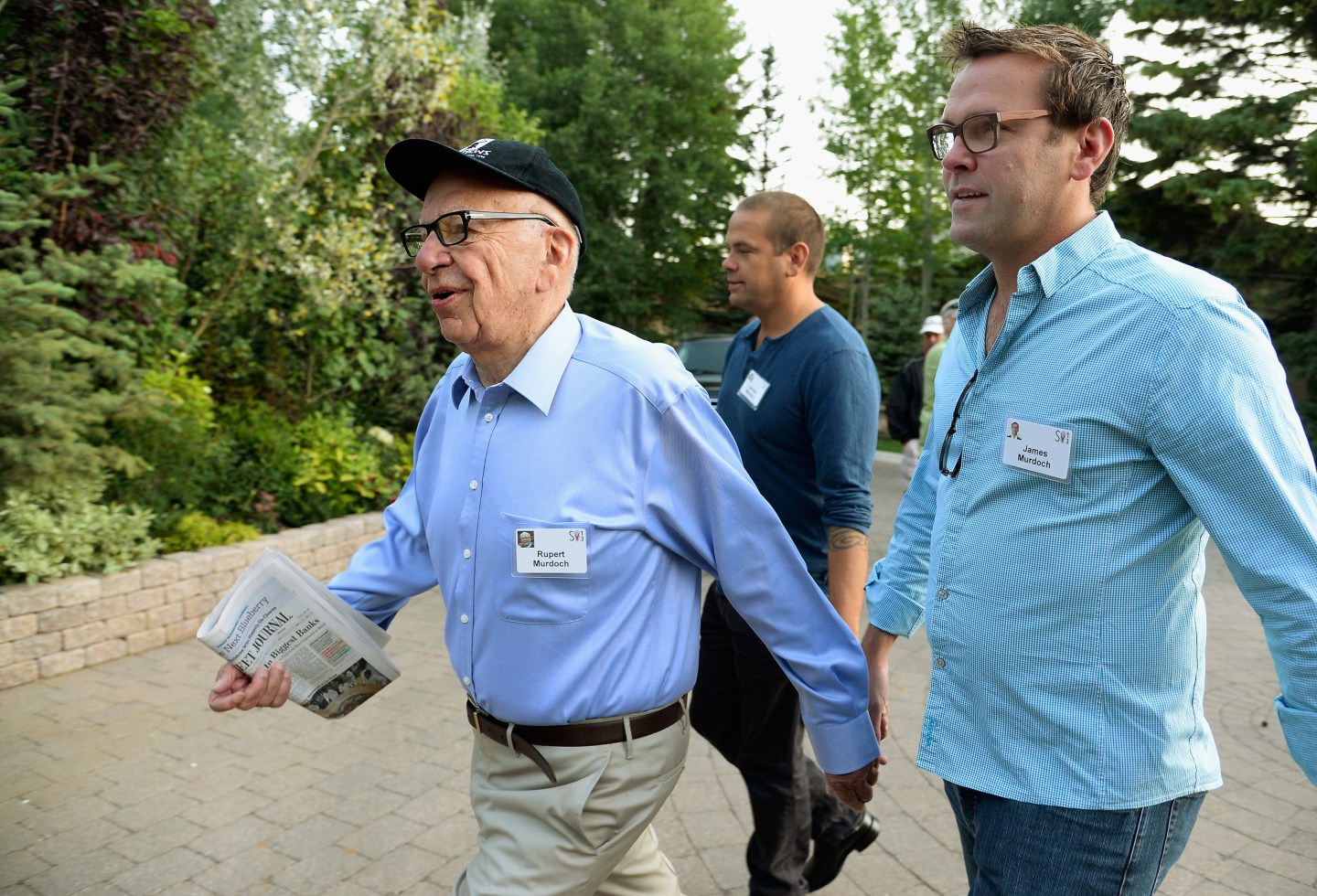 Family names like Rockefeller, Sulzberger and Carnegie dot the landscape of American history. They have shaped the culture and character of our nation and the world. The legends and lore of these dynastic families can cast a long shadow over members of the next generation; they are expected to repeat the successes of their parents and grandparents and are always seen in relationship to their family legacy.

Perhaps one of the next families to approach this dynastic status is the Murdoch family of News Corporation. At 21st Century Fox’s board of directors meeting on Tuesday, members approved to pass the CEO title to Rupert Murdoch’s younger son, James Murdoch, 42. James is currently co-chief operating officer. Meanwhile, Murdoch’s older son, Lachlan Murdoch, 43, will be elevated from non-executive co-chairman to executive co-chairman.

The announcement marks the next chapter in the life of this iconic family.

In stepping into leadership at 21st Century Fox (FOX), James Murdoch will come face to face with the shadow of his 84-year-old father. The articles and stories about how Rupert inherited leadership of Australia’s News Limited from his father Sir Keith Arthur Murdoch in 1952, and went on to establish the $75 billion media behemoth News Corp., can fill volumes, which leaves James with the lingering question of how can I possibly live up to the legacy of my father?

This is the “successor’s curse,” the expectation of others that in order to be successful, James Murdoch must repeat the successes of his father and that he must lead the way his father led. The expectations of the employees, shareholders and the media that James live up to this legacy are also laden with the message that he can never live up to what his father has done, that the only reason that James is in this position is because of his last name. Stepping out of this shadow and reversing this curse is no small feat.

The pressure of the successor’s curse can threaten to engulf a successor such as James, leading to what most people see as the stereotype of a family business successor—the entitled next generation member who lives a lavish lifestyle and squanders away the family wealth.

Through 20 years of working with and educating successors, and interviews with iconic successors, such as Bill Wrigley, Christie Hefner, Massimo Ferragamo, and John Tyson, I have learned that there are many ways that James can meet these challenges and step out of the shadow of his father.

First, he must establish his own internal compass. Successors in family businesses grow up in an environment where people think that success equals doing it the way that their parents did it. The reality is that the current and future challenges of the family business may be very different than the challenges faced by one’s parents. In order to be able to deal with these pressures, James must establish a leadership style that is authentic to who he is as a leader. He must establish a vision for the future of 21st Century Fox that is driven by what is best for the company, not by trying to please or emulate his father. Bill Wrigley said it best when he said, “Respect the past, but always do what is right for the future.”

One of the most difficult aspects of this journey, for James, will be developing a sense of self awareness. Knowing your strengths and weaknesses, and surrounding yourself with people who compliment your skill sets and are aligned with your vision is critical to long term success as a successor. A challenge to this process is getting feedback. Many successors find it difficult to get accurate feedback on their performance. Too often the feedback that they get is sugar coated by people who want to court their favor or too harsh because people are jealous of the opportunities that they have. Successful successors develop the ability to assess themselves and the reality of the business climate and make decisions that can often generate resistance and pushback.

To earn the respect necessary to make these decisions, a successor must establish credibility with the stakeholders of the business. Former Playboy Enterprises CEO Christie Hefner put it this way, “True power is given to you by those you lead, not by those who gave you the job.” One of the challenges that James Murdoch will face is establishing his credibility with the stakeholders of 21st Century Fox, where many are still harboring questions about his performance as the head of News Corps European businesses during the phone hacking scandals that surfaced in 2011.

Failure is a necessary part of leadership development, yet when stories of iconic leaders such as Rupert Murdoch are told, often their failures fade away in the telling of the story. When perceived failures of a successor, such as the phone hacking scandal, are very public, they can be very hard for the successor to live down.

What I have learned from two decades of working with family business successors is that true credibility is earned. Successors earn this credibility by building a track record of performance, overcoming failures, working hard to continually improve themselves, being fair and supporting the growth and development of their people, and making the tough decisions that are necessary for the long term viability and success of the family business.

While the successor’s curse might lead us to believe that being born into an iconic family such as the Murdoch’s means that one can never achieve success in his own right, there are paths out of a parent’s shadow that a successor must take. To do so, they must have the courage to develop their own unique vision for the company, and their own sense of values. This can only be done by hard work, continually cultivating self-awareness and establishing credibility. James Murdoch’s legacy won’t be the title that his father bestowed on him, it will be what he does with the opportunities that this position presents.

Andrew Keyt is the author of Myths and Mortals: Family Business Leadership and Succession Planning (Wiley; July 2015). As the Executive Director of the Loyola University Chicago Family Business Center, CEO of Family Business Network North America (FBN-NA) and working directly with families in his consulting business, Keyt has dedicated nearly 20 years to helping families navigate the unique ownership challenges and complex transitions that come along with successful family business stewardship.