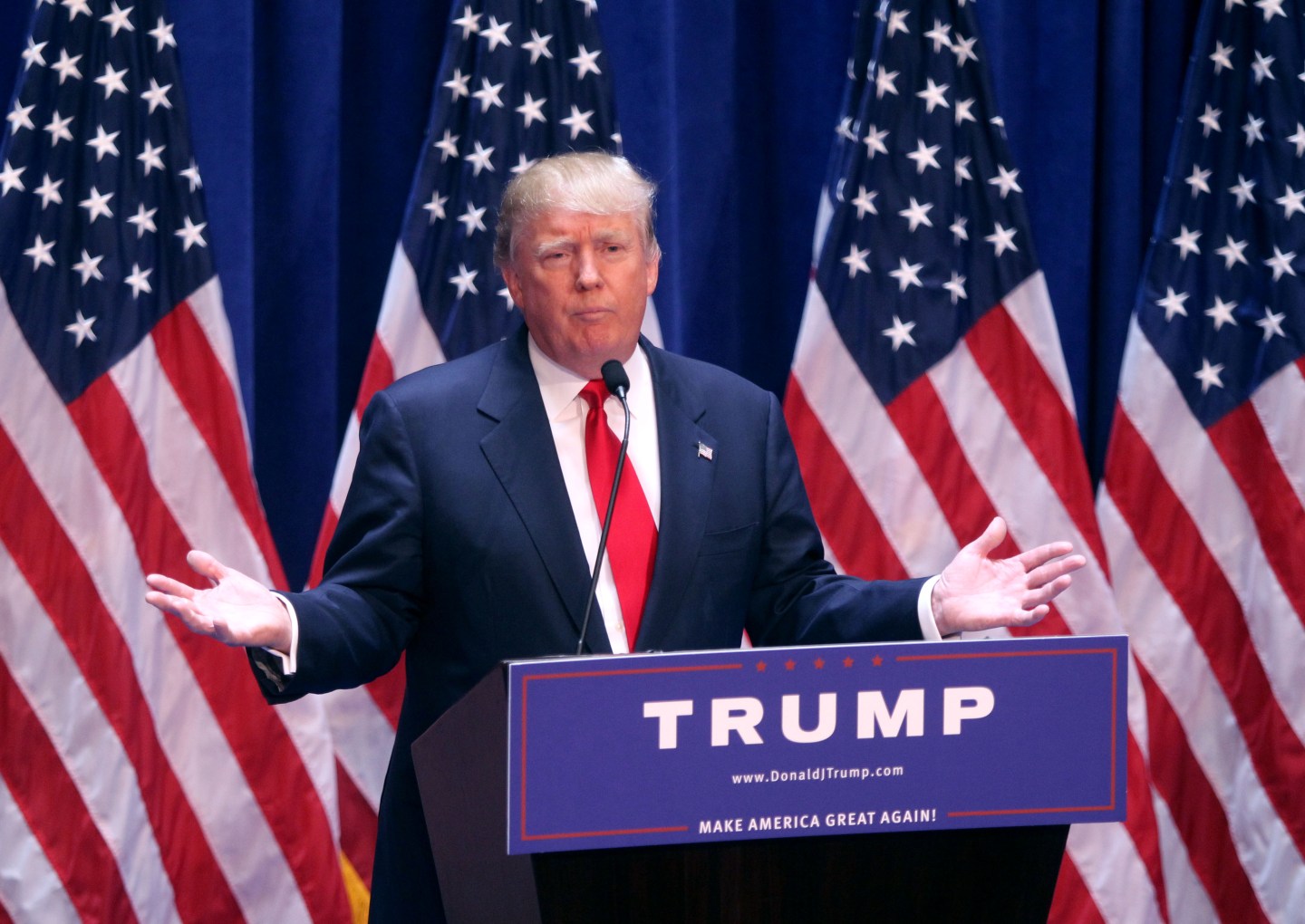 When Donald Trump announced Tuesday that he’s running for president, he did so to the righteous power chords of Neil Young’s “Rockin’ in the Free World.”

Young, who is famously left wing — come on, the guy wrote “Ohio” as a condemnation of the National Guard shootings at Kent State less than a month after the incident — was not exactly happy about Trump’s playlist. He told Trump to stop using his song, and said he’s supporting Democratic presidential candidate Bernie Sanders. Young, of course, is a Canadian citizen and won’t be able to cast a vote for either.

Even if Trump hadn’t said anything, “Rockin’ in the Free World” is a completely bizarre choice of song for Trump. This isn’t Neil Young talking about Harvest Moons or the Needle and the Damage Done — this is Neil Young in fierce folk-singer protest firebrand mode, with lyrics that don’t just evoke, but outright mock President George H.W. Bush:

We got a thousand points of light
For the homeless man
We got a kinder, gentler,
Machine gun hand

The “thousand points of light” is a reference to Bush’s acceptance speech at the 1988 Republican National Convention. Look, it’s going to be hard to find an appropriate theme song for yourself if you’re a Republican candidate. Most rockers tend to be leftys, and there is only so much Ted Nugent the world can take. But would it be too much to ask that Republican politicians at least find a song with lyrics that aren’t an outright rebuke of everything they stand for?

Here are six other politicians who got into trouble for rocking a bit too hard:

When she was a high school basketball player, Sarah Palin went by the nickname "Sarah Barracuda," so it makes sense that the former governor of Alaska would use the song "Barracuda" by Heart as her theme song when running for vice president in 2008.

The band, though didn't take kindly to it, issuing a statement saying that "Sarah Palin's views and values in NO WAY represent us as American women. We ask that our song 'Barracuda' no longer be used to promote her image."

Sen. John McCain on the campaign trail in 2008.

The 2008 Republican ticket just couldn't catch a break. During primary season, John McCain used two tracks from Indiana's pride, John Mellencamp: "Pink Houses" and "Our Country." The only problem is that the artist formerly known as Johnny Cougar is a strong supporter of the Democratic Party, and asked the McCain campaign to stop using his tunes.

During his re-election campaign, American politician and US President Ronald Reagan (1911 - 2004) give the thumb's up' to unseen supporters, June 1984.

"Born in the USA" is a rollicking, rocking song — the E Street Band plays with such power and Bruce Springsteen yelps with such ferocity that you feel like you're letting down George Washington based on the simple fact that you aren't waving Old Glory at that very moment — until you listen to the lyrics, that is. Because underneath the pounding drums and strident synthesizer, the song is a scathing critique of the Vietnam war and the way Vietnam veterans were treated by the government.

Ronald Reagan, though, apparently only listened to the chourus, and praised Springsteen as a message of hope for America. A few weeks later, Springsteen wondered aloud on stage if Reagan had ever listened to his album "Nebraska" — a dark, acoustic disc about broken lives and broken dreams in Reagan's America.

You can't really blame Wisconsin Governor Scott Walker for using "Shipping up to Boston" by Celtic-punk band Dropkick Murphys during a rally in 2015 — the banjo, tinwhistle, and electric guitar are enough to get anyone's blood pumping. But the Boston-based band didn't care about any of that, tweeting at Walker that they "literally hate" him and demanding he not use their music.

Paul Ryan and Rage Against the Machine

Paul Ryan never actually used any Rage Against the Machine songs when he was running for vice-president as a Republican in 2012 — we doubt any politician would use songs with lyrics about taking over the means of production and freeing Mumia Abu-Jamal (except for maybe Bernie Sanders).

But Ryan did claim in an interview that, despite the lyrics, the Zapatista-supporting, red star-wearing L.A.-based rap/metal band was one of his favorites. Guitar player Tom Morello didn't like that, so he wrote an op-ed in Rolling Stone saying that Ryan "is the embodiment of the machine that our music has been raging against for two decades."

This one is a bit more complicated. Christie is a Republican, yes, but he's also from New Jersey, so loving Springsteen is his birthright. He invited the rocker to play his inauguration, but The Boss declined. After Hurricane Sandy devastated the state, they made up — but Springsteen still got in a few jokes about the "bridgegate" scandal on Jimmy Fallon's show last year.