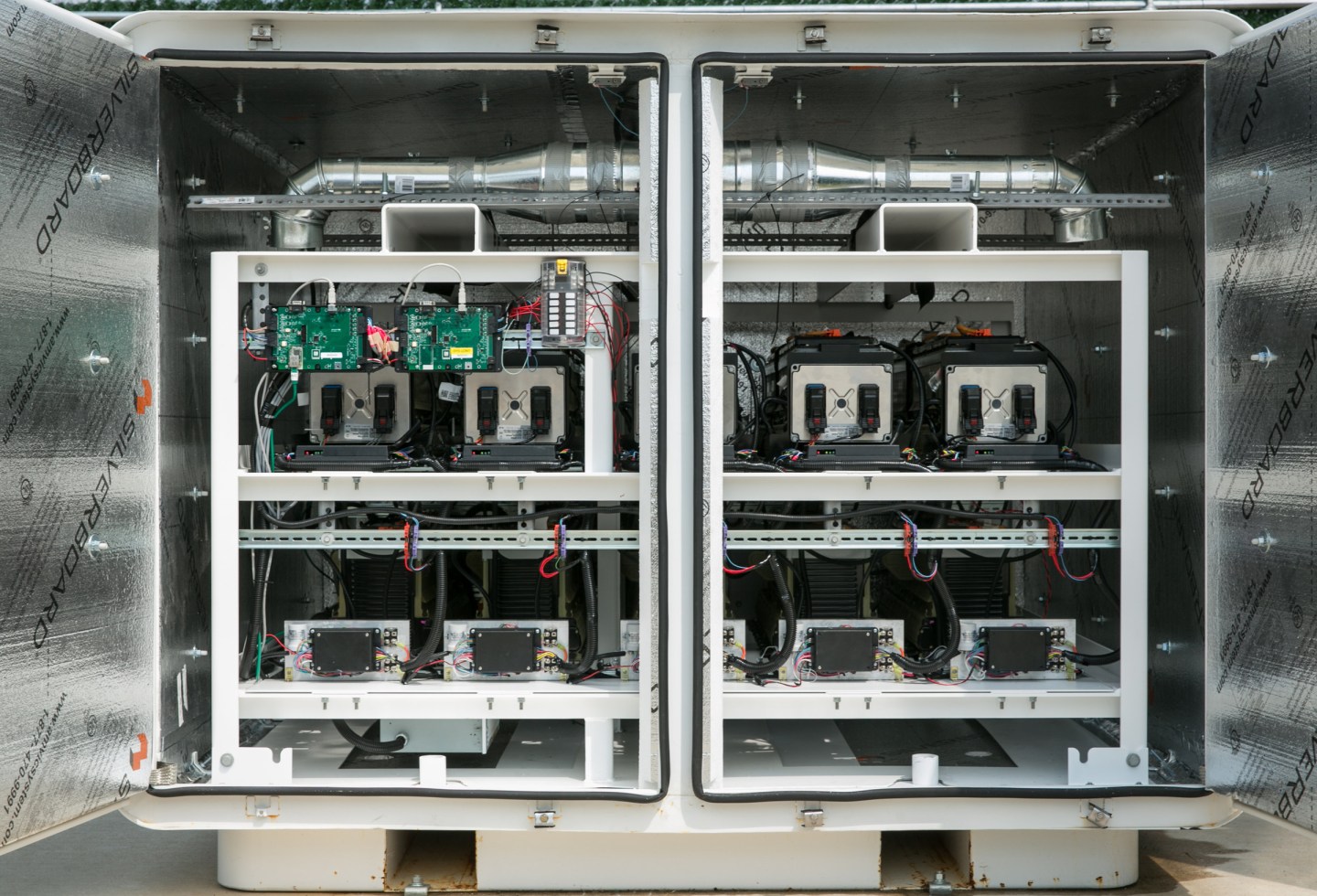 Five years ago, as the first Chevy Volt plug-in electric hybrids were rolling off the assembly line, the business case for used electric car batteries seemed meager at best.

Advanced battery technology, concerns with greenhouse gas emissions, and spiking gas prices all had helped boost interest and investment into electric cars. Still, they could hardly be called mainstream. The Nissan LEAF, still the leader in global EV sales today, had just debuted and the Tesla Model S was only a prototype. In 2011, global sales of EVs reached a minuscule 45,000, according to the International Energy Agency. Global EV stock by the end of 2012 would only represent 0.02 percent of total passenger cars.

But even then, some automakers and energy companies saw an opportunity— at least one worth investigating— in old electric car batteries. GM was one of them.

Today, GM lifted the veil on how it thinks old electric car batteries can be used. Five Chevy Volt electric batteries— working in parallel with a solar array and two wind turbines— are providing power to the General Motors Enterprise Data Center at the Milford Proving Ground.

The 74-kilowatt ground-mounted solar and the 2-kw wind turbines generate enough energy to power the office building and lighting at an adjacent parking lot at the Milford Proving Ground— coincidentally the same place where the Chevy Volt battery was first tested and validated.

While these secondhand batteries can be used as a source of backup power, their primary job will be as a daily cycling unit. This means, the batteries will be charged and discharged daily. For example, they might store energy generated by the solar panels during the day to be used at night.

Even after an electric car battery reaches the end of its useful life in a Chevy Volt, up to 80 percent of its storage capacity remains. That’s not very meaningful if you sell a few thousand cars. But global sales of the first-generation Chevy Volt have reached 77,000; the 2016 Volt, which will have an estimated 50 miles of EV range, is expected to push sales higher. That’s not even counting the other EVs on the market. The Department of Energy has forecast about 1 million lithium-ion batteries per year coming available from various automakers for the secondary market beginning in 2020.

“We had a vision, from the beginning, of a secondary use for these batteries,” Pablo Valencia, senior manager of GM’s battery life cycle management department, told Fortune.

GM has been testing applications for old electric car batteries since 2012. The automaker, ABB, and Oak Ridge National Laboratory developed a test platform designed to study the feasibility of an energy storage system. GM has now moved this experiment from the lab to the Milford Proving Ground.

The biggest hurdle for any secondary use of old electric batteries isn’t really a technical one, Valencia says.

“We often look at the grid as being homogeneous, but really it’s very different at each point,” Valencia says. A utility needs a variety of energy storage solutions, including back-up power and peak shaving— which is when energy is pulled from the battery when power grid rates are high. Any viable solution will have to be able to customize and bundle different options.

“This all started with a challenge from the utilities,” Valencia says. “We, as automakers, have to understand the grid market and then make the right partnerships to serve that market to be successful.”