Reuters survey has good news and bad news for media, but mostly bad 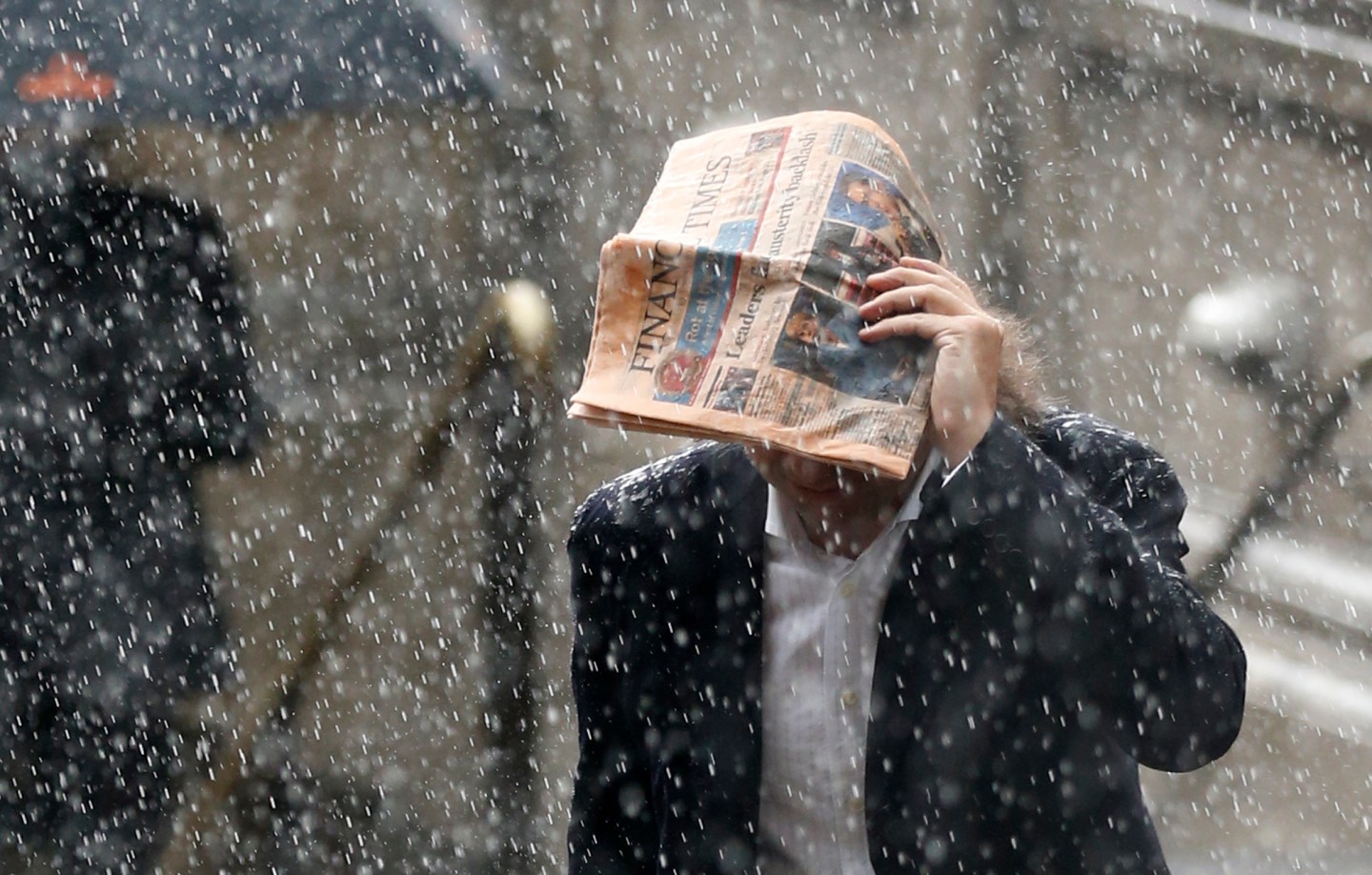 FILE This Wednesday, April 25, 2012 file photo shows a man sheltering under a copy of the Financial Times newspaper as he runs through a heavy rain shower outside the Bank of England in London. Sodden fields. Puddles. Floods. This is what drought looks like in Britain. Last month, water authorities banned 20 million homeowners from using hoses to water their lawns or wash their cars, saying two of the driest winters on record had plunged much of Britain into drought. Since then, the rain has hardly let up. (AP Photo/Matt Dunham)
Photograph by Matt Dunham — AP

Every year, the Reuters Institute for News puts together a global survey of news-consumption habits and behavior around the world, and the new one was just released. The report often serves as a kind of wake-up call for traditional media companies about how their audiences (or potential audiences) are changing, and the latest version is no exception.

As usual, the response to the study will be somewhere between fear and excitement, depending on who is reading it: If they work at a media outlet that is focused on mobile, social and online then they will probably be excited or enthusiastic. Anyone else is likely to feel a creeping sense of dread.

Among the bright spots in the report is the fact that people are consuming plenty of news. But it’s not coming from the usual places, and the vast majority of users don’t pay for it—and most say they probably never will. That’s great if you’re interested in the spread of news and journalism, but probably not so great if you are a media outlet that is trying to build a sustainable business around it.

Reuters says mobile usage for news continues to increase, as it has for the past several years: More than 65% of smartphone users say they use their devices for news at least once a week, and for those under the age of 35, about 40% say the smartphone is the main way they consume news.

So that should mean that mobile and tablet apps are the way to go for news entities, right? Not really. The survey shows that tablet usage continues to decline, and a majority of those who used their smartphones for news said that they primarily got that news through their mobile web browser, not through a dedicated app—even though plenty have one installed.

“Even though 70% of smartphone users have a news app installed on their phone, only a third of respondents actually use them in a given week, reinforcing the difficulty many news brands have in cutting through on this crowded and very personal device.”

Those figures could in turn be connected to the increasingly social aspect of news, since links from Facebook and Twitter and other social sources would open in a browser rather than a dedicated app. Social continues to displace almost every other source for news, especially for millennials users—and that includes TV: About 60% of younger users say they get their news online (including social media) compared with less than 30% who say they get their news primarily from television.

Not surprisingly, Facebook is the number one source of social news for most users, with over 40% of respondents from all age groups saying they have used the network to get news in the past week. Interestingly, YouTube was the number two destination for social news, and Twitter was number three, with about 12% of people saying they got news there during the previous week.

Despite the large numbers of users who said they got their news from Facebook, however, the Reuters report notes that people tend to come across it while they are doing other things—as opposed to a network like Twitter, where users actively go to find the news. As the study put it: “We seek news on Twitter but bump into it on Facebook.” Still, the huge proportion of users who find news on Facebook reinforces how important it is to be aware of the network’s filtering algorithms and their effect on what users see.

In one question, Reuters asked whether users who got their news online had gone to a traditional news brand or one of the “digital born” players such as The Huffington Post, Yahoo, BuzzFeed, etc. Traditional sources won out in a number of markets such as the U.K., Germany and Denmark, but in other countries—including the U.S., Japan and Australia—a majority said they mostly used digital-native sources.

And if you have a paywall around your news, or are thinking about implementing a subscription plan, the Reuters survey doesn’t have great news for you: The proportion of people who are willing to pay is still small, and it isn’t increasing: In the U.S., 67% of respondents said they would never pay for news no matter what the price, and in the U.K. 75% of people agreed with that statement.

“We see no discernible trend towards an increase in paid online content – or in willingness to pay. A small number of loyal readers have been persuaded to pay for brands they like but it is proving hard to convert casual readers when there is so much free news available from both commercial media companies and public service media.”

So most media outlets will have to use advertising to support their journalism, right? Yes, but the Reuters report also notes that in the U.S. almost half of respondents use ad-blocking software and in the U.K. 39% do. And while many media companies see native advertising or sponsored content as a solution to this problem, that has risks as well: More than a third of users who took part in the survey said they had felt disappointed or deceived by a piece of sponsored content.