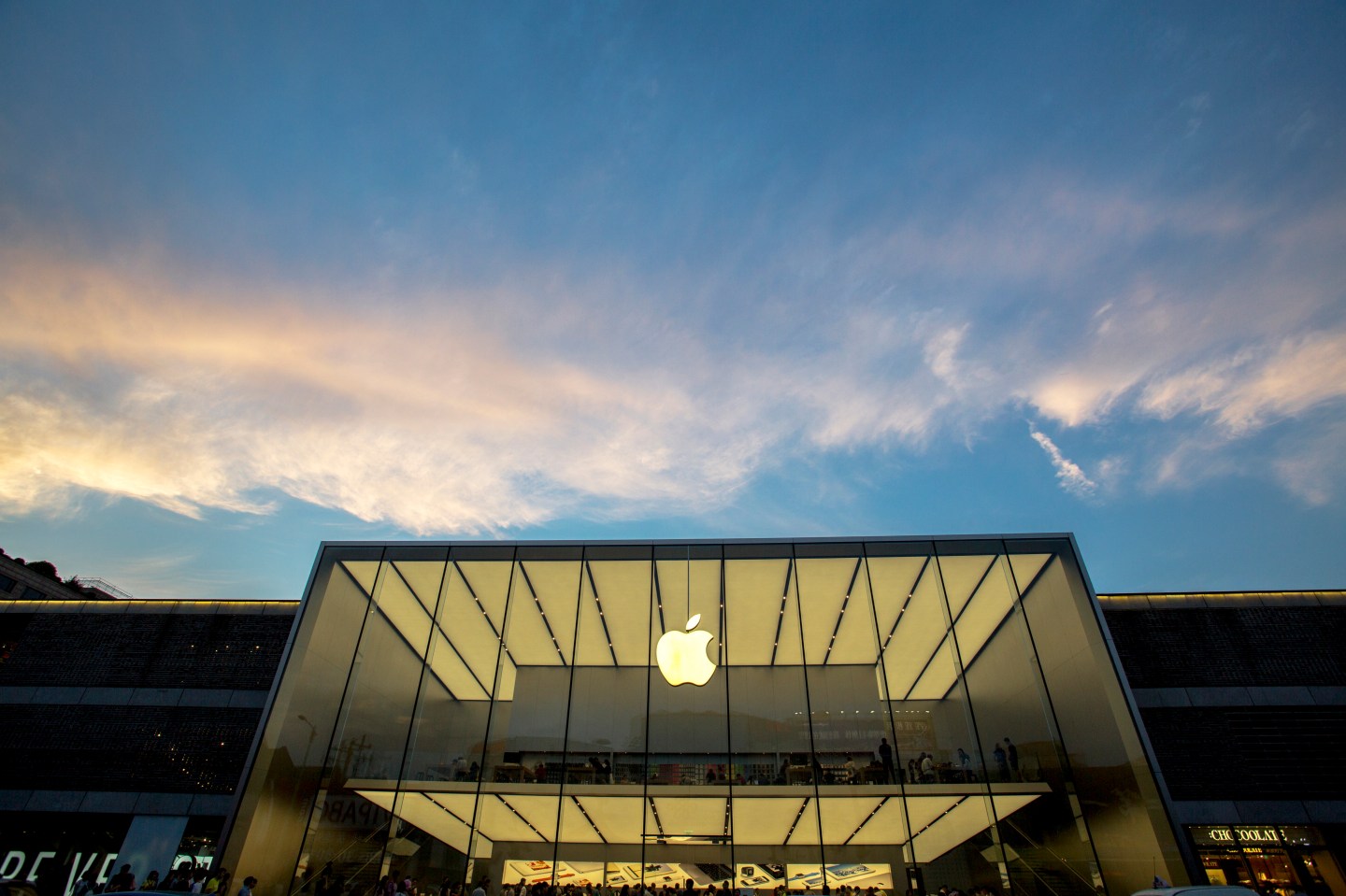 To be in the Fortune 500, a company must have recorded at least $5.19 billion in sales last year. But how fast did they get there? The speed at which Fortune 500 companies grow their sales (or shrink them) determines whether they scurry up the ranks, sink like a stone, or perhaps just stay put.

In 2014, the median revenue growth of a Fortune 500 company was 4.3%. Still, a single year only tells you so much; more impressive are the rocket-ship companies that can boost their sales year after year. To that end, we screened the Fortune 500 to find the companies that had the greatest revenue growth over the past five years, and they are an impressive bunch: To make the cut, they had to average more than 30% annual sales growth for five years straight.

One surprise in this contest? Apple (AAPL) didn’t win. Read on to see which companies did. (You can also use our all-new digital Fortune 500 list to rank this year’s companies by 2014 revenue growth; to do so, click here and sort by “Rev Change.”

It’s not often that a company nearly a half-century old can beat its younger counterparts in a sales race—let alone a conglomerate with disparate subsidiaries, none of them in the technology industry. But over the last five years, Leucadia National (LUK), a holding company that has been likened to a miniature version of Warren Buffett’s Berkshire Hathaway (BRKA), grew its revenues faster than any other Fortune 500 company. The major accelerant was its 2011 purchase of a 79% stake in meat processing company National Beef, now Leucadia’s largest business segment by far. That acquisition alone added $7.5 billion in income to Leucadia’s balance sheet, resulting in a seven-fold jump in revenue in 2012.

Energy Transfer Equity (ETE), a master limited partnership that owns a collection of oil and natural gas pipelines, has also been growing due to a string of acquisitions. For example, after its subsidiary Energy Transfer Partners acquired various additional pipelines, ETE’s revenues increased 185% in 2013, after more than doubling the year before.

The back of an Apple Watch is seen on display at an Apple Store in Berlin April 10, 2015. Consumers flocked to Apple Inc's stores around the world on Friday to get the first close-up look at the tech giant's smartwatch, which the company expects will be its next runaway hit. REUTERS/Stefanie Loos - RTR4WSBV

Apple (AAPL) is only the third-fastest growing company in the Fortune 500 over the last five years, but it has grown a heck of a lot faster than companies that make roughly what Apple makes in sales. After all, it’s hard to grow 12-digit revenues by double-digit percentages. Still, Apple has managed it do so in most recent years, driven in part by the blockbuster launch of the iPad.

The release of the hit tablet computer contributed to a 52% boost in Apple’s sales in 2010, a 66% surge in 2011 (when Mac computer sales also set a new record, and iPhone sales doubled), and a 45% gain in 2012. Growth has slowed down a bit since, as Apple waited to unveil its next new product. Last year, strong sales of new iPhones and Macbooks (which each increased 12%) were offset by declines in sales of iPads (down 5%) and iPods, which dropped 48%, following a 21% decrease in 2013.

Some of the declines can be chalked up to Apple’s new products cannibalizing sales of its old ones; iPod music players’ functions, for example, are pretty much built in to iPhones. But analysts speculated that Apple’s growth may have slowed in 2014 simply because customers were waiting for its next generation of products to finally come out—including the Apple Watch, the company’s first brand new gadget since the iPad. And the hiccup may have been a temporary anomaly: Wall Street expects Apple’s sales to grow a robust 27% in 2015.

Like Leucadia, the fastest-growing Fortune 500 company over the last five years, insurance conglomerate Alleghany (Y) has been compared to Warren Buffett’s Berkshire Hathaway (BRKA). After its revenues declined steadily from 2008 to 2011 due to pressure on insurance premiums that the company receives, Alleghany merged with Transatlantic Holdings, a reinsurance company, in 2012. The merger nearly quintupled Alleghany’s  premiums, resulting in 375% revenue growth that year.

The 2013 bull market (in which the S&P 500 gained 29%) was also good to Blackstone (BX), the asset-management and private equity giant. It was “one of the firm’s best years in terms of investment performance,” CEO Stephen A. Schwarzman said, when he announced that the asset manager’s revenue grew 63% that year, thanks in part to a few successful IPOs of Blackstone portfolio companies. Following strong growth (31%) the prior year, the 2013 surge was enough to propel Blackstone onto the Fortune 500 for the first time in 2014. Still growing fast, the company climbed 18 spots, to No. 373 on this year’s list.

Salesforce (CRM), whose cloud-based software aims to help businesses manage and acquire new customers, has been great at generating sales of its own, and that skill has landed it on the Fortune 500 for the first time this year. It's the most consistent of the fast growers on this list, increasing sales by more than 30% for the last four years straight. That’s a point of pride for Salesforce: Announcing its latest annual earnings—“yet another year of exceptional growth”—CEO Marc Benioff showed some swagger, bragging, “Salesforce reached $5 billion in annual revenue faster than any other enterprise software company and now it's our goal to be the fastest to reach $10 billion.”

Still, that sales growth is slowing slightly: Salesforce predicts a 21% revenue increase for the current fiscal year. (Oh, and the company’s bottom line has been negative since 2011.)

Express Scripts (ESRX) more than doubled its revenue in 2012 by merging with Medco Health Solutions. But its growth slowed to just 10% in 2013 after the pharmacy-benefit manager lost a major customer, insurer UnitedHealth (UNH) (No. 14 on the Fortune 500), which decided to bring all its pharmacy benefit services in-house. That negative impact continued into last year, after ExpressScripts handled the last of its UnitedHealth insurance claims and bid that revenue source goodbye for good. With that loss behind it, however, Express Scripts may be better able to increase its revenue again this year.

Oil refiners’ revenues are largely dependent on the crude price, and that commodity’s volatility often dictates how fast a refiner’s sales rise or fall. HollyFrontier (HFC)is no exception: Its revenues grew 72% in 2010 after a jump in oil prices led to an increase in the refined products Holly sold (because oil companies send more oil to refiners when prices are high) and a 23% increase in the price it sold them for. In 2011, the company’s revenues increased another 86% after its merger with Frontier Oil, which brought in additional sales of crude oil processed at refineries in El Dorado and Wyoming. In more recent years, falling oil prices have had the opposite effect;  the company’s growth flatlined in 2013, and last year, as oil prices fell further last year, HollyFrontier’s average sales price per barrel decreased 5%, accounting for its overall decline in revenues.

Fannie Mae Volunteers build and repair garden and landscaping for the Salvation Army of Alexandria along with Rebuilding Together. The create an outdoor space and community gardens for families living in transitional housing units to enjoy,

Though revenues for the Federal National Mortgage Association (FNMA), a.k.a. Fannie Mae, appear to have grown dramatically over the last five years, don’t be fooled. The increase is almost entirely due to the mortgage financier’s adoption of new accounting standards in 2010; it began including a lot more of its loan assets on its balance sheet, which majorly inflated the interest income it received (to about four times the prior year total). But revenues for the government-sponsored—and bailed out—company have been on the decline since then. Its revenues, which are derived from interest income, fell more than 7% last year as Fannie continued to shrink the size of its retained mortgage portfolio to comply with its bailout agreement with the U.S. Treasury. Meanwhile, Fannie slipped four spots, to No. 17 on the Fortune 500.

Centene (CNC), a provider of Medicaid insurance and other health plans, has been raking in sales lately, thanks in part to the Affordable Care Act as well as to state governments’ increasing interest in keeping their low-income residents healthier. Centene insured 1.2 million more people in 2014 than it did the year before, as the company landed new contracts or expanded existing ones with state Medicaid programs from Florida to Washington. Some of that expansion was funded by the ACA, which offered states money to broaden their Medicaid coverage. But other states—some of which refused the government funding due to political reasons—are expanding their Medicaid programs regardless of Obamacare, further benefiting Centene. And in 2014, the insurer also began participating in the ACA’s health insurance marketplaces in nine states, offering standard individual health plans that meet the law’s requirements. Expecting to insure even more people going forward, Centene is forecasting that its sales will grow by at least 30% in 2015, following 2014’s 49% rise.

Where do airlines buy their fuel? One option is World Fuel Services (INT), which wholesales the commodity to the marine, aviation and land transportation industries. But because the company buys fuel in bulk and then resells it at market price, World Fuel Services makes a lot more money when oil prices go up than when they go down. So while the wholesaler recorded huge jumps in revenue in several of the past five years when oil prices rose (81% sales growth in 2011, for example), it lost its edge as the crude price began collapsing last year. World Fuel made up for the price declines with an increase in orders, just enough to grow revenues 4.4% last year, but as oil prices have plummeted further this year, the company’s revenues are expected to shrink 27% in 2015.