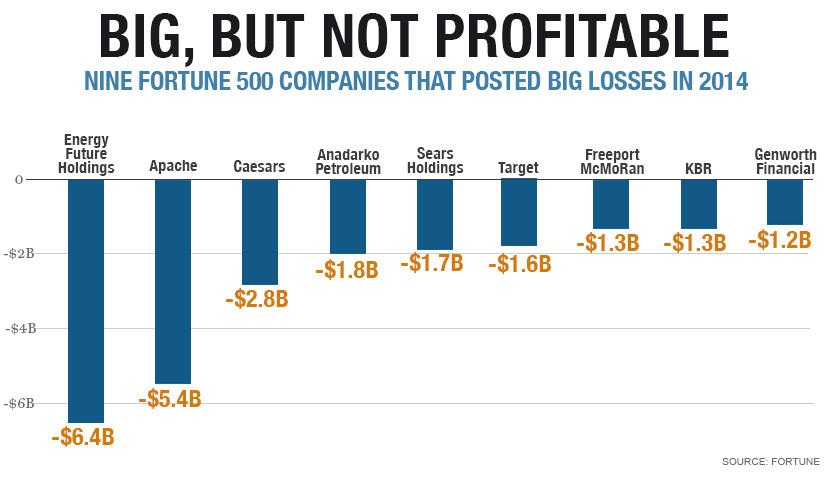 Landing a place in the Fortune 500 means that your company is a big deal: Every company on this year’s list brought in at least $5.1 billion in revenue last year.

But just because a company is huge doesn’t mean it is always profitable. Nine companies on this year’s list lost more than $1 billion in 2014, despite being among the heaviest hitters in terms of revenue. Some of these companies won’t surprise you: There are several energy firms on the list of the Fortune 500’s biggest losers, reflecting the enormous decline in oil prices that occurred in the second half of last year. Others can better be explained by poor managerial decisions, like Target’s ill-advised foray into Canada, which the company pulled the plug on in 2014, taking billions in losses in the process.

This year’s all-new digital edition of the Fortune 500 lets readers sort and filter our list based on dozens of different criteria, including profitability. (You can visit the list here to take a deeper dive into the data.) In the meantime, here are 2014’s nine biggest losers.

Once the subject of the largest leveraged buyout in history, Texas-based Energy Future Holdings has had a rough go of it in the wake of the financial crisis and a revolution in U.S. energy production that sent prices tumbling. The firm filed for bankruptcy in 2014, buckling under the weight of more than $40 billion in debts. That has led its private-equity sponsors, KKR, TPG, and Goldman Sachs, to write down nearly all of the $8 billion they invested back in 2007.

Apache(APA) slashed its rig count by roughly 70% in 2014, in a response to free-falling oil prices in the second half of the year. The company has also had to take big losses related to write-downs of the value of its oil and gas assets, to reflect the lower prices these energy commodities are garnering on the open market. Finally, the firm has been moving to divest itself of assets in places like Egypt and the Gulf of Mexico, to focus more on its onshore North American holdings.

Like its list-mate Energy Future Holdings, Caesars Entertainment(CZR) was the target of one of the largest leveraged buyouts in history just months before the financial crisis struck. The move put a big strain on the gambling giant's balance sheet at a time when it would have benefited from more financial flexibility. Since then, the company has struggled to post profits as its debt load continued to mount. In January, Caesars Entertainment put its largest unit--Caesars Entertainment Operating Co.--into Chapter 11 bankruptcy, setting up a big fight among the firms' many creditors and stakeholders over who will have ownership of the company's many valuable properties. (For an in-depth look at the company's struggles, read this feature from our Fortune 500 issue.)

Anadarko(APC) had more than just collapsing oil prices to contend with in 2014. Last year, the company agreed to pay $5.15 billion to the Environmental Protection Agency as part of a settlement in a suit against an Anadarko subsidiary called Tronox, Inc. The settlement was the largest fine ever levied by the federal government over environmental transgressions, and it was a big contributor to Anadarko's less-than-stellar 2014.

Last year was a bad one for American brick-and-mortar retailers, who have been fighting extreme weather, stagnant incomes and the increased popularity of online shopping. But Sears Holdings(SHLD), operator of Sears department stores and K-Mart, has suffered more than its competitors. The company announced its 11th straight quarterly loss in February 2015, capping off a year in which it completed a spin-off one its best-performing brands, Lands End, as well as shares in Sears Canada, both aimed at bolstering the firm's dwindling cash pile.

Customers shop at a Target store in Seattle, Wash.

When it comes to discount retailing, Target(TGT) is second only to Walmart, the company that tops this year's Fortune 500. Unfortunately for Target, the firm is also following in the steps of its bigger rival in terms of slowing performance in recent years. And 2014 was an especially tough year for the Minneapolis-based firm, as it abandoned its ill-fated Canadian operations, which cost the firm $5.4 billion.

Freeport-McMoran(FCX), the mining and commodities giant, would have had a tough enough time coping with the end of what analysts call the "commodities super-cycle," the tripling of commodity prices that occurred between 2000 and 2011. But the firm also made a big move into the natural gas space with its 2013 acquisition of Plains Exploration & Production Company. The decline in copper prices and even sharper drop in oil prices led the Phoenix-based firm to take big losses in the final quarter of 2014.

The former subsidiary of Halliburton Co. has seen one of its largest sources of profits--wars in Iraq and Afghanistan--wind down in recent years, and this development led the company to embark on a strategic review. KBR(KBR) announced a major restructuring in December which could ultimately cost the firm upwards of $1 billion.

Genworth Financial(GNW), more than any other insurance company, has been hit hard by the unpredicted consequences of an America whose oldest citizens are living much longer than in generations past. The firm was spun off in 2004 by General Electric, but still owns many long-term care insurance policies that were written before that deal was concluded. For Genworth, 2014 was a year of reckoning, as it wrote down the value of many long-term care policies whose costs its underwriting fees can't cover.