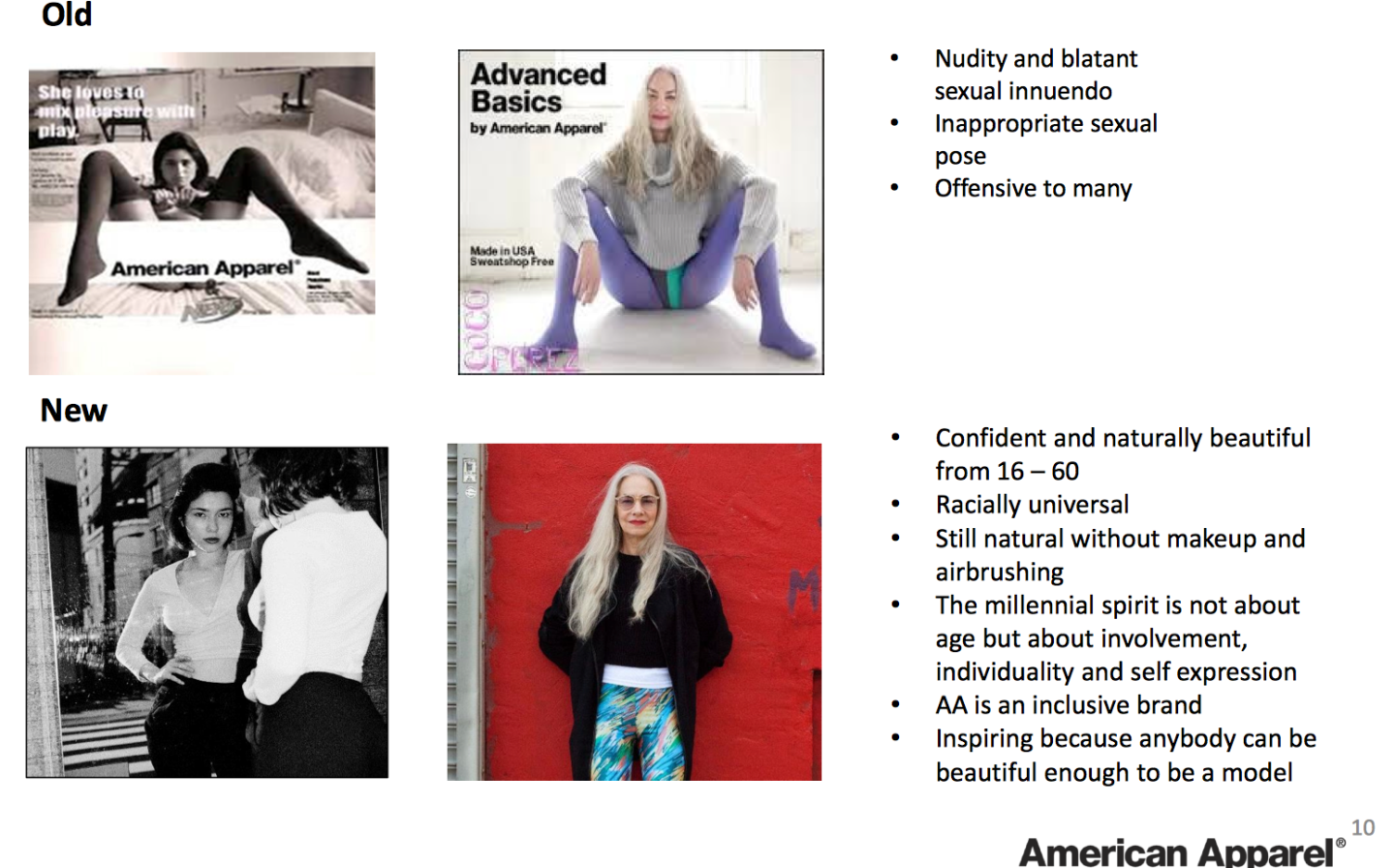 Even as it continues to wage battle with its founder and former CEO Dov Charney, American Apparel has laid out a road map to grow to become a $1 billion brand: a lot less sexual innuendo, and far better merchandise.

The fashion retailer fired Charney last year and has accused him of, among other things, misconduct with employees and mismanaging the company, which saw revenue fall 4% to $609 million in 2014. (When stripping out the effect of new stores or closed stores, the drop was 6%.)

Hedge fund Standard General, which is the retailer’s largest shareholder, has brought in a new senior leadership team, including CEO Paula Schneider, who took the helm in January. The new executives have slammed Charney for offering too many different products, his infamously racy ads, and terrible financial performance. American Apparel’s medium term goal is to get sales to $700-$750 million, and eventually, up to $1 billion.

To get there, American Apparel, which management called “a socially conscious, iconic brand” in a presentation sent this week to investors, is planning to de-sex its ads in favor of more sophisticated campaigns, pare the size of its assortments, and expand in untapped markets so it relies less on cities like New York or L.A. where it’s at saturation. It’s also going for a broader clientele, all the way up to age 60.

In its filing, American Apparel said it plans to “recast the brand in a positive, inclusive, socially conscious light.” That means ditching the “nudity and blatant sexual innuendo” that was its hallmark for years but that was “offensive to many.” The new incarnation of the brand is targeted at the “confident and naturally beautiful from 16 — 60,” and aims to be “racially universal.”

But American Apparel is planning other profound though subtle changes. For one thing, it plans to hire more and new design talent to improve the fit and look of the merchandise. It plans to reduce the variety of items it sells by 30% to get more bang for its buck, and not lose money on products that flop.

The company made it clear how much improvement it thinks it can wring out of American Apparel’s operations: management wants to build the company’s first demand planning and forecasting team (a mainstay at any major retailer), and reduce the time it takes to get to market. (Very crucial when competing with fast fashion chains like H&M.)

As for its stores, big changes are coming too. American Apparel has 242 stores globally. But too many of them are in either New York or Los Angeles, or in cities where there is only one American Apparel, something the company called inefficient. Management is looking to be more deliberate when targeting a market: there has to be 400,000 people or more, and sales of any new store have to be $1.2 million. It also wants a less cluttered look in its stores.

After years of drama, and poor results (no profit since 2009), its new mission is “to be a financially sound, socially conscious, iconic brand that provides high quality American made products to consumers while maximizing stakeholder value.” A lofty, but ambitious plan.