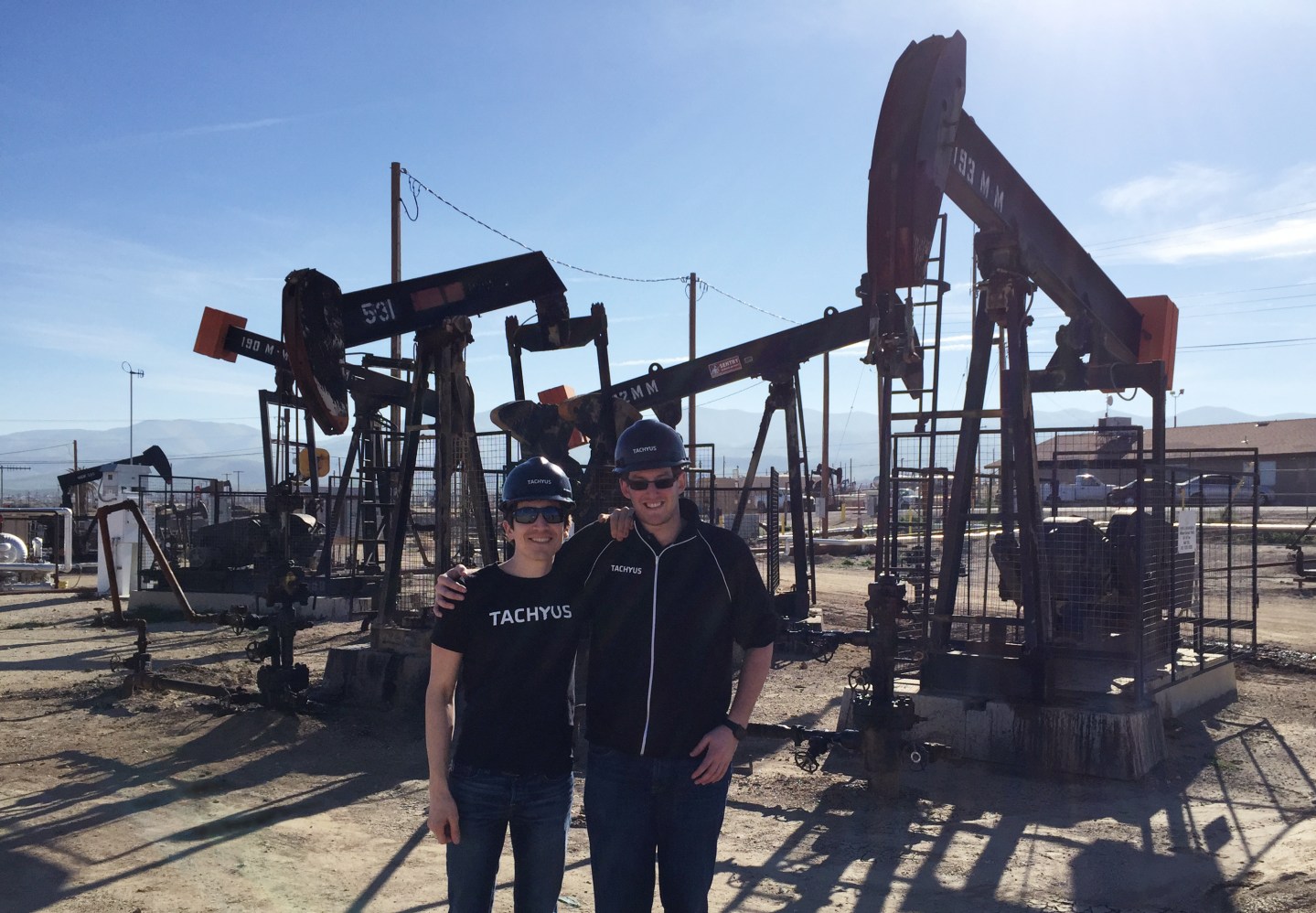 Oil isn’t the most popular industry in the Bay Area, admits Dakin Sloss, co-founder and CEO of Tachyus, an 18-month-old Silicon Valley startup that builds data tools for the oil industry. But Sloss — a serial entrepreneur who graduated from Stanford in 2011 — says “if you care about energy, then you should care about oil and gas. There’s a big opportunity for more data-driven efficiency.”

The startup seems to have hit a nerve initially with oil well operators in the U.S. Sloss says that the company’s data models are being used at 6,000 oil wells domestically helping operators increase their oil production by an average of 20 to 30 percent and enabling Tachyus to grow its revenues around 20 percent week over week. Sloss declined to name the company’s oil operator customers.

Sloss tells Fortune that, following this growth, Tachyus has recently closed on a Series A round of $13 million in funding led by the Founders Fund, the venture capital firm created by former PayPal founders including Peter Thiel. Founders Fund has backed startups like SpaceX, Palantir, Airbnb, Facebook, Lyft, Spotify and Yammer.

Founders Fund originally backed the startup in its $7 million seed round about a year ago. Other investors in the company include Streamlined Ventures, Caffeinated Capital, StartX and Focus.vc. Sloss and his co-founders, Francisco LePort and Paul Orland, spent the first six to nine months of the company’s life working closely with small oil well operators, building the pilot customer tools, which they’ve been commercializing ever since.

Now with this new funding, Tachyus plans to grow its sales operations significantly and expand geographically as well. Sloss says Tachyus, which currently employs about 30 people, has mostly grown through word-of-mouth up to this point.

While the oil industry commonly uses some level of data to analyze and manage oil wells, Sloss says that Tachyus’ tools are the first that combine physics-driven simulations with data-driven models and machine learning. Oil operators can use the Tachyus engine to quickly access predictions and recommendations for how best to get more oil out of their oil wells. Oil wells can be stimulated to produce more oil by injecting water deep down into them.

The Tachyus analytics can determine how best to stimulate a specific oil well, can calculate the optimal water injection rate to stimulate the well, and can predict if there might be equipment mechanical failures at wells across an oil field. The software can also recommend the best place and way to drill new oil wells in an oil field.

For the oil operators it’s all about being more efficient and more profitable. Sloss says that Tachyus can increase their customers’ profitability by a factor of 2.6.

Beyond the oil industry, the startup’s data software could be used in the natural gas industry, too. The shale gas revolution in the U.S. has led to a massive buildout of gas infrastructure, and Tachyus’ analytics could help gas operators better manage gas wells in the face of ultra-low gas prices.

Founders Fund Partner Scott Nolan says that innovation has been desperately needed in the oil and gas industries. “Many industries need to become data-driven,” and the oil and gas sectors are prime examples,” says Nolan.

The Founders Fund only has a handful of energy-focused investments. In addition to Tachyus, the fund has also backed nuclear startup Transatomic Power, solar installer and financier SolarCity, and energy storage startup LightSail Energy. Nolan says the fund has also backed another energy storage startup that is in stealth mode.

While Founders Fund is most well-known for some of its web investments like Facebook and Airbnb, the firm has long maintained that it wants to invest in “difficult problems.” The firm’s former famous mantra is “we wanted flying cars, we got 140 characters.”

Sloss and his co-founders embrace that ambitious ideology. Sloss, who previously co-founded the government data analysis company OpenGov, says the co-founders were looking to build a company that worked in “the physical world,” tackling “a big, hairy problem,” and pursuing “a mission,” that they could get behind.

But in a time when the climate is beginning to warm due to carbon emissions in the atmosphere — and startups in Silicon Valley are more commonly focused on clean energy, energy efficiency, and energy storage — helping the oil industry extract more oil is controversial. Sloss’ response: “Energy powers the world, and fossil fuels are dominant. If we can make them more efficient and safer, then we can directly shape the world’s energy supply.”