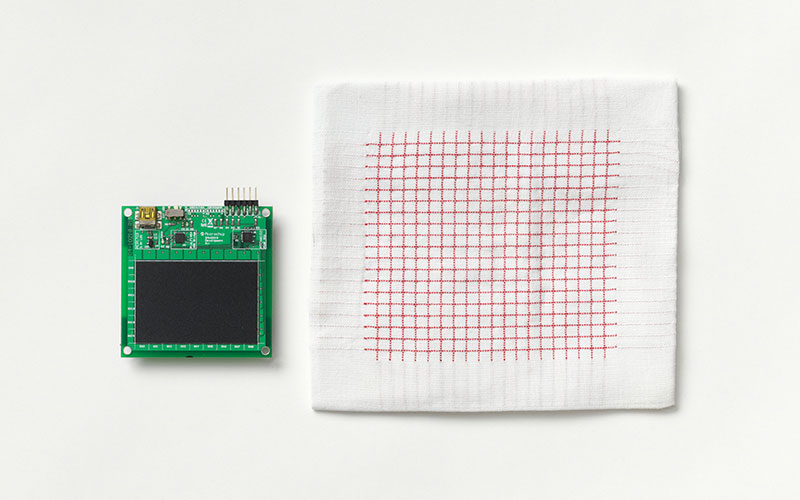 Google is trying its hand at manufacturing high-tech fabrics and wearable electronics that you can actually wear with new Advanced Technology and Projects Group efforts called Project Jacquard and Project Soli. Google showed off the projects, which involve weaving electronics into fabrics and a gesture-based interface, at its Google I/O developer event being held in San Francisco on Friday.

The result of the combined projects is a fabric that acts as a touch screen of sorts. Different ways of stroking the fabric allow could someday allow a user to turn on lights, make a phone call or do any number of tasks programmed for that patch of fabric. Levi Strauss & Co. has signed a partnership with Google to try to exploit the technology. Project Jacquard is a combination of two technologies—weaving conductive threads into a piece of cloth and creating a package of electronics that work with the conductive threads to read the information they convey and turn it into something a computer can understand. For those who like to win on trivia nights, Jacquard is likely named after the first mechanical loom that was able to make complicated fabrics such as brocades.

Google is not the first to create conductive threads. Startups such as OmSignal, Sensoria and others currently sell shirts, running socks and even sports bras that contain such threads and use their electronic innards to track various metrics associated with physical activity. The Sensoria socks are surprisingly comfortable.

But with Project Soli, Google is adding a futuristic tweak. Soli uses radar to “see” tiny gestures that a person might make with their fingers and turns that into a signal a computer can understand. So a flick of the thumb over the fabric could become a screen swipe. Using radar or other forms of radio waves for gesture control isn’t actually all that new. Elliptic Labs, a Norwegian startup has been licensing its ultrasound technology to smart phone manufacturers so people could control their handsets with a flick of their wrist from across the room. Researchers at the University of Washington have used disruptions in Wi-Fi radio signals as a way to build a gesture-based interface for the home.

So Google’s breakthrough with these two projects is to choose radar for Project Soli, and apply it to fabrics to turn anything from your jacket lapel to your sofa cushions into a responsive screen of sorts. This is good news for people who are tired of looking at screens, or are frustrated by trying to perform complex tasks on something the size of a smart watch. But it’s probably bad news for people who like to wipe their hands dry on their pants.