Sundar Pichai: Why Google can afford to be patient 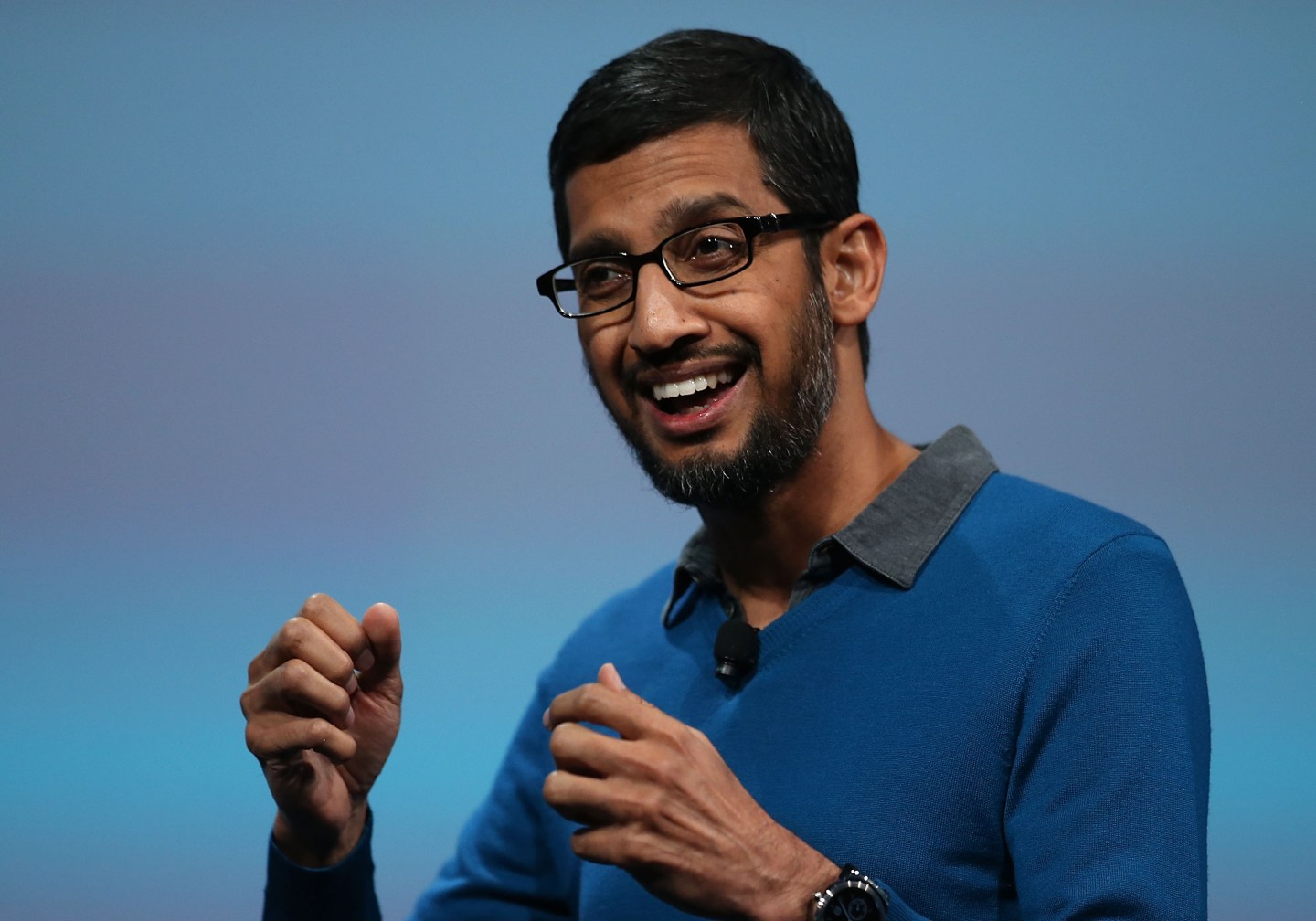 Funny fact about Google I/O, the advertising company’s software developer conference held Thursday at San Francisco’s Moscone Center: The big, bland institutional bathrooms there featured the same thoughtful amenities Google puts in its own quirky, corporate bathrooms. I can’t ever remember going to a massive trade-show-style event and being provided a table with mouthwash, mints, and others sundries to ease the pain of the day.

If there’s a message there, it’s that Google does things its own way. (Even battling halitosis.)

Speaking of doing things its own way, consider that all these years later Google (GOOG) still doesn’t sweat the subject of making money. It helps that it continues to make oodles of cash selling tiny text ads. But just like days of old, when Google bought revenue-less YouTube or offered the awesome but unmonetized Google Earth, the company lards feature after feature on its users with seeming disregard for commerce.

As ever, Google makes such a killing on advertising—including, now, on YouTube—that it just doesn’t have to consider commerce when it doesn’t want to. “The model emerges later,” said Sundar Pichai, Google’s powerful senior vice-president of products and the master of its Android and Chrome software platforms.

“I’ve always been comfortable building in two directions,” he added in an interview following a two-hour-plus keynote presentation to thousands of developers. “First, if we help users get information, a lot of which is inherently commercial, monetization opportunities arise. Second, history always shows that if you build something millions or billions of people end up using, that builds a lot value too.”

Google holds the conference to inform developers who design programs that run on its platforms. It is the search company’s version of Apple’s Worldwide Developers Conference and Facebook’s F8 event. Fortune covered some of the Google event’s highlights here.

Pichai said Google purposely chose to talk about products that consumers use. It could have spoken, he said, about its cloud platform and enterprise apps, both growing businesses. He noted that the company covered “deep learning,” a subject of intense interest in computer-science circles, in two slides.

Breath mints in bathrooms aside, Google hardly is always unique. It showed new fingerprint-recognition technology for Android phones, a feature Apple has standardized on new iPhones. It revealed a mobile-payments product, Android Pay, that looks and sounds like Apple Pay. Said Pichai: “The right moral compass is trying hard to think about what customers want. We try to bring a differentiated approach.”

One such differentiated approach is with its new photos product, a separate app for Android, Apple’s iOS, and the web. The app features stunningly fresh ways to search for, organize, and share photos. For Pichai, it’s a good example of Google offering something it thinks is better, despite plenty of competition. “We are not the first to launch a photos product,” he said. “It’s not even our first photos product.”

The model for doing better, of course, is Gmail. Web mail existed when Gmail came around. But Gmail was superior, and Google eventually sold email to businesses and put ads in its consumer product. “It doesn’t matter to us that somebody had done it before,” said Pichai. With payments, Google is most interested in what the product can do for partners when embedded in their programs, Pichai added, as opposed to being a way for Google to make money. Happy partners lead to profitable partnerships.

As well, when Google needs to spend money it spends money. Offering unlimited free storage for photos and videos will be costly. Yet Pichai compared the expense with what Google’s already has done for years with YouTube, which stores free videos for users. “We project at scale, and we realize Moore’s Law is at work,” he said. “We feel comfortable with how we model it.”

A prominent theme of Google’s various presentations Thursday was making its features available on Apple’s iOS platform. This isn’t new. Google supplied Apple with its mapping product for years before—and after—Apple launched its own inferior product. Not ignoring even confirmed enemies is something of a religion at Google. “It’s something core and to us,” said Pichai. “When we did search we actively made it available to everyone. We want to be a choice to everyone in the world. We ask hard questions: How does it work on Android? How does it work on iOS? Where we can we provide it on other platforms.”

In fact, Google’s embrace of multiple platforms is good business. It wants to be where users are. And if no one else is willing to lead, Google will do so. To illustrate, Pichai referenced the development of the Chrome web browser, which he led. “It’s like running a democracy,” he said. “We influence. This is why we do Nexus devices,” he added, referring to phones and tablets driven by Google. “We do it in an opinionated way. More and more we are guiding. We are announcing developer programs way earlier than we would in the past.”

Google is willing to follow, too. Pichai said the company didn’t anticipate that dual SIM cards in phones would be desirable. But they are in India, where consumers shop for better deals. “This is something we were blind to,” he acknowledged, noting that the news version of Android will have support for dual SIMs.

From a technology perspective, Google is reminiscent of the old line about the British empire, upon which the sun never set. There’s almost nothing Google doesn’t touch—or aspire to touch. And still blessed with the luxury of fat profits, it’s in no hurry to make money on everything it touches either.