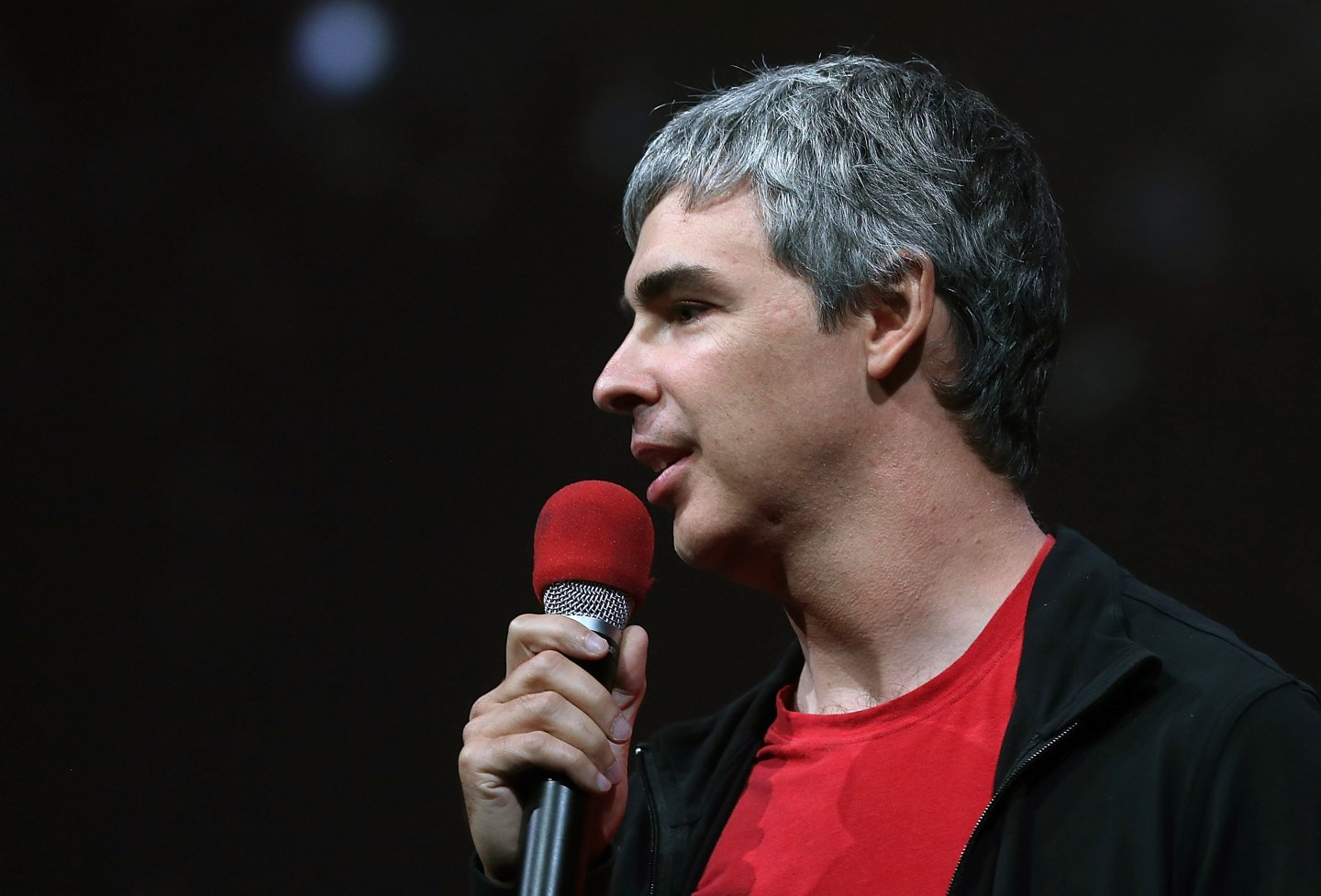 Google Play is growing up.

For years, the search giant’s store for apps, music, books, TV shows, and movies for Android devices has been battling its archrival, Apple’s App Store (APPL). For most of that time, Apple had the clear upper hand. Its head start and avid base of iPhone and iPad owners made it a juggernaut. But now, through perseverance, big investments and focus, Google is catching up by some measures.

From its launch in 2008 though June 2014, Apple’s App Store handled 75 billion downloads. Meanwhile, in a bit of one-upsmanship, Google says it fielded around the 50 billion downloads in just the past 12 months.

On Thursday, at its annual developer conference, Google announced its latest push to make Play a more formidable foil to Apple. The upgrades are just part of the long running war between the tech industry’s biggest companies, whose future success hinges on winning over as many users of mobile devices as possible.

Google’s announcements included a family friendly version of Google Play, in an obvious appeal to parents and children to use Android devices. The new playpen is intended to create a safer environment for young users to find appropriate content absent the sometimes violent video games and risqué dating apps found outside its walls.

Additionally, Google tried to be more loveable to developers by introducing tools that are intended to better help them make money. They included tools to test different app designs, logos and descriptions to see which attract the most users. Google also simplified how developers create ad campaigns to market their apps. Developers will now be able to create and track their campaigns from one place across Google many services like search, YouTube, and even within the Google Play Store.

Of course, the more apps developers build for Android the more desirable Android devices become. In the end, Google wins by guaranteeing that users have easy access to its mobile services and increasingly by taking a cut of the commerce that takes place in the Play store.

Earlier this year, Google’s outgoing Chief Financial Officer, Patrick Pichette, noted that the Google Play store helped to lift the company’s non-advertising revenue 23%. The dollars involved are not much next to the company’s gargantuan ad business, but his point was that the store is potential source of future growth.

Play is riding the wave of Android’s dominance in the smartphone market. One billion Android phones and tablets were sold in 2014, up from 780 million in 2013, according to researcher Strategy Analytics.

As part of today’s announcement, Google is introducing a new area of the Play store that is entirely devoted to apps, games and content for children and young adults. Before, children had no dedicated section.

Although Google is bragging about the family friendly section, it is, in reality, playing catch up. Apple already has a kids section in both iTunes, for TV and movie content, and within the App Store.

But Google is hoping to differentiate itself by filling its family area — accessible through a “family” button on the Play homepage — with more detailed information. Users can search for games and apps by categories like age or popular characters such as Disney’s Frozen and Nickelodeon’s Dora the Explorer. Descriptions tell whether the apps include ads, the ability to buy something, or reveal the user’s location. Parents will be able to set password-protected filters within the Play Store to limit the types of content their children can see.

Google has been open about its ambitions to roll out for kid-friendly versions of its most popular services. Earlier this year, it revealed a dedicated children’s app for YouTube.

“This is part of Google’s effort to include more within the experience for parents and families,” said Eunice Kim, senior product manager for Google Play.

Matthew Evans, senior vice president of digital for cable broadcaster Nickelodeon, praised the new family area as a “great evolution” for the Play store and a big help in building a better relationship with viewers. Many of them already use Android devices, he emphasized, so it makes sense to give them more of his television company’s content.

“There are so many apps out there, and as more and more developers create content, we have found that creating a curated experience leads to more consumers seeing the content,” Evans said.

Google’s focus on family apps follows a push that started in January to tweak how content Play is rated. Originally, the company let developers rate their own apps for children. But self-policing system had big holes. In April, Google introduced a new program for developers to get an additional review from an outsider to get their apps labeled “family-friendly.” Google recently enlisted the International Age Rating Coalition to set the ratings standards for apps based on localized laws, and cultures.

Beyond family friendly content, Google (GOOG) wants to make it easier for its Play users to find apps among the millions available. A new feature called guided search is intended to help by segmenting certain results into different categories. For example, someone who searches for “photography” in the Play store will get results that are grouped into topics like camera apps, collage makers, and editing apps. In the future, Google plans to expand guided search into other categories including finance and shopping apps.

At the same time, Google is trying to woo developers to build more apps for Android. Their perennial frustration is attracting users, a problem Google is trying to solve by creating its universal ad campaigns. No longer do developers need to create separate marketing campaigns across various areas like search, YouTube and for mobile apps. They can do it all in one place.

Additionally, Google is giving developers more data about the ad campaigns. They will be able to see, for example, whether new users arrive organically or through ads. Developers will also be able to test multiple versions of their app listings to see which graphics, text, and prices attract the most traffic and downloads. In a pilot program, some developers who tweaked their Play store apps based on the new data saw double-digit increases in the number of people installing their apps, Google says.

“The theme here is we want to help developers have more business success,” said Ellie Powers, a product manager for Google Play.

Still, Google lags behind Apple in the amount of money it has paid to developers over the years. Google has doled out $7 billion while Apple has shelled out $10 billion.

Rob Oshima, vice president of business development for mobile game developer Kabam, says the company develops games for Android because that’s where the users are. Some of the game developer’s titles on Android generate more revenue than through Apple, he said.

Despite user and download growth, it’s still unclear how much revenue Google Play brings in and how that compares to the Apple App Store. Neither company breaks out those numbers.

App Annie, a company that tracks app store sales, recently estimated that Apple’s App Store’s first quarter revenue was about 70% higher than Google Play. That marked an increase from 60% in the third quarter of last year, signaling the gap is widening — likely because of Apple’s fast growth in China.

The irony is that Android phones are big sellers in China too. But because of complications involving censorship and security, many Google services are unavailable to Chinese consumers.

Jamie Rosenberg, chief of Play, declined to share much more on Play’s China expansion or any negotiations between his company and the government there. But he did add that the Play team recently started letting Chinese developers sell apps on Play outside of China.

But some data points to Play’s revenue potentially growing. App Annie also released a report Thursday reporting that Google Play revenue from apps, music and more grew even faster than downloads at 40%, largely due to growth in established markets (especially the US, South Korea, and Japan). Revenue from paid downloads of games, in particular, have jumped 50% year over year, according to the report.

One of Google Play’s other challenges is fragmentation of Android devices. Unlike Apple, Google’s Android comes in different versions depending on the device’s manufacturer, type of microchip used and screen size.

“It’s always going to be more challenging for developers to create a great app experience on Android because of that fragmentation,” explains Julie Ask, analyst at Forrester Research.

Despite these challenges, Google continues to invest in making Play a destination for all kinds of mobile content. TV shows and movies are near the top of the list.

A turning point for the Play store came with the now infamous Sony cyber hacks late last year and the leaking of the studio’s movie, The Interview. During the week before Christmas, Rosenberg said that Sony Entertainment CEO Michael Lynton contacted Google Chairman Eric Schmidt about distributing The Interview through Google Play and YouTube.

Releasing the film, which parodied North Korean leader Kim Jong-un, came with big risks because of threats made by the hackers. But Google felt strongly that the move should not be censored, says Rosenberg. A week later, Google made the film available for rent on Play and YouTube, marking what Rosenberg described as a milestone for the company. Google Play ended up being one of the first distributors for the film.

Ask, the analyst, said that Google still isn’t really a leader in professional video content. But she says the company may make a more concerted effort and start buying and producing original content to help Play make more attractive.

Rosenberg signaled that Google is, indeed, getting more interest from studios. Instead of Google making the initial approach, the studios are calling it with ideas. For example, with the ending of the hit series Mad Men, Google Play introduced a destination called the “The Mad Men Experience” with AMC that included exclusive content and cast interviews.

For Google Play, the future depends on getting more users and high-quality content onto the platform. Although Apple’s ecosystem is still king in many users’ minds, Ask argued, Google shouldn’t be counted out.

“Nothing is forever and no one’s position or lead is guaranteed,” she said.

For Rosenberg, the future comes down to developers and relevance.

“The role Play will play will evolve as Android evolves as a platform,” Rosenberg said. “We have a good sense of things we still want to do and the ways we still want to grow, and how to be more relevant to consumers around the world.”