How Danone gets the right bacteria in your yogurt 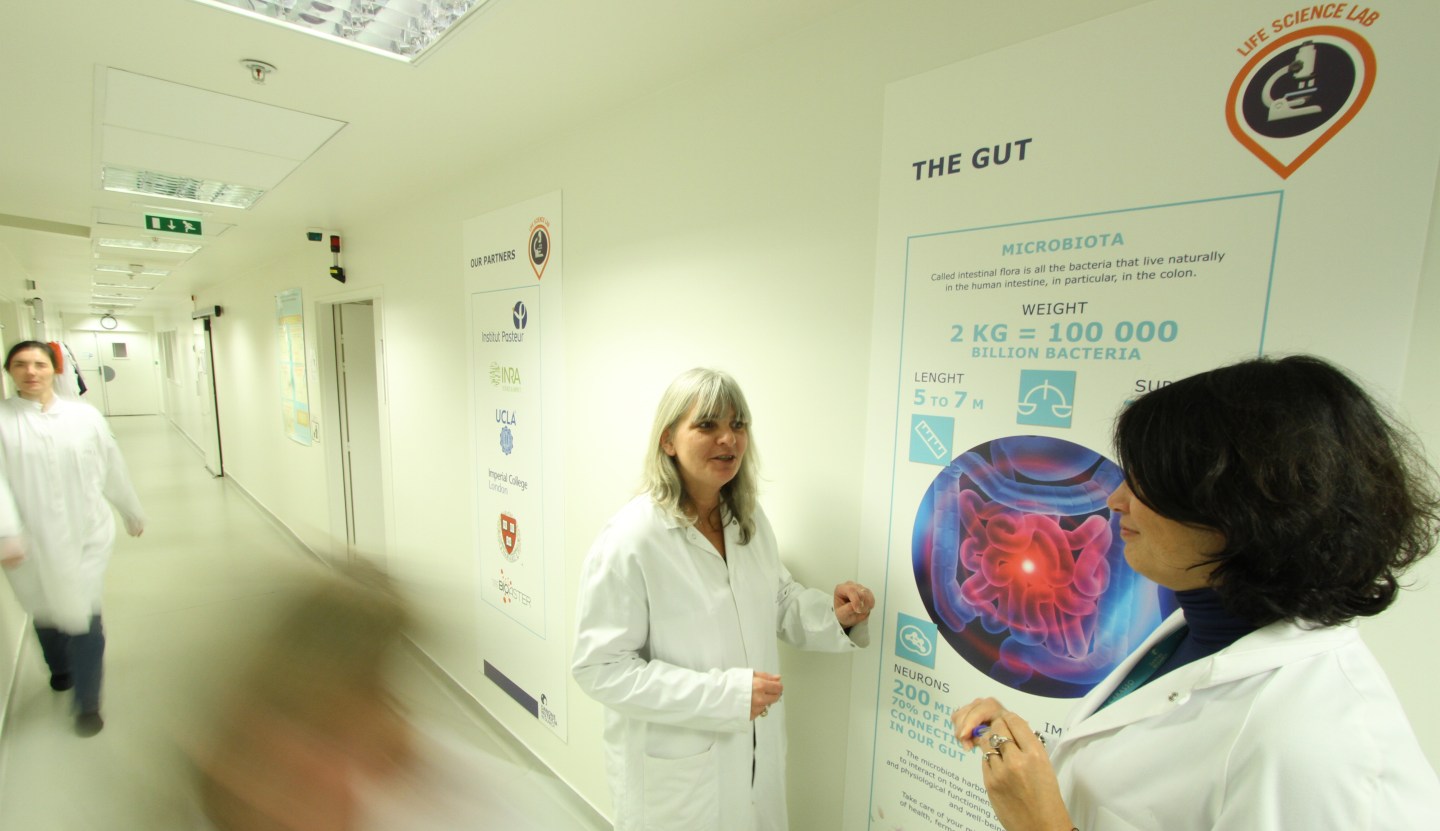 Danone, the $28 billion French dairy maker, has been making yogurt for nearly a century. First sold in Spanish pharmacies as a medicine for children with intestinal disorders, Danone, the world’s largest yogurt producer now sells it in grocery stores around the globe (and under the Dannon brand in the U.S.).

The ascent of the humble, fermented milk product has been just as impressive: yogurt—now sold every which way—has become an $86 billion commercial food category. And that’s a figure that’s bound to get bigger if food companies like Danone succeed in optimizing it for the human microbiome—the 4.4 pounds of microorganisms that live, largely, in our guts and contribute, in a number of ways, to human health. See our feature story on the corporate race to feed the microbiome here.

How does it work? Danone’s Director of Microbiology & Biotechnology, Sophie Legrain-Raspaud, walked Fortune through the art and science of the company’s cutting-edge efforts to develop a new generation of good-for-your-gut yogurts.

“Yogurt is made by two bacteria—Streptococcus thermophilus and Lactobacillus bulgaricus. When they’re together, there is symbiosis. If you have only one of them, you don’t get anything. But if you put them together, they are a good couple—they work quite well together and perform fermentation.

“But Lactobacillus bulgaricus is a whole family of bacteria. There are many different individuals in that family—and they’re all a little bit different. If we want to play with the taste or texture of yogurt—in Europe, we have different tastes than in the U.S., or in Asia—we’ll play with different members of the family. We have a collection of more than 4,000 different bacteria in this freezer. We have a big, big playground here.”

“We also look for health effects in these bacteria. Say I want to have a beneficial effect on digestion. We have scientists who hypothesize what sort of properties the bacteria should have, and then we’ll test 100 different bacteria for those properties —you never know in advance. Hopefully, you’ll see something interesting in one or two bacteria.

“We do these tests in the lab, or in vitro. We’ll check ‘does this bacteria produce certain metabolites?’ The bacteria talk a lot with each other because of specific production of metabolites— their language is related to chemicals. We do this to 100 different bacteria. We also check to see if the bacteria is safe and whether it’s able to grow in milk.”

Step three: Make it a food

“Then we start to develop the first prototype of yogurt. In a product, you have at least two different kinds of bacteria, but if you want to have a health effect, you’ll have at least three. We test to see if each bacteria grows well with the others, and if it’s able to survive in the product. Bacteria is a live element—not an ingredient—and so you have to follow it during the product’s shelf life. That’s a challenge—bacteria are microscopic and not so different. Even at microscopic level it’s difficult to tell them apart. You also have to know exactly what number of bacteria you have in the yogurt, so for each bacteria, you need to develop specific tests to numerate and make sure we have the right amount of bacteria in the product. We want to see how many are alive, how many are stressed, which means they’re not in a good condition to grow. This is classic microbiology. We use different kind of chemicals that help us target the right bacteria and learn what physiological state they’re in.”

“Once the product is ready, we want to know—especially with a probiotic product—does it survive the GI tract and go to the gut to interact with the microbiota, or the bacteria in the gut? We have developed in vitro tests: we look at each bacteria in a simplistic model to see if it’s able to survive the stomach, which is very acidic—it’s a big, big stress on bacteria, many die there—and in the intestine. We use things related to saliva and chemicals in the stomach to simulate the human condition. It’s not perfect, but a first check. Why do we want to see if bacteria arrive alive in the gut? Because we want communication between the bacteria there.

“Our interest is not just the product, but the impact it will have on specific parameters of health, so we also do work on the microbiota. To do this, we have a colonic gas model, which mimics the human colon. We use bacteria from biological samples (stool) and use it reproduce what happens to the yogurt’s bacteria in the colon. We measure the metabolites and gas produced. Depending on the microbiota you have, you’ll react differently. We test different kinds of samples—adults and babies, but even adults won’t have the same microbiota.

“We also work on the enteric nervous system. In your gut you have a lot of nerves—as many nerve cells as in the brain of a dog. The fact is that there’s a big relationship between your gut and your brain.

“The tools we had in the past didn’t allow us to study this. We developed these tools 5 years ago—they’re relatively unique and they’ve been validated for only a year and a half, meaning we can trust the results. It’s a relatively young science, but this is how we can start to analyze and understand the microbiome.

“Now we’re doing clinical studies to check what is the real alignment between these in vitro tests and the reality. In the end, what we’re interested in is not the microbiota, but the health of the host.”