What the Blackberry guys said when they saw Apple’s iPhone 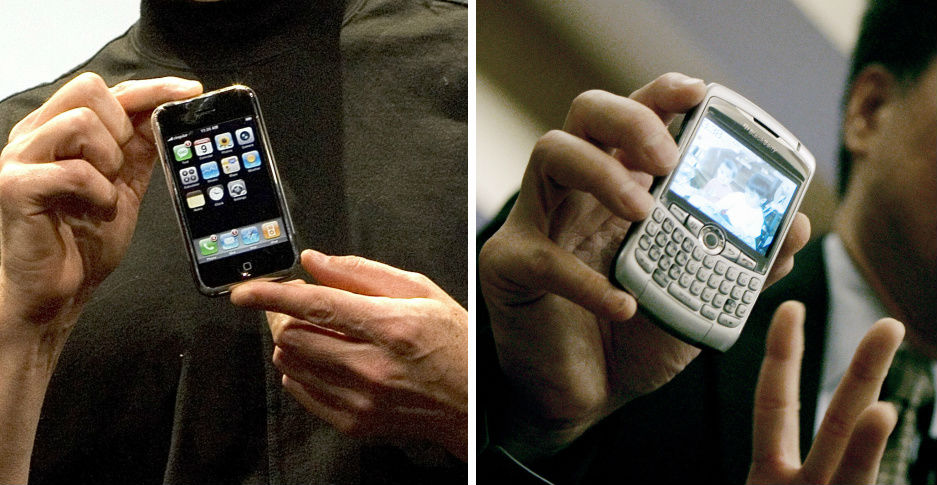 According to Jacquie McNish and Sean Silcoff, that’s what Research in Motion founder Mike Lazaridis thought when he first saw Steve Jobs downloading music, videos and maps onto a small glass object he called the iPhone.

“It’s going to collapse the network,” Lazaridis said to himself when he learned that Cingular Wireless (now AT&T) had signed an exclusive contract to provide cellular service to the thing.

“I want you to watch this ,” he told his co-CEO Jim Balsillie. “These guys are really, really good.”

The first iPhone wasn’t perceived as a threat to BlackBerry’s core business. “It wasn’t secure,” says a top lieutenant. “It had rapid battery drain and a lousy keyboard.”

Like many established companies faced with a disruptive innovation, BlackBerry doubled down. And lost.

McNish and Silcoff’s LOSING THE SIGNAL: The Untold Story Behind the Extraordinary Rise and Spectacular Fall of BlackBerry is due out tomorrow. It was condensed, adapted and excerpted last week in the Wall Street Journal.