Spain veers left, and toward uncharted territory, in elections 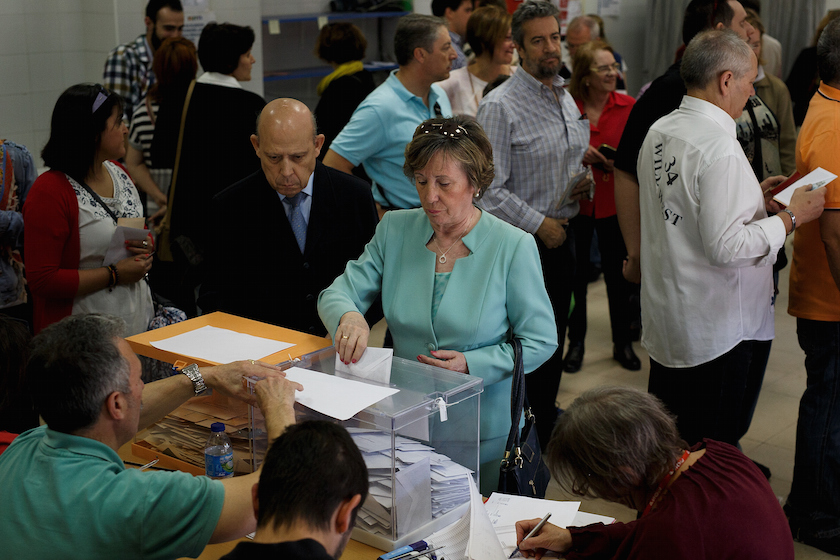 MADRID, SPAIN - MAY 24: A woman casts her votes at a polling station on May 24, 2015 in Madrid, Spain. Spaniards are going to the polls today to vote for mayors and presidents of regional government where new political parties such as 'Podemos' (We Can) and 'Ciudadanos' (Citizens) will face their first test across the country ahead of General Elections by the end of November. (Photo by Pablo Blazquez Dominguez/Getty Images)
Photograph by Pablo Blazquez Dominguez—Getty Images

Barcelona’s plentiful sun and Mediterranean breezes gave election Sunday a lazy, unexceptional air. Walking through the central square of the comfortable Sarrià neighborhood, Margarita Tomás said that after seven years of an economic crisis marked by high unemployment and political corruption cases, voters were ready for new faces. But she didn’t expect a major upending of the current order.

“There’s a lot of anger in Spain,” she said. “But there won’t be a giant revolution. It will be more of an intermediate step.”

Reading a newspaper outside her clothing boutique in the seafront neighborhood of Vila Olímpica, María Sánchez wasn’t even sure the upheaval would go that far. “Nothing is going to change,” she said.

What happens over the next few months will determine whether either is right. In a historic blow to the two-party system that has ruled Spain since its transition to democracy almost four decades ago, voters on Sunday put candidates supported by the new left-wing party Podemos (We Can, in English) on the verge of the mayoralty in Madrid and Barcelona, the country’s two largest cities.

In the regional and municipal elections, which served as a dry run for the national elections expected in December, the conservative Partido Popular (PP) of Prime Minister Mariano Rajoy lost its outright majority in much of the country, as young voters flocked to Podemos and another new party, center-right Ciudadanos (Citizens, in English).

Although the PP is still the largest party in Spain, it saw its total portion of the vote drop from 37.5% in 2011 to 27% this year. The other historic party, the center-left PSOE, which lost the government and much of its support in 2011, saw its share drop from 27.8% to 25% over the same period.

What comes next is uncharted territory. Spain does not have direct elections for mayors or governors; instead, voters support a party and each city and region is headed by a local or regional prime minister.

This system rarely presented difficulties in the past, as one party usually had an outright majority (or close to it) in city hall or the regional parliament. That allowed the winning party to choose the prime minister from its ranks. Now, however, the fragmented political environment requires parties to form coalitions or allow the leading vote-getter to rule with a minority government.

“This is a new game. There is no culture of coalition-making and this is going to be a problem,” says Antonio Barroso, a Eurozone analyst at Teneo Intelligence.

The experience of the Podemos-supported candidates in Madrid and Barcelona offer a microcosm of Spanish politics today.

In Spain’s capital, the PP was the most-voted party, with about 34.6% of the vote. But it is likely that the second and third vote-getters – Podemos-supported Ahora Madrid and the PSOE – will form a coalition to install Ahora Madrid’s candidate, former Supreme Court judge Manuela Carmena, as mayor of Madrid.

Barcelona’s fragmented panorama is much more complicated. Anti-eviction housing activist Ada Colau is almost certain to be the next mayor after her party, Podemos-backed Barcelona en Comú, received the most votes.

The issue is that her party received only 25.2% of the vote for 11 of the 41 seats in city hall. To get to the 21-vote majority needed to pass legislation, she will have to attract the votes of several other parties.

“I think Madrid will work relatively okay. I’m more worried about Colau,” says Antonio Roldán, a political risk analyst at the Eurasia Group. “To do anything, you will always need four parties. It will be a disaster. It will be a horribly difficult coalition.”

And then, of course, there is the matter of the secession in Catalonia. The loss of Barcelona – the presumptive capital of an independent Catalonia – to a party that is tepid on secession is a setback for the movement.

“It’s going to be hard to justify going forward when you have a party that is against independence running the main city,” says Roldán.

At the same time, however, pro-secession parties in Catalonia saw their total share of votes in the region go from 38% in 2011 to 45% yesterday, with all of the growth coming in left-wing parties.

Overall, the election results show dissatisfaction with Spain’s traditional parties and a leftward move among younger voters. In its most recent voter poll, the national polling agency, Centro de Investigaciones Sociológicas (CIS), found single- digit support for the PP among voters under 35, far below the PSOE and Podemos. Podemos outpolled both the PP and PSOE among all voters under 45.

Whether this trend will repeat in the national elections is difficult to discern, Barroso notes, as voters who are willing to support a radical local Podemos candidate might be more restrained when they vote on national offices. And Prime Minister Rajoy and the PP are betting that improving employment and GDP data will buoy them ahead of national elections.

For now, though, it appears that Spanish politics are going through a major renovation. “The long term is actually positive because it shakes up the political system, and Spain is badly in need of a shake-up,” says Barroso.

But will the shake-up last?

“We’ll have to see,” says Margarita Tomás, “if the new parties are going to steal like the old ones.”