The bureaucrat who has tech terrified 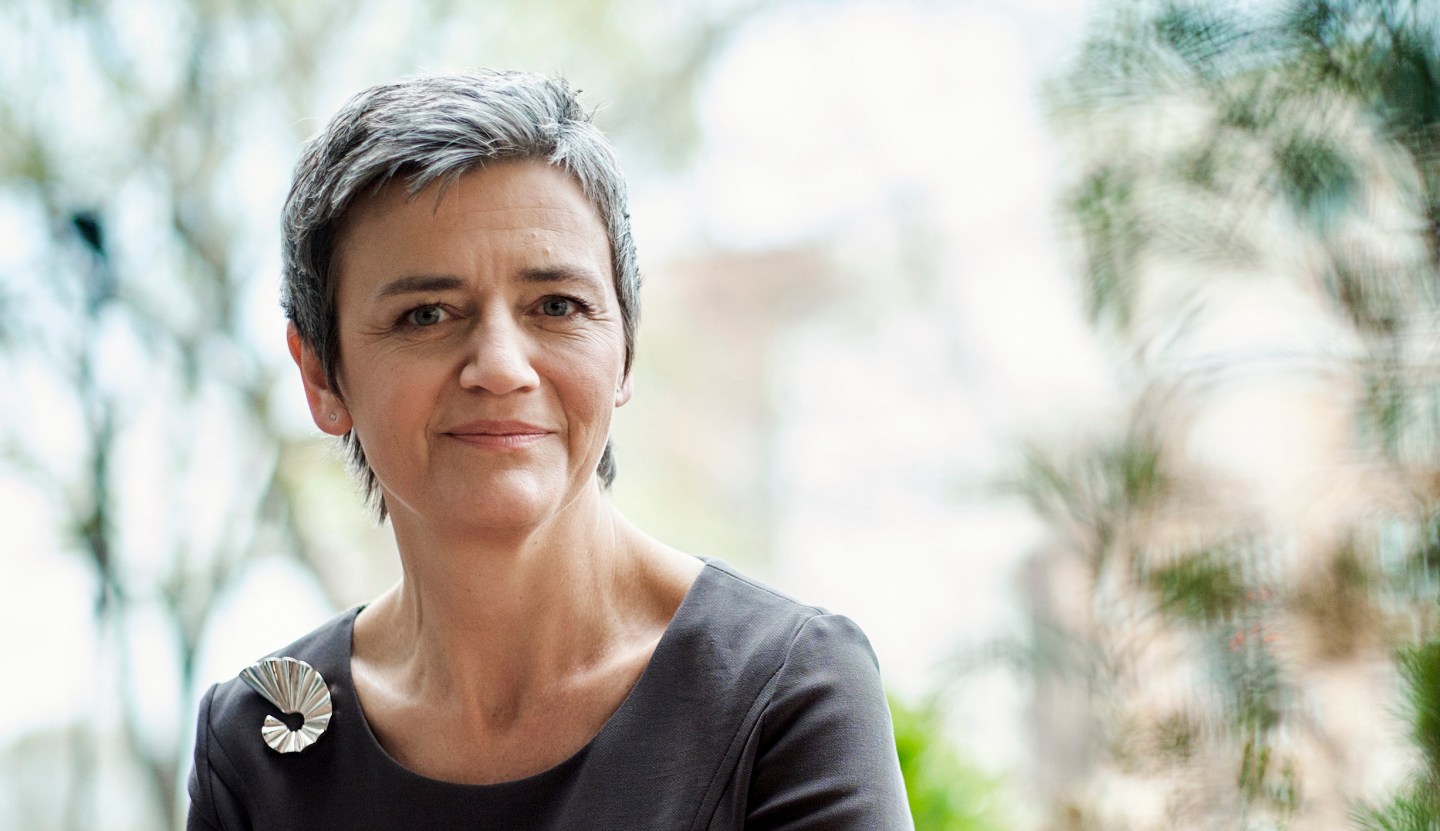 -- PHOTO MOVED IN ADVANCE AND NOT FOR USE - ONLINE OR IN PRINT - BEFORE SUNDAY, APRIL 19, 2015. -- Margrethe Vestager, the European Union?s commissioner for competition, in Washington, April 16, 2015. In Brussels last Wednesday, she filed formal antitrust charges against Google, saying the search engine giant had abused its market dominance by systematically favoring its own comparison shopping service over those of its rivals. (T.J. Kirkpatrick/The New York Times)
T.J. kirkpatrick—Redux

It’s early evening and Margrethe Vestager is sitting in her Brussels office sipping coffee, talking about her now famous antitrust campaigns against some of the world’s largest businesses. “If you want to eat an elephant, you need a strategy,” she says from her elegant perch surrounded by modern Danish paintings. “If you try to do it in one bite, you will choke on it.”

The tasks Vestager has set for herself as Europe’s new competition commissioner are nothing if not elephantine. In just six months on the job, the antitrust chief has fired salvos at some of the world’s most powerful corporations in a series of cases that could cost the companies billions. In April she charged Google for allegedly ­elbowing out competitors of its shopping site, and Russia’s Gazprom for locking in high prices in EU markets. Both companies are preparing rebuttals. Now Vestager is weighing challenges to GE’s (GE) $14 billion deal to buy France’s Alstom, as well as telecom acquisitions in both her native Denmark and Britain.

So far her bite-by-bite strategy, say old Brussels hands, has been masterful. Take the case against Google: Vestager shelved years of EU probing and zeroed in on one issue—online shopping—determined to make it stick in court. If she wins, more cases, including complaints against Google’s travel and map sites, could follow. That tactic may provide a blueprint for her next moves, as Vestager picks up more battles against global behemoths—a load she says her staff of 900 is well equipped to handle. Vestager says she moves against companies only when she is certain she can win. Perhaps for that reason she delayed any action on possible tax-avoidance charges against Apple (AAPL), Amazon, Starbucks (SBUX), and Fiat. She isn’t expected to put it off forever.

For executives, all this means Brussels is suddenly a place worth visiting. Amazon (AMZN), Facebook (FB), Google (GOOG), and others have begun spending millions lobbying politicians in the city. Google more than doubled its lobbying budget for Brussels last year, and Amazon’s bill rose about 20%, according to the Corporate Europe Observatory, which tracks lobbyists in Brussels. Since reporting is voluntary for companies, analysts believe the real lobbying spike is steeper and is likely to rise faster still, given Vestager’s willingness to act against companies. “Past commissioners were easier for companies to influence,” says Olivier Hoedeman of the Observatory. “Vestager isn’t afraid of tackling controversial charges.”

Partially as a result of the nervousness she inspires in the corporate world, she’s taken pains to communicate with businesses. In May, Fortune sat in on a closed-door lunch in Brussels with Vestager and a group of prominent executives, many from the U.S.  Over two hours of polite grilling, Vestager assured them she was neither anti-American nor anti-globalization, a message she stressed during a visit to Washington and New York in April. “We’re doing our best for law-abiding businesses,” she told the execs in the ornate, wood-paneled dining room. “It would be unforgivable if enforcement tools were used for political reasons.”

Yet politics is Brussels’ lifeblood. And within Google, some suspect Vestager is under pressure to act, largely from the EU’s new digital-economy commissioner, Günther Oettinger. Oettinger has criticized U.S. tech’s dominance in Europe, and his plans to boost EU business could well clash with Vestager’s fierce consumer-protection instincts. “She’s not easily seduced by power or wealth,” says Thomas Vinje, a Clifford Chance attorney for smaller U.S. tech firms. “Quite the opposite.” In her office, the commissioner says she is keeping a “truly open mind. We should be able to listen and see where we agree and disagree.”

Meanwhile, she’ll keep eating that elephant, one bite at a time.