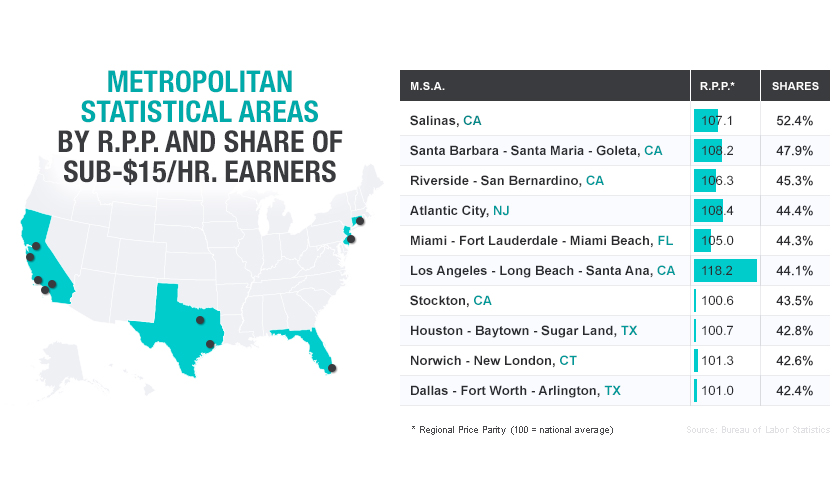 The Los Angeles City Council this week voted 14-1 to pass a $15 minimum wage for the city. The hike, which will go into effect over the next five years, further solidifies the $15 minimum as the new national standard.

New York City seems poised to follow suit. This month, New York Governor Andrew Cuomo announced plans to convene a panel to consider a wage increase for the fast-food industry, a change that can become law without a vote in the legislature.

There are plenty of arguments against this high of a minimum wage, including one made by Berkshire Hathaway CEO Warren Buffett on Friday, in which he called for an expanded earned income tax credit rather than a $15 per hour wage. But like it or not, the $15 per hour train is gaining steam. It had already made stops in Seattle and San Francisco before pulling into L.A. Should others follow suit? That question prompted Fortune to examine which U.S. city residents would benefit the most from a $15 per hour minimum wage. We asked David Cooper, an economic analyst at the Economic Policy Institute, for help.

We first wanted to determine which cities had the largest share of sub-$15 per hour earners, where a minimum wage boost to $15 would presumably have the biggest direct effect, not in absolute numbers but by percentage of the working population. (One caveat here: we used the Bureau of Labor Statistics’ data for metropolitan statistical areas—geographical areas with high population density and consistent economies that don’t necessarily contain just one city and might reach beyond a city’s official limits.)

It turns out that there are plenty of metropolitan areas—especially in the South—where 45%, 50%, and even 55% of the working population earn less than $15 per hour. (Another caveat, because of the size of some of these areas, some percentages have margins of error up to 4.3%.) For example, in the part of Texas that encompasses McAllen, Edinburg, and Pharr, which is located in the state’s southeast corner near the Mexican border, just over 68% of its workforce earns less than $15 per hour.

But when you examine how much it costs to live in that region—which Cooper measured using regional price parity, the price of goods and services in that area versus the national average—you get a different picture. The RPP there is 85, on a scale where the overall national RPP is equal to 100, which means goods and services in that area are cheaper than the national average. To take that factor into account, we looked at the most expensive places to live, as measured by RPP, and used the U.S.’s average share of sub-$15 per hour earners—42.4%—as a cutoff for the share of low-wage workers.

The map above shows the metropolitan areas that turned up. L.A., which will soon have a $15 per hour minimum wage when Mayor Eric Garcetti signs the recently passed measure into law, makes the list. It’s one of five California areas in the top 10.

The list picks up on the fact that there’s “greater inequality in cities where there’s a high cost of living and where wages are low,” says Chris Tilly, director of the UCLA Institute for Research on Labor and Employment.

In the old, rust belt wage structure, there was a healthy population of middle wage income earners. Men worked in manufacturing; women held clerical jobs. But the bottom has dropped out of the middle class, in part, because of the reduction in traditional manufacturing jobs. As cities begin to orient themselves to newer, techonology-driven economies, there’s very little middle ground. You either work in high tech (engineers, etc.,) and its ecosystem (lawyers, accountants) or you’re left at the bottom, Tilly says. Cities with large immigrant populations also tend to have a wide disconnect between the cost of living and wages.

Missing from this list is, notably, New York City. The metropolitan statistical area that includes New York (plus parts of New Jersey and Long Island) has the second highest regional price parity on our list—122.2, behind only Honolulu’s 122.9. But the New York area’s share of sub-$15 per hour workers is 36%, considerably lower than the the national average of 42.4%. Then again, with a national average as high as 42.4%, it sounds like there’s plenty of room for improvement all across the U.S.