Big Tobacco is suing the U.K. over plain packaging law 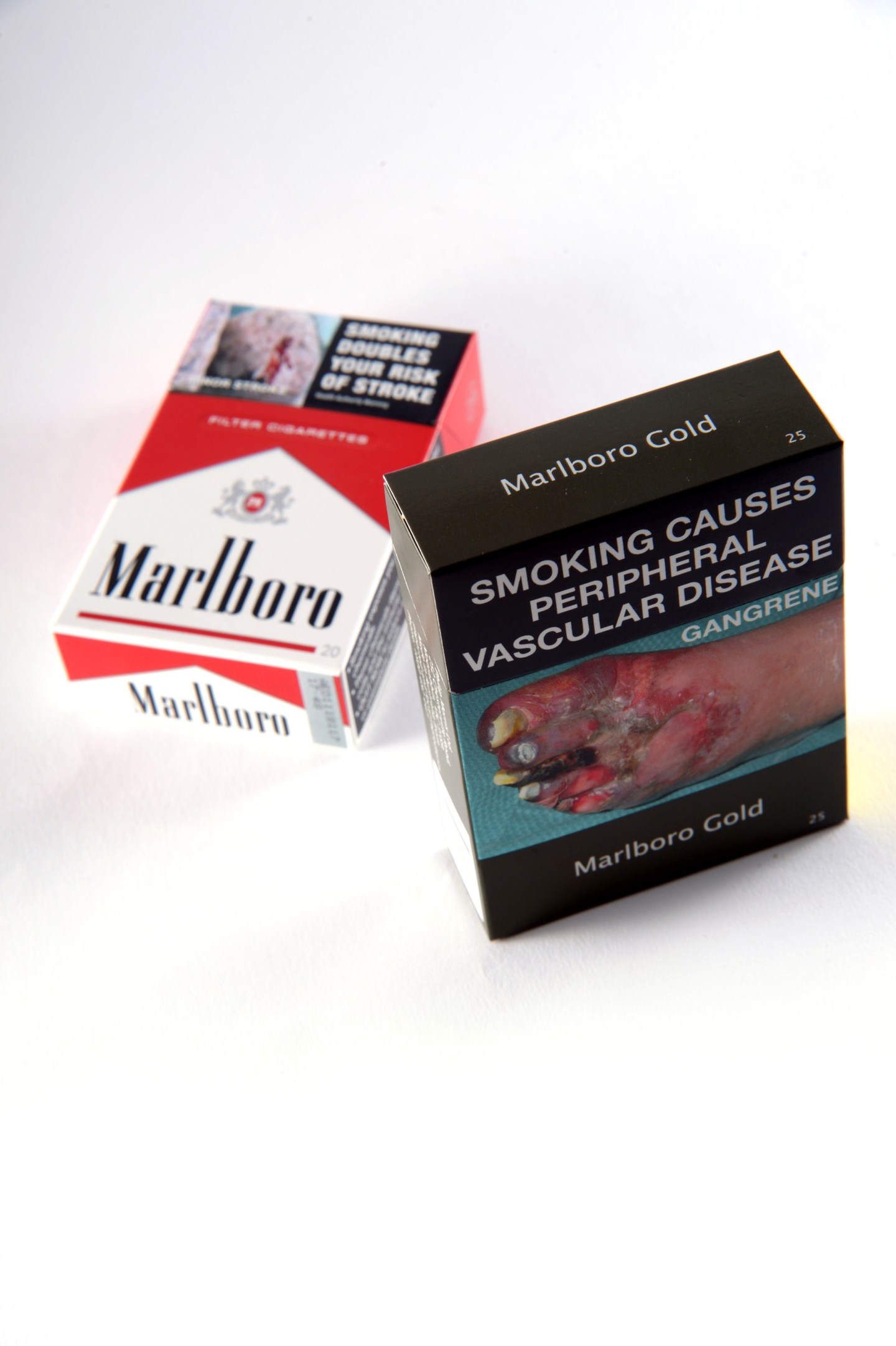 A pack of Philip Morris International Inc. Marlboro Gold cigarettes in the new packaging, right, and Marlboro Red cigarettes in the old packaging are arranged for a photograph in Melbourne, Australia, on Monday, Oct. 1, 2012. Tobacco products complying with the world?s first plain-packaging laws have started arriving in stores, as an Oct. 1 manufacturing ban on the country's A$10 billion ($10 billion) tobacco industry comes into force. Photographer: Carla Gottgens/Bloomberg via Getty Images
Photograph by Carla Gottgens — Bloomberg via Getty Images

Two of the world’s largest tobacco companies have filed suit against the British government in an effort to overturn new laws aimed at stamping out the use of cigarettes.

Philip Morris International (PM), which owns the rights to brands such as Marlboro, said the new legislation on plain packaging illegally deprived it of its trademarks without compensation, by banning the use of branding and insisting that health warnings take up over half of the surface of the pack.

“The UK government rushed out the regulations, with many serious questions left unanswered,” PMI’s General Counsel Marc Firestone said in a statement. “A wholesale ban on branding distorts the market and treats consumers as if they’re not capable of making their own decisions.”

PMI was joined as plaintiff by British American Tobacco Plc (BATMF). The two are expected to seek some 11 billion pounds in damages, according the newspaper The Scotsman.

The law was approved by Parliament earlier this year and goes into effect in 2016. It comes of top of new restrictions on retailers that came into effect last month, stopping them from openly displaying cigarettes on sale.

On the street, the people who sell PMI’s products are skeptical of their suppliers’ chances. Many have already come to terms with the fact that the cigarette business is, for want of a better word, dying, and have moved on.

“You know who’s going to win,” says Mukesh, a newsagent and tobacconist in Southwark in south London. “It’s going to be the government.”

Mukesh reckons his sales of cigarettes have fallen by between 20%-30% in the month since he installed a new cabinet that complies, in complete and deadening monotony, with the new rules.

Big Tobacco’s woes in Europe don’t end there. Under proposed changes to the European Union’s directive on tobacco product use, it may soon become illegal to sell smaller packs of less than 20 cigarettes, a move intended to restrict cheap access to cigarettes and cut purchases by low-income or impulse buyers. Mukesh expects 80% of his most popular cigarette products will be outlawed a year from now.

PMI is already waging a similar campaign against plain packaging laws in Australia, through the unorthodox tactic of using a clause in a trade treaty with Hong Kong that guarantees the rights of investors in the country. Most controversially, it is paying other governments to sue Uruguay at the World Trade Organization in an effort to strike down its law requiring graphic health warnings on packs.