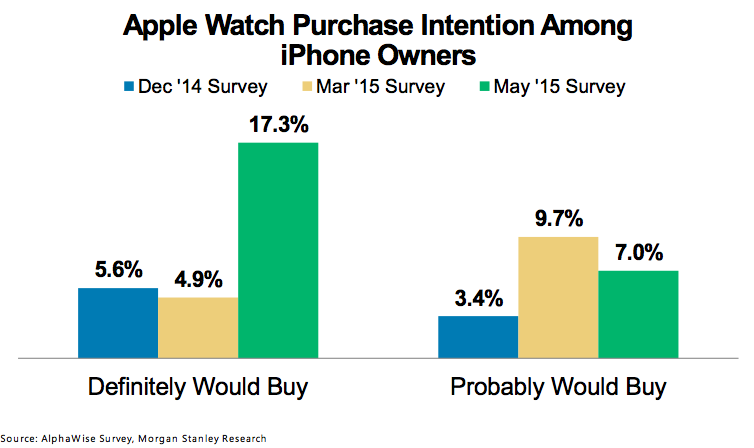 In a bullish note to clients issued late Wednesday, Morgan Stanley’s Katy Huberty raised her sales estimates for both the iPhone and Apple Watch.

That iPhones sales continue to track above expectations — as she reports — is not a big surprise. Demand for Apple’s first jumbo-size smartphones, especially in China, is hard to miss.

But her report that Apple Watch demand is rising was a bit of a head-snapper, coming as it did only hours after KGI Securities’ Ming-Chi Kuo claimed that demand was falling.

His track record on unit sales estimates, however, is mixed. He did well in the Christmas quarter; his 73-million-iPhone estimate was much closer to Apple’s sales numbers (74.5 million) than Wall Street’s consensus (66.5 million). But he blew it last quarter, predicting that iPhone sales had peaked when in fact they were still going strong.

Huberty’s track record is also mixed, but it’s longer, and she always errs on the side of caution. Her current estimates are based on Morgan Stanley’s AlphaWise surveys, which analyze Web searches to measure consumer interest. In three consecutive surveys — December, March and May — consumer interest in the Apple Watch has only grown stronger. In the most recent report, 17.3% of iPhone owners said they would definitely buy an Apple Watch and another 7% said they probably would. (See chart.)

If Apple could make watches fast enough to meet that demand, Huberty estimates, it could sell 50 million a year. But Apple can’t make them fast enough. So Huberty raised her 12-month estimate to just 36 million from 30 million, with this caveat:

We believe this remains a conservative estimate of demand given 1) it implies only “definitely” buy responses convert to purchases as opposed to those that said “probably” which we include in the bull case, 2) it assumes 50% US mix despite current iPhone installed base mix closer to 30%, and 3) it doesn’t consider the increasing iPhone installed base since the beginning of the year.

If I were a betting man, I’d go with Katy, not Kuo, on this one.