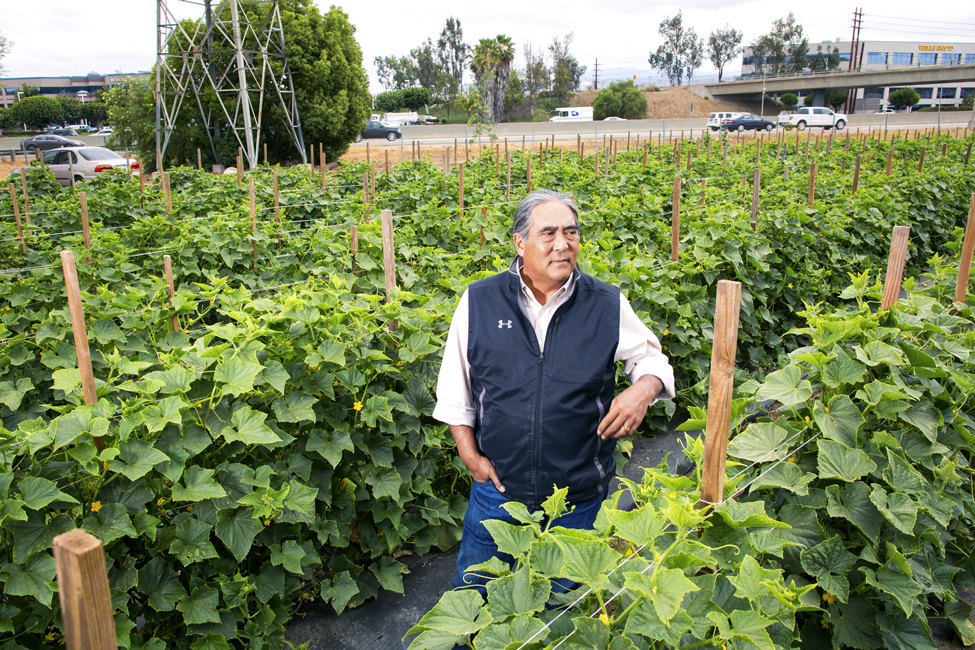 This is what passes for farmland these days in Orange County, Calif., population 3 million: a 22-acre rectangle in Irvine flanked by apartment buildings on two sides, with a Wells Fargo bank on a third. That the plot is thick with organic yellow squash—that it’s “farmland” at all, really—is thanks in part to the electric-power transmission lines towering overhead, which deter its development.

A.G. Kawamura specializes in growing fruit and vegetables on land like this. He farms fields on an active U.S. Naval Weapons Station, an abandoned golf course, and a decommissioned Marine airfield. He leases land destined for development, works it, then moves on just before ground breaking.

Kawamura’s days don’t match the stereotype of a farmer. He spends a good part of his time in his white Chevy Tahoe, negotiating suburban traffic, as he drives among his 40 parcels of land, which are located as much as 40 miles from one another. (“Good tunes and Bluetooth hands-free help tremendously,” he says.) As Kawamura, 59, passes a construction site in his truck, he sounds nostalgic. “See the yellow tractors?” he asks. “They’re building—on top of one of my strawberry fields—a campus for Broadcom.”

In some respects, Kawamura is an accidental pioneer. His family originally rented spare land because residential development was making it prohibitively expensive to buy. But he has become an innovative thinker and practitioner working on a crucial issue for our time: how we produce our food and get it to customers.

His method isn’t easy. Kawamura and his brother Matt toyed with moving their company, Orange County Produce, someplace with more available land. But they abandoned the idea a dozen years ago when they sensed that America was falling in love with local food. Today, with that romance in full bloom, they’re carving out a niche as one of the answers to a pressing question: Can truly local food be produced on a large scale?

Farmers’ markets are booming these days, as are community-supported agriculture (CSA) schemes, in which consumers pay a subscription fee in exchange for regular deliveries of produce. Farms have cropped up in unlikely venues: in cities such as Detroit and even as the centerpieces of new suburban subdivisions. But these burgeoning direct-to-consumer arrangements still provide less than 1% of the nation’s food.

Consumers want more. Some 25% of America’s shoppers seek out local food in the supermarket, according to a Food Marketing Institute survey. In a recent National Grocers Association poll, 59% said they eat locally grown food at least three times a week; “more locally grown foods” was the second-most-desired improvement, after lower prices.

Satisfying this desire can be a challenge. The large farms that can consistently deliver the quantities supermarket chains need tend to be far from urban customers. The truly “local” farms are usually too small to deal with supermarkets.

The Kawamuras are just the right size for their locale. With the help of 75 full-time employees and up to 400 on harvest days, they work 1,000 acres split among their 40 fields. (They also market produce for five other growers.) Farming in the nation’s sixth-most-populous county, on the doorsteps of Los Angeles, San Diego, and San Bernardino, Kawamura is less than 90 minutes by truck from more than 20 million people. “We can deliver to this regional market hours after we harvest,” he says. “Nobody else can do that.”

Kawamura estimates that 75% of what he grows is consumed nearby. Twenty years ago, 70% was shipped out of state. “We are regularly asked now to participate in ‘meet the farmer’ events at our local chain stores, from Albertsons to Ralphs, Costco (COST), and Whole Foods (WFM),” he says. Shoppers “are usually surprised to know that there are still farmers nearby.”

Some are probably also surprised that the farmer nearby is a ponytailed third-generation Japanese American whose parents and grandparents were held in internment camps during World War II. And that he spent seven years as California’s secretary of food and agriculture during the governorship of Arnold Schwarzenegger. (A Democrat while majoring in comparative literature at Berkeley in the 1970s—an aficionado of Jack Kerouac, he almost dropped out to become a writer—Kawamura says he has “been a Republican since I started signing checks.”)

Dan Glickman, who was U.S. secretary of agriculture in the Clinton administration, calls Kawamura “a man for the modern times of agriculture”—entrepreneurial, resourceful, and well-versed in the latest production and marketing methods. He is at the forefront of what Glickman calls “the seminal idea in agriculture”—the relationship between what society encourages farmers to grow and health.

Consumers consider local food healthier and tastier. They think it’s better for the environment. And they like supporting small farmers. But urban growing poses challenges: disappearing farmland, astronomical rents (Kawamura pays seven or more times what a rural Midwesterner might pay) and water prices, and neighbors touchy about smells, noise, and dust.

“A lot of urban agriculture has been about very small-scale steps focused on home food production or very limited production, not commercial scale,” says Neil Conklin, president of the Farm Foundation, which promotes dialogue on agriculture issues. “What he does is truly remarkable.”

Kawamura has grown more than 30 different crops on fields that fluctuate so steadily that not one of the 1,000 acres he works today was among his 1,000 acres 30 years ago. Today he raises everything from organic cabbage to peppers to radicchio; he focuses on green beans and strawberries, which supermarkets will pay a premium for. In addition to grocery chains and produce brokers, he sells to white-tablecloth restaurants. He has sold at farmers’ markets and is thinking about a CSA.

As tastes have changed, the Kawamuras have altered growing methods too. Today their output is 30% organic and rising. They’d go 100% organic if they could; it can be much more profitable. But certifying a field organic takes three years. They can’t always be sure they’ll retain a plot that long. Even on conventional ground, Kawamura uses composting and other organic techniques.

More adaptations lie ahead. Kawamura is working with consultant Erik Cutter on a one-acre plot in Irvine’s Great Park, part of a decommissioned Marine Corps air station, to figure out how large quantities of food can be grown on even less land with even less water and fertilizer. In one experiment, Cutter and Kawamura are cultivating soil that teems with microbes, nematodes, and other life—20% organic matter. (Most soils are less than 5%.) They pack this supersoil, along with seeds for celery, fennel, and other vegetables, into “socks” made of cloth. They then plant the socks in a field; the cloth protects the plants from weeds and pathogens. Meanwhile, they collect the runoff from the soil box in “teas” so rich they can substitute for fertilizer. Kawamura hopes to adapt it for use on a hundred acres or more.

“What A.G. does, probably to a great degree more effectively than other farmers I know, is look at the 50-year horizon, 60-year horizon, and ask some hard questions,” says Dave Puglia, a senior vice president at Western Growers, a trade group Kawamura once chaired.

On one border of the Great Park, 9,500 homes are being built, and Kawamura dreams of feeding the homeowners, perhaps in a CSA. His fields are so close he could practically toss food over the fence to them. In preparation, he is learning to cultivate fruit trees in the park—pomegranate, persimmon, and peach, among others.

The noise, odor, and other restrictions on farming in populated areas are already part of life. Like many farmers, Kawamura feels overregulated but says, “We have to be a good neighbor.” In one community he dispatches a truck six days a week to water the roads and reduce dust. He delivers baskets of produce to unhappy residents. When a woman complained about a “tacky” lunch truck outside her window, he says, “I apologized but told her that my crews needed to eat—and that the next day it would be further down the road.”

It helps that Kawamura has a low-key, listen-to-all-sides personality. “He doesn’t get into battles with people,” says Michael Dimock, president of Roots of Change, a nonprofit advocating a “healthy, equitable, and sustainable food system.” As secretary of food and agriculture, Kawamura pushed to create a “vision” for California agriculture and included food and environmental crusaders in the conversation. The result was 12 strategies, from improving access to healthy food to promoting robust regional markets. They earned wide support and largely remain in place.

Urban or rural, agriculture is a gamble, especially for fruit and vegetable growers, who get no government subsidies and have no futures market to hedge against wild price swings, like the one that took yellow squash from $35 for a 25-pound box to $14 in a single week last February. The dice rolls can be big: The upfront investment in an organic strawberry field can reach $25,000 an acre. Says Matt: “There aren’t many legal activities where within a six-month period you can double your money or lose everything.”

The Kawamuras have had some good luck. Their grandfather emerged from the World War II camp still owning a hay-hauling business, thanks to a cooperative Caucasian banker. That near miracle—many of the interned lost everything—enabled the family to get into produce. But no gambler wins every round. Two decades ago the Kawamura brothers endured a price slump so severe that it threatened the survival of their operation. Landlords have forced them off fields prematurely. Insects and diseases have taken their toll. Last year the well under their 12-acre field near San Juan Capistrano went dry.

Amid the worsening drought, the Kawamuras’ biggest problem has been unseasonal 90° heat in February and March. Some crops matured a month early; overabundance overwhelmed their ability to harvest it all. The Kawamuras will survive, but they worry about some of the growers they market for—and provide cash advances to. “In 30 years it’s the most difficult year I’ve seen,” Matt says.

Gamblers are optimists by nature. A.G. Kawamura is confident that agriculture will adjust to climate change and overgrazing and that world hunger will recede as new technologies stimulate farming in unconventional places. “We’re in a precarious place in human history,” he concedes, but we also have “more options and more tools and more knowledge than we’ve ever had before.” People will always need food—and even in a densely populated spot, there will always be a vacant lot that can be turned into green.