How the U.S. can confront China’s Great Wall of Sand 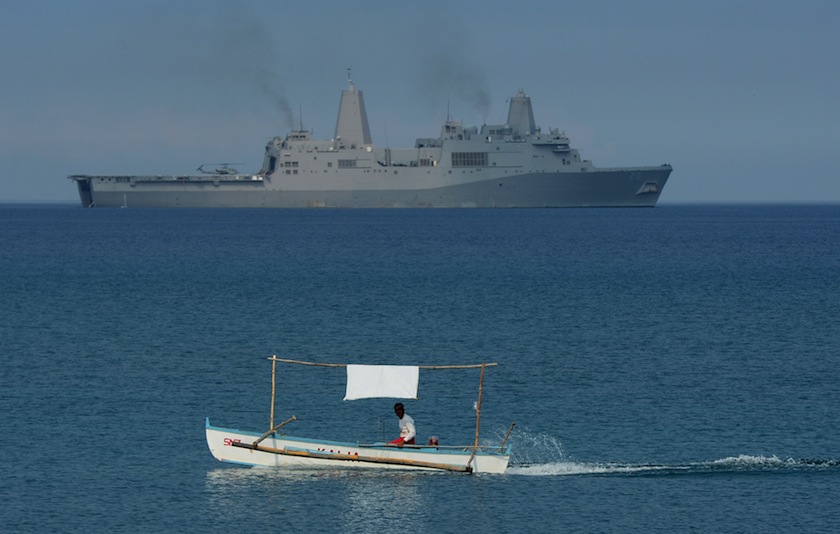 A Filipino fisherman is seen past the US Navy amphibious transport dock ship USS Green Bay (LPD-20) during an amphibious landing exercise on a beach at San Antonio in Zambales province on April 21, 2015, as part of annual Philippine-US joint maneuvers some 220 kilometres (137 miles) east of the Scarborough Shoal in the South China Sea. The Philippines voiced alarm April 20 about Chinese "aggressiveness" in disputed regional waters as it launched giant war games with the United States that were partly aimed as a warning shot to Beijing. AFP PHOTO/TED ALJIBE (Photo credit should read TED ALJIBE/AFP/Getty Images)
Photo by Ted Aljibe—AFP/Getty Images

Not too long ago, if you had to guess where the U.S. and China could get into a direct military confrontation, the waters around the Senkaku-Diaoyu Islands—over which China and Japan, an American treaty ally, had been embroiled in bitter territorial disputes—would be as good a bet as any. Today, though, the South China Sea seems a much better candidate.

The Pentagon is seriously considering a robust response to recent Chinese activities in the disputed areas in the South China Sea. Since late 2012, China has been stepping up its efforts to turn the coral reefs it occupies into large artificial islands. Its progress is so rapid that recent satellite pictures show that Chinese construction crews have successfully reclaimed large areas surrounding the six reefs in the Spratly archipelago currently occupied by China. Prior to these activities, the reefs were submerged during high tides. Today, they have been built into sizable artificial islands, one of which has its own cement plant and airstrip.

The construction and operation of these artificial islands in disputed waters have serious long-term implications. Technically, existing international law neither prohibits nor permits Chinese reclamation activities. To be sure, China is not the only country that has taken advantage of this legal lacuna. Vietnam, another claimant in the South China Sea maritime disputes, has also engaged in similar, albeit more modest, activities in the two reefs it occupies.

Washington has a few reasons to challenge Beijing’s moves in the South China Sea. According to the United Nations Convention on the Law of the Sea (UNCLOS), parties that exercise effective administrative control over unclaimed or disputed territories enjoy considerable legal advantages in establishing and defending their claims. Based on this doctrine, Chinese leaders have developed a sophisticated strategy. While a satisfactory legal resolution of the disputes in the South China Sea is unlikely in the short term, constructing artificial islands in the contested areas is the surest way to strengthen China’s bargaining position and legal claims. Once these artificial islands become operational and inhabitable, China can assert its sovereignty over the 12-mile territorial airspace and waters. Should Beijing succeed in further expanding these artificial islands and turn them into self-sustaining economic entities with its own sources of energy and fresh water supplies, China could even conceivably claim the 200-mile exclusive economic zone around these islands, as allowed under the UNCLOS.

For the United States, China’s strategy raises troubling concerns. Left unchallenged, China will almost certainly succeed in executing its clever plan. This will allow China to reject or contest, on a more favorable legal basis, the maritime claims of its neighbors and the freedom of navigation in the area prized by the U.S. Navy.

Since the other claimants, particularly Vietnam and the Philippines, have no means to challenge China’s activities, only the U.S. can intervene to thwart this plan.

Defense Secretary Ashton Carter has instructed the Pentagon to examine several options, such as flying American military aircraft over the airspace of these artificial islands and sending U.S. naval vessels within 12 miles of the islands to contest Chinese claims. Technically, such acts by the U.S. military, if peacefully sustained, may weaken, or even void, China’s assertion of sovereignty. Ironically, Washington appears to have imitated Beijing’s tactics in contesting sovereignty claims made by Japan over the Senkaku-Diaoyu Islands. At the height of the Sino-Japanese confrontation over these islands in 2012-2013, Chinese military aircraft and paramilitary vessels repeatedly entered the territorial airspace and waters to demonstrate that Japan had no effective administrative control over the islands.

However, the U.S. plan to confront China in the South China Sea carries significant risks, especially if it decides to send in armed military aircraft and vessels. The Chinese are likely to respond by sending its own military jets and warships to intercept them. One can imagine dangerous scenarios of accidents and collisions.

Of course, Washington can minimize the risks of accidental military clashes with China by dispatching unarmed aircraft and vessels. In addition, it can also demonstrate its even-handedness by sending similar aircraft and vessels into the airspace and waters surrounding the two artificial islands being constructed by Vietnam.

Ultimately, a face-saving solution will only come through diplomacy. So far, Washington’s diplomatic pressure has not changed Beijing’s mind or behavior. Now, with the Pentagon floating its own ideas of a muscular response, the Obama Administration should make Chinese leaders rethink their assumptions and options. Secretary of State John Kerry is heading to Beijing this weekend in another attempt to de-escalate tensions with China. He may have better luck this time.