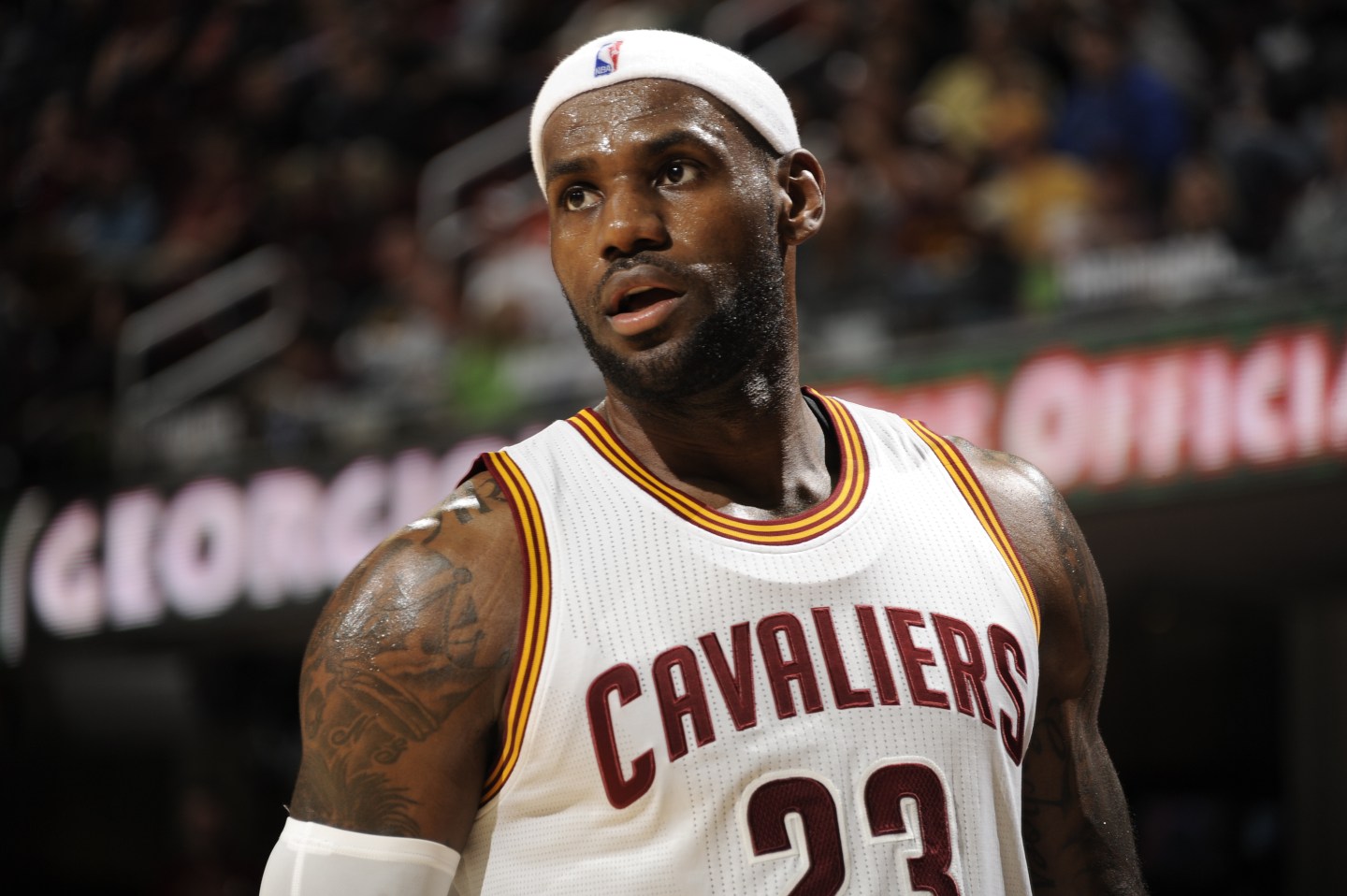 CLEVELAND, OH - OCTOBER 5: LeBron James #23 of the Cleveland Cavaliers looks on during the game against Maccabi Tel Aviv at The Quicken Loans Arena on October 16, 2014 in Cleveland, Ohio. NOTE TO USER: User expressly acknowledges and agrees that, by downloading and/or using this Photograph, user is consenting to the terms and conditions of the Getty Images License Agreement. Mandatory Copyright Notice: Copyright 2014 NBAE (Photo by David Liam Kyle/NBAE via Getty Images)
Photograph by David Liam Kyle/NBAE—Getty Images

Some years ago, I got a call from Lance Blanks, who was then the assistant general manager of the NBA’s Cleveland Cavaliers. I’d known Lance since his days as a basketball player for the University of Virginia, where I taught and helped the athletic program as a sports psychologist. Lance wanted to know if I would spend a day talking with LeBron James, then (and now again) the cornerstone of Cleveland’s franchise. I was happy to say yes.

I knew something about LeBron, of course. I knew the outer dimensions. He was six-eight, weighed two hundred fifty chiseled pounds, and had explosive speed. I knew he had been perhaps the most publicized high school basketball player since Kareem Abdul-Jabbar was known as Lew Alcindor.

I knew he’d been the NBA’s number one draft choice the year he finished high school and I knew he’d been a very successful professional for the Cavaliers. But until I had a chance to talk to him, I didn’t know the most important thing about LeBron. “I want to be the greatest basketball player in history,” he told me.

“Beautiful,” I thought. “This is a truly talented guy.”

It was not that he had the physical gifts. It was LeBron’s mind.

I’ve been encountering his kind of attitude on occasion for more than three decades, and when I have encountered it, I have almost always had the pleasure of working with some­ one truly exceptional. One of my first clients in this category was someone who could hardly have been physically more different from LeBron, professional golfer Pat Bradley. Pat had average size and average clubhead speed; nothing about her initial appearance would suggest athletic ability to most people. And that was not even the most significant difference. LeBron had been a prodigy of whom much was expected from the time he was maybe fourteen years old. Pat had grown up in golfing obscurity. She was a girl from New England, which is not a cradle of golfers because of the short golf season up north. She hadn’t gone to one of the colleges that traditionally has a strong women’s golf team. LeBron would have disappointed a lot of people if he hadn’t made himself into a great basketball player. Pat, had she been mediocre, would only have confirmed people’s expectations. When I met her, she’d been a professional golfer for eleven years, and she’d won one tournament.

She asked me if I thought she could do these things. I said, “I don’t know if you can do them, but I’m excited to work with someone who has your dreams.”

In the next ten years or so, Pat achieved all of those goals. So I certainly didn’t discourage LeBron from thinking he could be the greatest. I just asked him where he thought he stood with regard to that goal.

Sometimes, when I ask a client this kind of question, I’ll get a response that indicates a troubled mind. A golfer might say that he’s got the yips with his putter or his wedges. A singer might say she has stage fright. A businessperson might say that he’s freezing up when he makes sales calls. Initially, LeBron’s response was less about his mind than about his skills.

“I’m pretty darn good,” LeBron said, “but I’m not going to become the greatest basketball player in history if my teams don’t win championships, and my teams aren’t going to become champions if I don’t become a better three-point shooter.” (It tends to be forgotten now, but LeBron was not a finished player when he entered the NBA. He made only 29 percent of his three-point attempts in his rookie season.)

I wasn’t surprised to hear that opposing players would talk trash with LeBron, or that it would bother him. I’ve worked with enough athletes to know that the godlike images we’re fed by the media can often disguise reality. Superstars have doubts and fears just like the rest of us. So I nodded, and LeBron went on.

“I’ve started to think a little bit on my threes,” he ac­knowledged. “You know, I have some doubt about it.”

Yes, I knew. In basketball, as in golf, as in almost any sport involving motor skills, an athlete gets the best results when he doesn’t think. Once an athlete has learned a skill—as LeBron had learned to shoot a basketball—he needs to trust that skill, focus on the target, and let the shot go without thinking about how to do it or being concerned about the result. In slightly more scientific terms, the subconscious areas of our minds do the best job of controlling motor skills. When the conscious brain gets involved, our bodies tend to become awk­ ward. Doubt has a way of turning on that conscious brain, which is why confident shooters are better than shooters who lack confidence. A great deal of my work with athletes revolves around teaching them how to keep the conscious mind inactive or quiet when they’re performing.

I did tell him that I thought he could benefit from one of the standard methods of sports psychology, visualization. I wanted him to see himself making three-point shots. I sug- gested that he ask the Cavaliers’ staff to make a highlight video for him, about eight to twelve minutes long. This video would be a LeBron James long-range shooting montage. It would have LeBron making threes off the dribble. It would show LeBron catching the ball and making threes spotting up. It could have some of LeBron’s favorite music in the background, helping him to attach the good feelings associated with that music to the act of shooting threes. He would watch it every night. As he fell asleep, he could conjure up images of himself making three-point shots against tall, quick, tenacious defenders. He could let them fill his dreams.

All of this would help him improve his three-point shooting, because it would feed the right sorts of images to his subconscious, helping him become a more trusting, confident shooter. But if improvement were as easy as watching videos, the NBA would have a lot more great three-point shooters. It isn’t. The mental game is a big part of sport, but it must be combined with physical competence.

So I suggested that LeBron hire a shooting coach and work with that coach every day. I told him he needed to make maybe two hundred three-point shots off the dribble every day, imagining the best defender in the league guarding him. I told him he needed to make another two hundred catch­ and-shoot three-pointers. I told him I didn’t care how many shots it took to make those four hundred three-pointers, or how long it took. If he wanted to be great, he would find the time and find the energy. The actual number of shots I suggested was not as important, in my mind, as the idea that LeBron would set a practice goal for himself, commit to achieving it every day, and wait patiently for results.

I told him patience was essential because I had no way of predicting how long it would take to see improvement in his shooting statistics if he took my suggestions. But the patience and tenacity required were factors that could help him sepa­ rate himself from his peers. A lot of athletes might undertake an improvement regimen like the one I suggested to LeBron. But not many would stick with it. After a few weeks, if they weren’t seeing immediate results, they’d find a reason to quit. Maybe they’d decide the extra practice was wearing them down. Maybe they’d decide that they just didn’t have the talent to be a great outside shooter. They’d find a way to talk themselves out of it. To encourage LeBron to persevere, I told him about my belief that great basketball shooters, like great golfers and great baseball hitters, are for the most part made rather than born.

He and Pat Bradley had hard work in common. Pat didn’t make it to the LPGA Tour Hall of Fame just because she wanted to. She used that desire to fuel hours and weeks and years of dedication and practice. Her dreams were her starting point.

With LeBron, I also talked a lot about Bill Russell and Michael Jordan. Unlike golf, basketball is a team game. An essential part of being a great player is, in my mind, playing and conducting yourself in ways that make your teammates better. That, far more than scoring average, is the hallmark of a truly great player. Jordan and Russell were the players LeBron was chasing, because in addition to being great individually, they were players whose teams won many championships. They were great leaders. I suggested that LeBron read about Russell and Jordan and talk to them about leadership whenever he had the chance.

I was very impressed with LeBron James. He was attentive. He asked insightful questions. It was clear that he was disciplined and that he set very high standards for himself. He was more than just a superstar. He was a very coachable athlete on a mission to see how great he could become. I gave him the suggestions I did because I knew that his desire to be the best would empower him. The way he chose to think about himself would drive him through the workouts, the visualization exercises, and all the other things he needed to do to improve. That’s why the way he saw himself was his most important talent.

I have noticed a few things since I spoke with LeBron. One is that his three-point shooting has improved dramatically. It’s now roughly 40 percent, a one-third improvement over his rookie year. And I noticed, of course, that he switched teams, giving himself a better chance to win championships. And I have no doubt that the success LeBron has enjoyed is due to the kind of hard work we talked about that day, to his dedication to improvement, and to his strong commitment to team success.

Copyright © 2015 by Robert Rotella. From the book How Champions Think: In Sports and in Life by Dr. Bob Rotella published by Simon & Schuster, Inc. Printed by permission.