In Spain, with a recovery like this, who needs recessions? 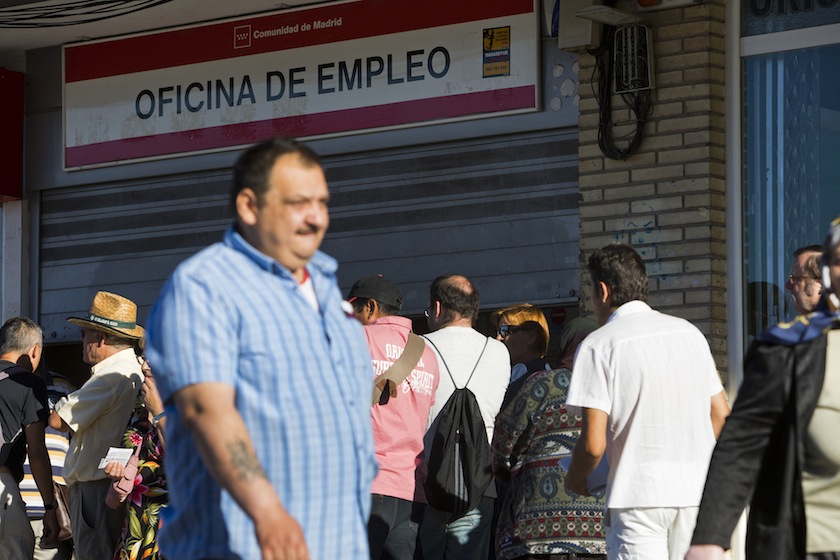 Jobseekers wait outside the shuttered entrance to an employment center before opening in Madrid, Spain, on Wednesday, July 23, 2014. While unemployment figures tomorrow will show that about a quarter of the workforce remains jobless, the government expects GDP to gain 1.2 percent this year after shrinking as much in 2013. Photographer: Angel Navarrete/Bloomberg
Photograph by Angel Navarrete—Bloomberg via Getty Images

In theory, Spaniards should be giddy. After years of stagnation, the country is growing. Both the European Commission and the IMF have recently raised their 2015 economic growth forecasts for Spain (to 2.8% and 2.5%, respectively), making it the fastest growing EU country save for Ireland, Poland, and precious few others.

There’s been plenty of praise, too: IMF Chief Economist Olivier Blanchard has noted the country’s “virtuous cycle” of confidence, investment, and consumption. And German Finance Minister Wolfgang Schäuble has called out Spain’s “far-reaching reforms,” mostly in labor and banking, as the reason for its recovery. Not surprisingly, the government of Prime Minister Mariano Rajoy has preened: “The contrast in growth is the result of this government’s economic policies. Spain is now a role model,” Economy Minister Luis de Guindos said recently.

And yet, support for Rajoy’s government and his party, the Partido Popular (PP), is in the toilet. In its most recent voter survey, Spain’s public polling center, the Centro de Investigaciones Sociológicas (CIS), estimated that the PP would receive 25.6% of the vote in an election, the lowest figure for the party since polling began in 1996. Fully 70% of those surveyed said the country’s economic situation was bad or very bad, over 75% said it was the same or worse than a year ago, and only 28.8% said they expected it to be better next year.

So, what’s up with Spain’s recovery?

First off, it bears noting that the recovery in fact exists. Spain has posted positive GDP growth since mid-2013; employment as measured by social security signups has been growing for over a year and is up by 578,243 people, or 3.52%, in the last 12 months; and consumer confidence is at a record high. In the words of Javier Díaz-Giménez, a Madrid-based economist and professor at the IESE Business School, one would have to be “freaky” to interpret the data as anything but a recovery.

But it’s a recovery that feels precarious and unreal for many Spaniards, and for good reason. The Spanish government has noted that half of the nation’s predicted GDP growth is based on three external factors: low oil prices, a depreciated Euro (which helps exports), and low interest rates. Of course, these factors affect the entire Euro zone, but they put any economic recovery on shaky ground.

And while Spain’s current recovery is intense, it’s also late. The GDP of countries like the UK, France, and Germany (and the U.S.) have recovered what they lost in the global financial crisis and have reached new highs, but the recession and stagnation in Ireland and Southern Europe (the “PIIGS”) was so deep and long that Spain won’t return to its pre-crisis GDP for another 18 to 24 months.

For most Spaniards, however, the real problem is employment—or rather, the lack of it. Only 59.9% of people in Spain between the ages of 20 and 64 are employed, putting the nation ahead of only Italy, Greece, and Croatia in the EU. Over 3 million jobs in Spain disappeared between 2008 and 2013, and less than a million have returned.

Worse for many Spaniards is that the jobs that have been created offer little security. Spain has a dual system: people either work on temporary contracts, under which they are easy to lay off, or they work on indefinite ones, under which layoffs are expensive. Not surprisingly, many employers exploit the differences to keep costs down.

Of the 4 million employment contracts signed in Spain during the first three months of the year, over 90% were temporary, and of those, 24% were for seven days or less. That’s why 24% of Spanish workers are temps, 10 points above the EU average and second only to Poland in the region.

This hurts productivity (there’s little reason to train temporary employees), keeps wages low, and adds to a general feeling of insecurity. Because of wage deflation, young workers earn less in terms of purchasing power than they did in 1990, according to Jansen. It’s not rare for a young person to earn less in real terms that his parents did when they entered the workforce, he says.

There are plenty of other worries as well. In his review of Spanish economic data, “Spain’s Economic Recovery: Glass Half Full Or Glass Half Empty?” economist Edward Hugh balances positive news with issues such as deflation and population decline. And Juan José Toribio, emeritus professor of economics at IESE, points to the danger of political paralysis, as policymaking will essentially stop between now and the end of the year, when national elections are scheduled to take place. “The most probable scenario is chaos until the general elections,” he says.

Still, Spain’s economy is growing and more people are working, positive developments that few people could have imagined even two years ago. And that is reason for joy, if only a little.

“We can’t expect that a country that’s gone through a crisis like Spain has will have a recovery that will be totally solid with high quality employment and good wages in leading industries,” Jansen says. “There is a lot of work ahead to correct structural problems. But I think we have to celebrate that we are creating employment. Yes, it’s more precarious than we’d like, but better precarious than nothing.”