To arms, to arms! The world’s biggest financial firms rise up against Bloomberg’s terminals 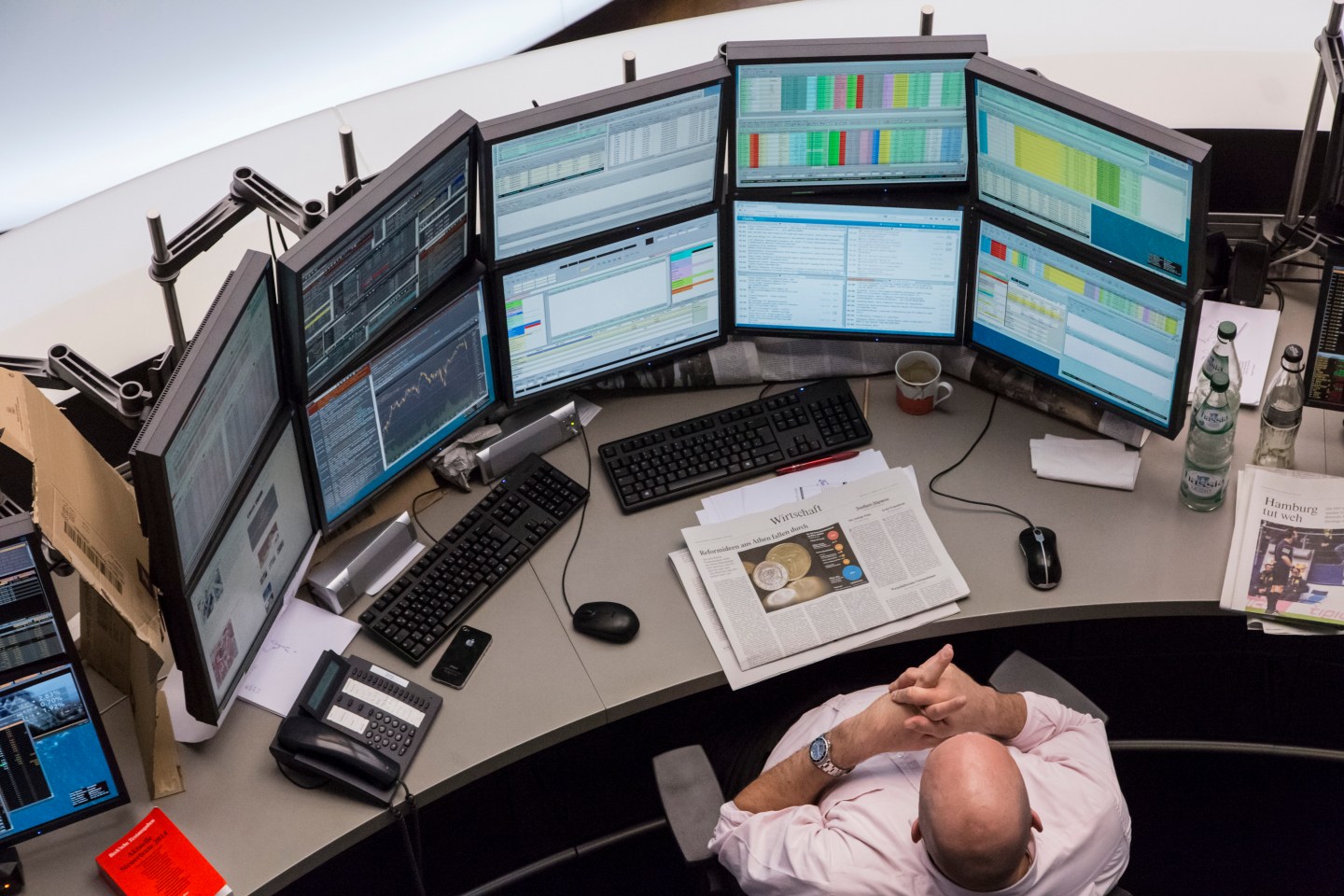 A financial trader monitors data on computer screens at the Frankfurt Stock Exchange in Frankfurt, Germany, on Monday, March 9, 2015. With the European Central Bank buying its first government bonds this week to shore up the region's economy, options traders are showing little concern that the DAX Index might decline. Photographer: Martin Leissl/Bloomberg
Photograph by Martin Leissl — Bloomberg via Getty Images

Since the early ‘90s, Bloomberg has dominated the financial communications market, its terminals serving as key entry points into the world’s financial corridors. Costing more than $20,000 a piece per year and connecting more than 320,000 clients with critical information, Bloomberg’s terminals are the industry standard when it comes to secure, instant messaging.

Still, financial firms are tired of the terminal’s exorbitant price tag, and many traders are still wary after Bloomberg reporters were caught snooping the activity of terminal users last year. (Bloomberg issued an apology and updated its newsroom rules in an effort to prevent such an incident from reoccurring.)

Goldman Sachs, one of the most vocal gripers in the Bloomberg affair, is the principal investor in Symphony. The consortium shelled out $66 million in total. Founded in 2012 by Frenchman David Gurle (who hails from Cannes and previously worked at Microsoft, Thomson Reuters, and Skype), Perzo—since renamed Symphony—may soon offer a proprietary alternative to Bloomberg’s premium messaging tool. One advantage: the product grants enterprises control over how and with whom their employees chat, an appealing feature for those looking to comply with regulatory Chinese walls. (Bloomberg declined to comment.)

Gurle is an interesting figure himself. Not only does he have a background at several big-name companies, he’s also a licensed pilot who occasionally flies medical missions to transport organs and patients from airfield to hospital. He initially pitched the idea for a unified communications service—one that bundles messaging, voice and application sharing—at a meeting with Bill Gates in 2000. It went well. “If you’re in a product review with Bill, you’ll hear him say, ‘This is the stupidest idea I’ve ever heard,’” Gurle says. “I didn’t hear that comment, so it was a very positive outcome.”

Symphony can be considered a rebirth of that initial pitch. “Project Phoenix,” as the Microsoft endeavor was dubbed, evolved into Microsoft Lync, a business communications system. After leaving the software giant in 2003 to lead collaborative services at Thomson Reuters for seven years—Gurle’s first foray into the financial world—he joined Skype, where he headed the company’s enterprise business division. A year later, Gurle’s former employer Microsoft purchased Skype, bringing his career full circle. (The company recently announced that Microsoft Lync will be renamed Skype for Business next year.) Now Gurle has turned another revolution, returning to Wall Street.

Salman Ullah, a partner at the venture firm Merus Capital who two decades ago worked with Gurle on Microsoft Lync and later became one of Perzo’s earliest funders, believes the service “has the potential to be the WhatsApp for business,” as he put it. Last year, his firm invested $200,000 in Symphony’s seed round. Earlier this year, the firm upped its contribution, injecting an additional $3.5 million.

“Everybody has speculated about how Symphony could be a Bloomberg killer,” Ullah says. “We didn’t even know what it was. We were so decoupled from that world.” Now Ullah is more familiar. He describes his shock at first seeing the interface of the Bloomberg terminal: “I couldn’t believe it. I thought they were pulling my leg,” Ullah says. He compares the experience to coding in the démodé programming language Cobol from the ‘50s. “It’s like clay tablet era,” he says. Indeed, the Bloomberg system has seen few updates to its hardware or software interfaces since in the 1980s, a fact that’s elicited some criticism and even prompted user-interface IDEO to imagine a possible UX redesign for Condé Nast Portfolio magazine in 2007.

For Gurle’s part, his ambition exceeds unseating Bloomberg. With plans for a full release by this summer, he would like his end-to-end encrypted messaging tool to sweep the currently fragmented landscape (cluttered with Bloomberg chat, Thomson Reuters Eikon, AOL Instant Messenger, Yahoo chat, Gchat, etc.) with an all-in-one, fully compliant alternative. He hopes it will be just as popular with consumers as businesses.

As CEO of Symphony, Gurle plans to make the service open source, so people can build features, like content and news elements, on top, unlike the closed Bloomberg system. He also aims to embed helpful contextual intelligence in Symphony, such as an automated personal assistant. The service will likely be free with three paid tiers, he says, mentioning add-ons like access to corporate directories, unlimited storage, regulatory compliance, and network redundancies. In terms of the paid tier pricing, he expects: Professional (less than $10 per month), Enterprise (between $15 and $20 per month), and Enterprise Plus (less than $30 per month).

“I’m going to make a very bold statement,” Gurle declares. “If we end up forcing you to use two different communication tools—inboxes, let’s call it, for lack of a better term—then we have failed,” he says. “Then we will not have simplified your life, we will have made it more complicated.”

While that statement has yet to be proven, major enterprises are already putting a lot of faith in Symphony. Darren Cohen, then head of principal strategic investments at Goldman Sachs and who helped spark the merger tête-à-têtes, has been a firebrand within the consortium of investing companies. Goldman Sachs now leads the pack in adopting Symphony, and the company has already folded its former tool—Live Current, which allows employees to easily grab and share tweets (where news often breaks)—into Symphony. Though Cohen was unable to provide comment for the story, odds are good that he and his superiors are pleased with the deal; he has since been promoted to partner. The bigger question is whether Symphony will see a promotion of its own from ambitious startup to the new gold standard of the financial industry.

Correction, May 11, 2015: An earlier version of this article misstated the number of members in the consortium of financial services companies. There are 15, not 14.