What happens to your employer if you die at work? Not much. 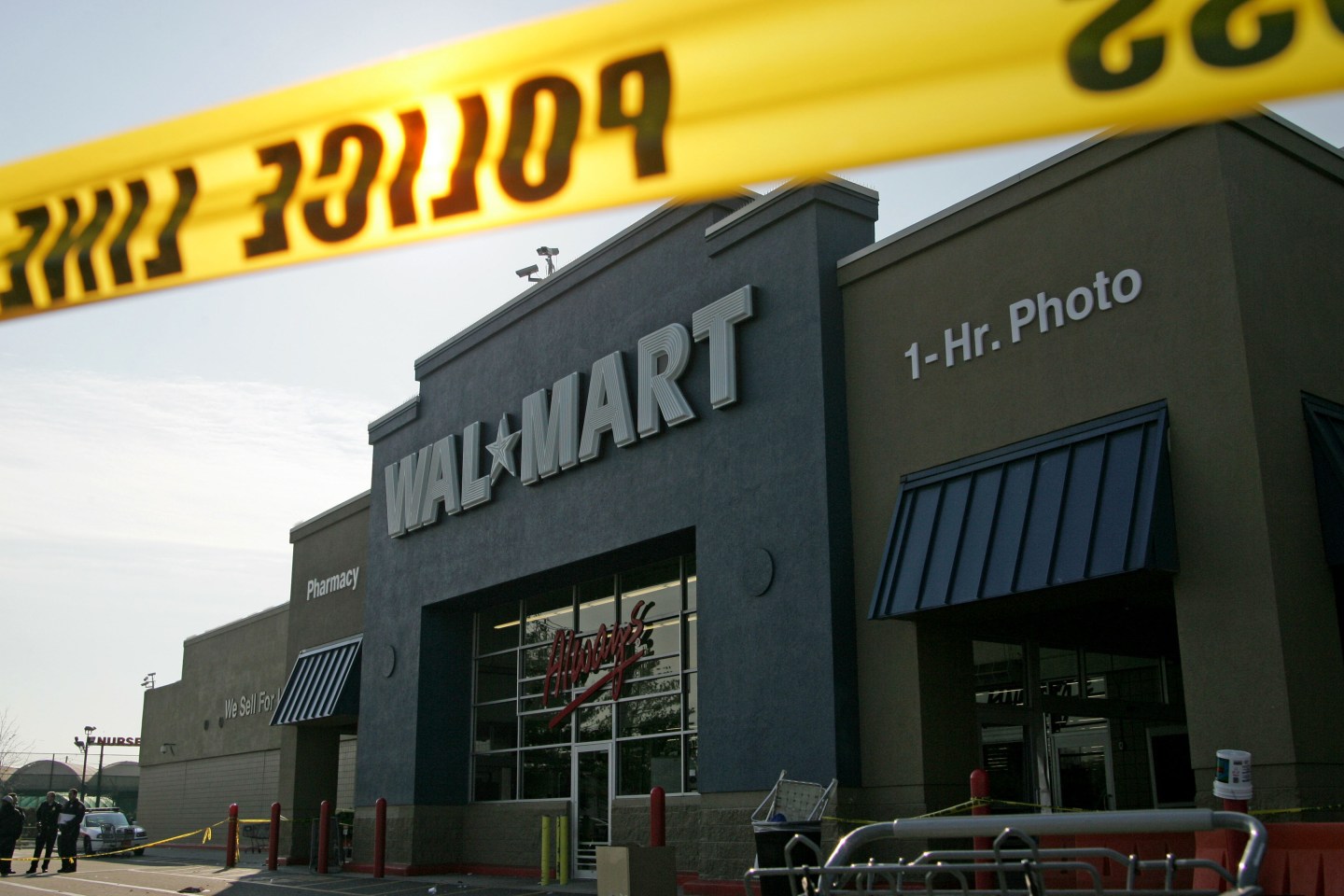 FILE - In this Nov. 28, 2008 file photo, Nassau County Police examine the front of the Wal-Mart in Valley Stream, N.Y. where Jdimytai Damour, a temporary Wal-Mart worker, died after a throng of unruly shoppers broke down the doors and trampled him moments after the Long Island store opened for day-after-Thanksgiving bargain hunting. Wal-Mart on Wednesday, May 6, 2009 agreed to pay nearly $2 million and improve safety at its 92 New York stores as part of a deal with prosecutors that avoids criminal charges in the trampling death of a temporary worker last year. (AP Photo/Ed Betz, file)
Photograph by Ed Betz — AP

On Thanksgiving in 2008, shoppers began to line up outside a Walmart store in Long Island, N.Y. at around 5:30 p.m., in anticipation of the store’s Black Friday Blitz Day 5 a.m. opening. By 3 a.m., a crowd of 2,000 had amassed, and when the store finally opened at 5 a.m., customers bulldozed a vestibule and knocked the doors off their hinges as they raced to grab discounted TVs.

A 34-year-old Wal-Mart worker, Jdimytai Damour, got caught in the stampede. His fellow employees tried to protect him from the stampede, but Damour was trampled and died of asphyxiation.

For the incident, Wal-Mart was fined $7,000. The penalty is notable, not only because Wal-Mart spent six years appealing it, but also because the small sum is completely standard.

The ugly truth is that when it comes to ensuring your safety on the job, your employer has very little to lose.

According to a report from the AFL-CIO that was released last week, in fiscal year 2014, the median civil penalty in fatality cases investigated by the federal Occupational Safety and Health Administration was $5,050. The maximum penalty for a “serious” violation—one in which there’s a substantial probability of death or serious injury—is $7,000; for willful and repeat violations, it’s a maximum of $70,000.

Criminal repercussions for workplace safety violations are just as puny. Prosecutions are only possible if there’s evidence of a willful safety violation—a rather high burden of proof. And even then, if an individual employee is found guilty of violating of OSHA rules, he or she faces brief jail time: a maximum of six months for what’s considered a misdemeanor. Since 1970, when the Occupational Safety and Health Act became law, only 88 workplace fatality cases have been prosecuted, despite 390,000 workplace deaths took place during that time frame. The defendants who were convicted have served a combined 100 months in jail.

Because of the high bar for prosecuting worker deaths, such incidents “[are] generally not viewed as something that the Department of Justice has put time and resources toward,” says Peg Seminario, safety and health director for the AFL-CIO.

Why are the penalties for worker deaths so paltry? Mainly, it’s because the Occupational Safety and Health Act was written that way.

At the time of the act’s passage in 1970, “there was hesitation to give too much power to one entity,” says Joseph Seiner, an employment law professor at University of South Carolina. Congress decided to “see how the statute played out.” It hasn’t been amended since.

While the act itself has not changed, there have been attempts to bulk up workplace protections. Half of all states have adopted their own OSHA plans, which must set workplace safety standards and penalties that are at least as stringent as ones at the federal level. California, for instance, has the highest average penalty, at $5,733 per serious violation.

Last week, Los Angeles County prosecutors charged two Bumble Bee Foods workers with willful violations of safety regulations—which resulted in three felony counts each—in the gruesome 2012 death of a Bumble Bee worker who was trapped inside an oven as it sterilized tuna cans. The workers could serve up to three years in state prison and be forced to pay fines of $250,000 each. The company faces a maximum fine of $1.5 million.

The Justice Department has tried to use the nation’s tougher environmental statutes to mount stronger prosecutions of workplace safety violations by focusing on companies that put workers in danger while violating environmental laws. For instance, a subsidiary of British Petroleum pleaded guilty to a one-count felony violation of the Clean Air Act for an explosion at an oil refinery in Texas in 2005 that killed 15 workers and injured more than 170 others.

All that said, criminal prosecutions are still rare and the median penalty per worker death in 2014 represents a decrease from the previous year—$5,050 versus $5,600.

Senator Al Franken last week took a step toward giving the 45-year-old Occupational Safety and Health Act a bit more bite. He introduced a bill that would make felony charges available for an employer’s repeated and willful violations of OSHA that result in a worker death or serious injury. The bill also sets a minimum penalty of $50,000 for a worker fatality caused by a willful violation. Lawmakers have introduced similar bills before and have not found success. With Republicans in control of Congress, the bill will likely die.

Meanwhile, the overarching statistics about workplace fatalities tell a somewhat encouraging story; they’re down—4,585 in 2013 compared to 4,628 in 2012. But still, the lax penalties for putting workers in harm’s way is a “disincentive” for employers, Seiner says. They give little motivation “to create the type of safety measures that in this day and age seem like common sense.”