Comcast earnings and revenue rise thanks to broadband subscriptions, but what’s next? 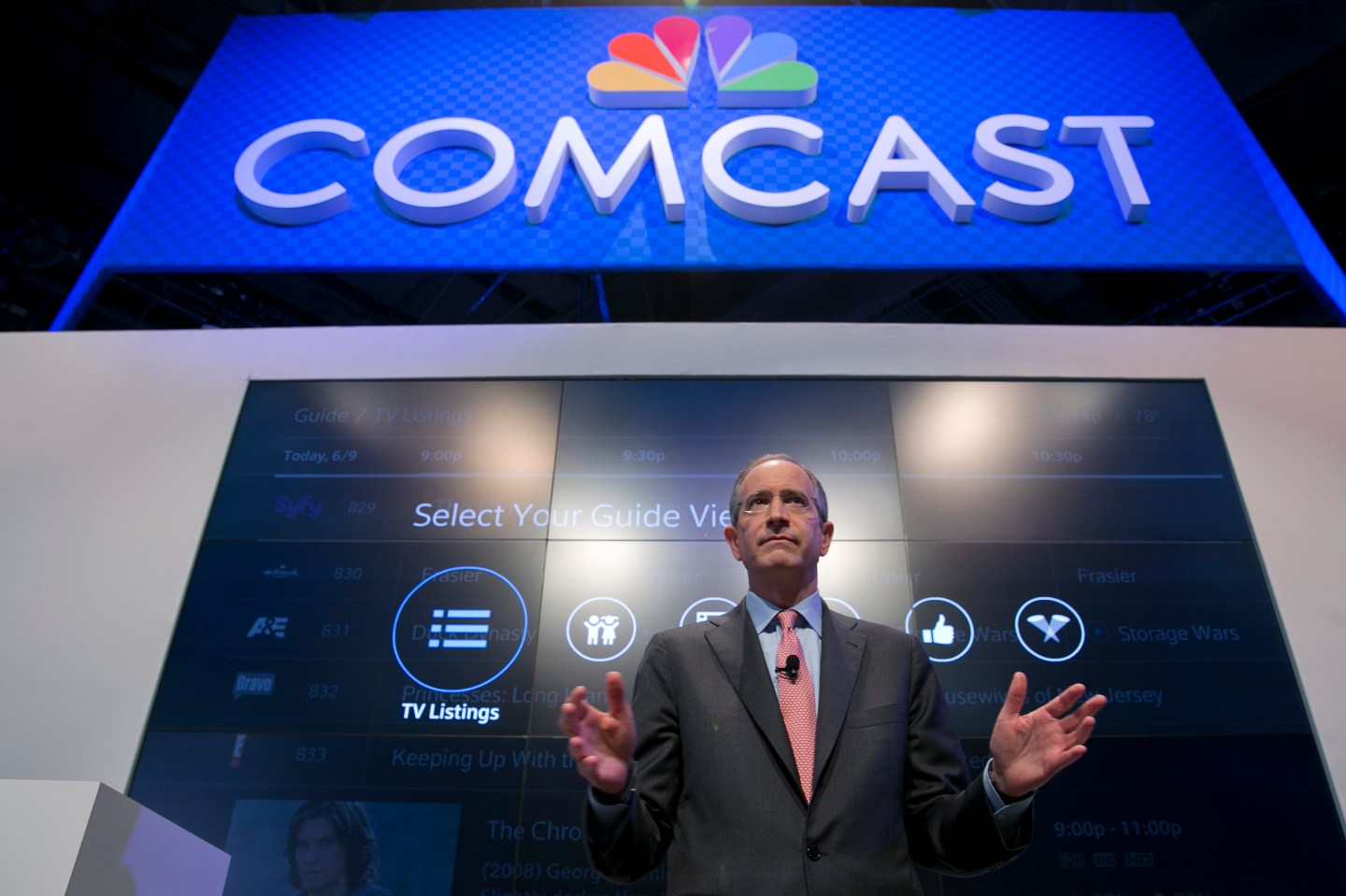 Brian Roberts, chairman and chief executive officer of Comcast Corp., speaks during a news conference at the National Cable and Telecommunications Association (NCTA) Cable Show in Washington, D.C., U.S., on Tuesday, June 11, 2013. The Cable Show is expected to bring in more than 10,000 attendees with 286 companies on the exhibit floor. Photographer: Andrew Harrer/Bloomberg via Getty Images
Photograph by Andrew Harrer — Bloomberg/Getty Images

Less than two weeks after the collapse of its $45 billion bid for Time Warner Cable, Comcast beat earnings and revenue estimates and showed strong growth in broadband subscriptions. But life after TWC will never be the same.

There are many ways to handle a failure. Comcast seems to be taking the high road: “Of course we’re disappointed,” CEO Brian Roberts said about the collapsed bid to merge with Time Warner Cable, speaking to investors on a call Monday morning. “But really, we’ve moved on.”

Of course, moving on is easier if you’ve still got plenty of growth to show investors, and Comcast (CMCSA) has that in spades—thanks to its healthy Internet business. Also on Monday morning, the company once known as a cable TV giant, reported higher-than-expected first-quarter earnings and revenue that were primarily driven by a rise in broadband subscriptions. Just how big of a rise? Huge. The number of high-speed Internet customers increased by 407,000 in the first quarter of 2015, representing revenue growth of over 10% (the strongest rate of growth in this category in over four years). In fact, Comcast now has more Internet subscribers than video customers—that number actually declined by 8,000 in this most recent quarter.

This, coupled with the failed bid for TWC, puts Comcast in a very different position than before. Future growth won’t come from an increased geographic footprint, and it won’t come from selling more pricey TV bundles. The future will largely depend on whether or not Comcast holds onto its existing dominance in broadband (there aren’t a lot of other options out there for broadband customers today, but that’s slowly changing) and how fast it can transition from a company that has been consistently ranked at the bottom of customer service surveys into an innovative creator of Internet-focused products that customers actually want.

For now, though, the growth is evident, and the effect of the failed TWC talks is not.

Overall, the company reported a profit of $2.06 billion, up from $1.87 billion the year before. Revenue, meanwhile, increased 2.6% to $17.9 billion. Comcast also announced its plans to repurchase $2.5 billion in stock this year, bringing its total 2015 share repurchase plan to $6.75 billion.

“We are off to a great start in 2015, with 7.6% operating cash flow growth and record quarterly free cash flow,” Comcast CEO Brian Roberts said in a release issued Monday morning. “Cable had a terrific quarter, once again reflecting strong results in high-speed Internet and business services. We have made progress in transforming the customer experience while delivering improved products and innovations faster than ever before.”

While Comcast’s supremacy in broadband is unarguable—it provides Internet access to almost a quarter of the U.S. market, a big factor in regulators’ reluctance to pass its now-defunct bid for TWC—the progress it can make in “transforming” the customer experience is still TBD (to add another acronym that starts with a “T”). But Comcast apparently has some news coming up on this front: On this morning’s call with investors, CEO Roberts said that Comcast will unveil several announcements at a cable conference in Chicago later this week, many of which focus on “customer service and innovation.” (Stay tuned for more coverage on the cable conference tomorrow.)

Another big question for investors is whether or not Comcast will eventually embrace more a la carte offerings for consumers. Yes, traditional bundles aren’t going to disappear anytime soon, but unlike skinny jeans, so-called “skinny bundles” aren’t just a fad. Newer distribution models like Netflix, Amazon, Hulu and Google’s YouTube are also here to stay. And all eyes are on Comcast to see how it responds—or fails to respond—to this and other changes in consumer behavior.

Of course, the underpinnings of all this online content consumption is the network. While consumers may not care where their Internet connectivity comes from (as long as House of Cards stops buffering), the network has always been and will continue to be Comcast’s real, unsexy asset. The company has built out more than 145,000 route miles of fiber across its service areas, and says it has been doubling the capacity of its network every 18 months.

That’s not going to change, and Comcast has to invest in its network to provide increased speeds for existing and new customers. As regulators have made very clear, Comcast can’t grow by merging with another large cable player. So transitioning into an Internet and content player—one that provides connectivity and products its customers want—will be key to Comcast’s future growth.