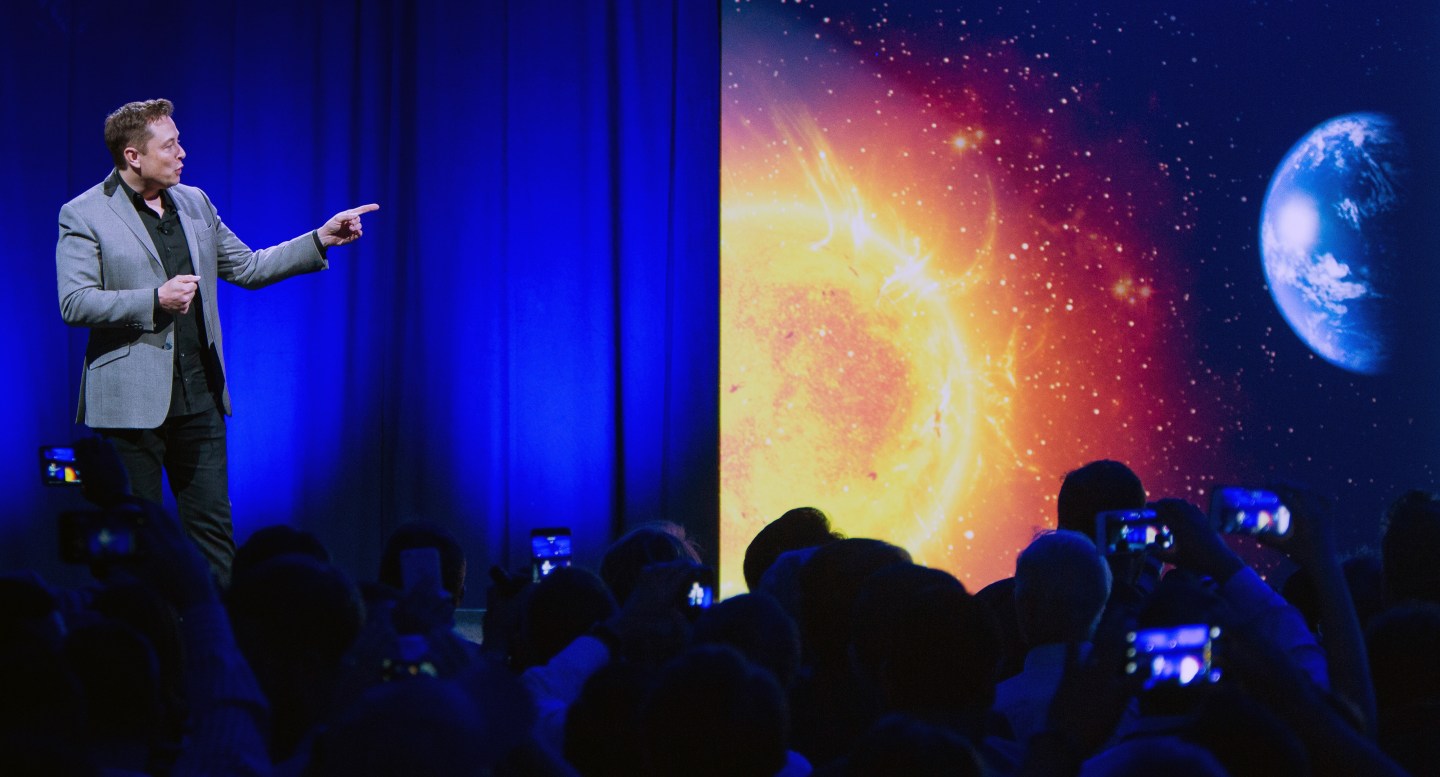 Musk first unveiled Powerwall, a sleek suitcase-sized 220-pound lithium-ion battery designed to store energy at the residential level, comes in 7 kilowatt-hour and 10 kWh sizes. The home energy battery, which has a 10-year warranty, is designed to be mounted on a wall and includes integrated thermal management, power electric, and a bi-directional DC inverter.

Musk described the home unit as a source of backup power which, when combined with solar panels, could be used daily to extend the environmental and cost benefits of solar after the sun has gone down. Tesla’s selling price to installers is $3,500 for 10 kWh and $3,000 for 7 kWh. Orders are being taken now and deliveries will begin this summer.

SolarCity (SCTY) CTO Peter Rive told me at the event that the company will charge customers $5,000 for the 10 kWh unit, a price that includes installation and an inverter to convert direct current power to alternating current for use in the home.

Musk also introduced Tesla’s Powerpack a scalable energy storage unit for heavy industrial and utility applications. The Powerpack will be sold in 100 kWh units and can be scaled up into multi gigawatt-hour class. The power packs are priced a $250 a kilowatt hour, Musk said.

Before the official launch, Musk and Tesla co-founder and CTO JB Straubel spoke to reporters about Tesla Energy. Here are five statements by Musk that stood out:

“Our goal is to fundamentally change the way the world uses energy at the extreme scale. We’re talking at the terawatt scale.”

“We expect to scale this internationally. It’ll scale as fast as we can scale it.” Straubel added that Tesla Energy will have a presence in parts of Europe, especially Germany, as well as in Australia by end of this year. The company will expand into China by next year.

By the way, are there any patents on these new products? Fuhgetaboutit.

“Tesla’s policy of open sourcing its patents will continue even with Powerwall and Powerpack and the gigafactory. And so we are hopeful that many others will follow our path and if somebody is able to make better battery solution than us, I’d be the first to congratulate them.”

About that gigafactory in Nevada… expect more.

Musk explained that the energy storage packs will be made initially at its Fremont, Calif., factory and will shift over to the first phase of the gigafactory.

The two products are connected to the Internet.

“All of the power walls and power packs are connected to the Internet and so we’re actually able to get real-time feedback. We’re able to work with the utilities to shift power around and actually manage the grid and we’ll integrate obviously with software like SolarCity’s. If there are other companies out there with compatible software like SolarCity we’ll integrate with theirs too.”

Straubel picked up the riff: “The batteries are very smart internally. They have all the same data and computation capability that the car packs do. So they can send the information to whoever wants to use it, redisplay it, or control it in different ways.”