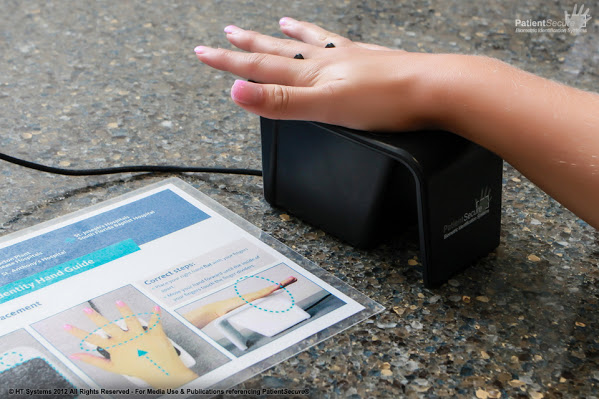 Imprivata, the healthcare IT security company, is going full-force into the patient identification market with its announcement today of its purchase of HT Systems, a provider of vein-scan biometric technology. Executives at Imprivata and HT Systems gave Fortune an exclusive preview of the deal this week, and said they would provide more details at Imprivata’s quarterly earnings call May 4.

Imprivata (IMPR) will pay about $19.1 million in cash plus additional payments for meeting retention and performance standards, which could value the deal at as much as $26 million.

The deal gives the Massachusetts-based Imprivata the technology it needs to develop a patient-facing security segment by expanding the reach of HT Systems’ PatientSecure platform. The biometrics system connects patients to their electronic medical records when they first show up at a hospital or clinic, and then accurately identifies them when they return, helping to prevent expensive insurance fraud and to avoid medical errors related to mismatched records.

Imprivata, which had $97 million in revenues last year, currently sells one-sign secure access solutions and medical messaging platforms for doctors. With the HT Systems purchase, Imprivata will have a new tool for interacting directly with patients.

“The next step in the digital health story is patient engagement, and we can’t engage without great identification systems,” said Omar Hussain, president and CEO of Imprivata. “If medical records go to the wrong place there’s a problem.”

HT Systems’ PatientSecure uses infrared lights to scan a patient’s palm to distinguish his unique vein pattern, which is then linked to the correct medical file. This type of technology is used around the world within a range of industries, in the U.S. as well as in places like Brazil and Japan.

The technology was originally developed by Japanese company Fujitsu and was initially rolled out by the Bank of Tokyo-Mitsubishi via its ATMs almost a decade ago. It served as an accurate and minimally intrusive form of two-step authentication, which helps prevent fraud by adding another layer of security. HT Systems has the exclusive rights to the technology within the U.S.

“When we started the journey down positive patient identification route, our biggest competitor was the status quo,” said David Wiener, CEO of HT Systems, who will join Imprivata as part of the deal. “No one else was doing it at the time.” Today, other larger biometrics companies compete in the space, including the likes of Gemalto and M2SY.

The patient identification market, driven by the rise of electronic medical records, is estimated to be worth about $2 billion globally, according to Imprivata. The company is going after a slice of that market with HT System’s technology; it plans to use its own wider-reaching sales force to grow the reach of the PatientSecure system beyond the 65 health systems it serves today.

Imprivata still has a challenge ahead of it. The No. 1 concern is patient adoption: No matter how good the technology, if a patient sees it as weird or intrusive they won’t use it, said Wiener.

Biometrics security expert Heidi Shey of Forrester Research echoed those concerns, which are true for the whole biometrics business regardless of industry. While people are getting more familiar with biometrics (see the fingerprint scan on the iPhone), there’s still a need for consumer education and ensuring these products work seamlessly.

“It’s one of those things where you only have one shot to get the consumers to buy into this, and if it doesn’t work as expected or there’s any difficulty, then it’s something they’re unlikely to use,” said Shey. “It has to be easy, and it has to be reliable.”